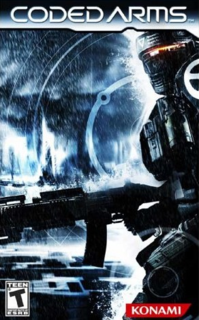 Konami's point-of-view shooter is first for Sony's handheld; game blasts into stores at a SRP of $39.99.

We hax0r the campaign and multiplayer modes in the PSP's first FPS, coming soon from Konami.

Konami's upcoming PSP game now has its own official site.

First-person shooting comes to the PSP this summer courtesy of Konami's Coded Arms.

Coded Arms jacks into the Web

Konami's upcoming virtual-reality action title will give early-adopting PSP owners a new shooter to sink their teeth into.

Decode yourself a pulse rifle and blast away with Konami's new PSP first-person shooter.