The first-person shooter genre may have a bright future on the PSP, but Coded Arms isn't it.

Konami's Coded Arms has the distinction of being the very first first-person shooter developed for the PSP. Unfortunately, that's where its level of distinction starts and stops. In Coded Arms, Konami has created a shooter so rooted in old-school-shooter design that it feels like a relic from too many years ago. You'll find yourself wandering through randomly generated corridor after randomly generated room, blasting merely competent robots and insects with a scattershot collection of weapons. The control scheme works, but it takes more time getting used to than may actually be worth your time. And the included multiplayer is made less fun by the game's lousy collection of maps. While you might be able to forgive some of Coded Arms' problems simply for the fact that it's the first game of its kind on the system, this kind of forgiveness can only take a game so far, and in this case, it's not quite far enough.

If there's one big question mark that Coded Arms manages to do away with, it's whether or not the PSP can do FPS controls. After all, the genre is at its best when played with a keyboard and mouse (and, to a lesser degree, two analog sticks), so how would the PSP's controls handle a game of this type? As Coded Arms demonstrates, the PSP can most definitely do a controllable FPS, but it takes a bit of doing. For starters, Coded Arms' default control scheme is complete trash. It relegates your look movements to the four face buttons and assigns movement controls to the analog stick, effectively robbing you of any degree of proper aiming. Thankfully, there are three other control schemes, and you are openly invited to try out each scheme right at the beginning of the required tutorial level. We found the most usable one to be the scheme that might seem the most counterintuitive from the outset: the one that gave look controls to the analog stick and movement controls to the face buttons. It's basically a left-handed person's FPS scheme, and while righties might balk at it initially, they'll be able to adjust without too much duress. Also, the targeting reticle will magnetize itself to a nearby foe (provided they don't jump around too much), which seems to make up for any jitteriness that one might experience trying to get used to the aiming mechanics. It works to a degree, but it's more of a helpful guide than an automatic lock, so don't expect the game to just auto-lock to everything.

While the controls can certainly be worked with, regrettably, the game doesn't provide an awful lot of content for you to do anything with them. The scope of the game's design is so wantonly repetitive and exceedingly exposition-free, that it's hard to imagine anyone playing more than a handful of the levels before just becoming bored with the whole thing. Coded Arms' minimalist premise is sort of like a Matrix meets Tron meets Doom kind of thing. You're a hacker, you go into cyberspace, and kill many invading robot men and ugly insects (they're bugs, get it?). The single-player setup simply jacks you into one of the available worlds. While in each world's six levels, you'll blast away at anything that comes into your path as you move from room to room, looking for the "gatekeeper" (sadly, not of the vixenish, Sigourney Weaver variety), which is the enemy you have to kill to unlock the gate to get out of there. There are around 30 different weapons in the game, and each one packs varying levels of a satisfying punch. However, thanks to some lousy level design and mostly uninteresting enemies, you won't have a whole lot of fun with the shooting.

The one supposed hook the game has going for it is the fact that the level designs are all randomly generated...to a degree. The basic objectives for a given level are always the same, but you'll simply find obstacles moved around, corridors narrowed or elongated, and occasional gateways moved around a bit. The problem with this whole random generation thing is that only once in a great while does the game generate something enjoyable. The maps are always pretty cramped and small, so even when the game does randomly put together something slightly more interesting it doesn't make much of a difference, because you're still running through a cramped corridor or one flat, boxy room, killing the same enemies over and over again. What's more, the enemies are rarely even that challenging. The only real difficulty comes from when they come at you in larger swarms, and even then, they tend to drop enough health power-ups to where you're rarely in any severe danger. You'll probably have more trouble simply trying to aim right than you will with the enemy artificial intelligence itself.

The cramped maps plague the multiplayer component as well. You can pick from some previously set, ambiguously named maps from the beginning (or have a random selection), but none are all that great. It's doubly unfortunate, as the gameplay itself could have been enjoyable in a multiplayer setting. The three multiplayer modes--deathmatch, last man standing, and a sort of "kill the guy with the ball" kind of thing--all have great potential to be fun, but instead they're dragged down by the lousy maps. There are also a couple of goofy problems with the multiplayer, including some occasional bouts of lag (especially odd, since the game is ad hoc only) and weird weapon balancing. Essentially, you can opt to pick specific weapon sets at the outset of the game, which are fine (though a little on the dull side). However, if you just want to go in with your own weapons you've unlocked in single-player, you may be horribly outmatched if your friends have completed more of the game than you have. In essence, to play the multiplayer effectively, you pretty much have to beat the single-player game first--unless you just want to stick with the predetermined weapon sets.

From a pure, technological view, Coded Arms is visually quite impressive. This is one of the smoother-running games on the PSP, with a constant, steady frame rate and load times that rarely take more than 10 seconds, tops. Indeed, this is a technically impressive game; it's just not a visually entertaining one. The best part of the visual design is the menu setup, which does a really nice job of presenting the sort of uberfuturistic vibe the game is going for. Unfortunately, the in-game visual style is just sorely lacking. There are really only three environment types, and after a while, they all blend together into one generic mess. The set pieces are remarkably dull, the enemy designs are terribly uninspired, and the weapons just look like the kind of boilerplate near-future schlock you'd find in practically any other FPS. There are a few neat little visual touches here and there, like how fallen enemies and busted-up objects explode into little wafts of floating computer code--but that's about as much aesthetic praise as the game warrants. The audio isn't exactly impressive either, but it's OK for what it needs to be. Blaring techno loops throughout, though all it really does is loop, as there's no discernable hook to any of it beyond droning beats and synth. The guns sound good, but not great, and there's no voice work to be found anywhere. Then again, there aren't really any characters to be found anywhere, either, so maybe that's to be expected.

None of what brings down Coded Arms is inherent to it being a first-person shooter on a portable game system. The controls, while initially weird, can be adjusted to, and it's one of the better-looking games on the system from a technology standpoint. The problems are within the underlying design, which simply doesn't have a lot to offer beyond a bland, unappealing corridor crawl with similarly boring multiplayer. PSP owners may find a passable rental in Coded Arms, but that's about all. The first-person shooter genre may have a bright future on the PSP, but Coded Arms isn't it. 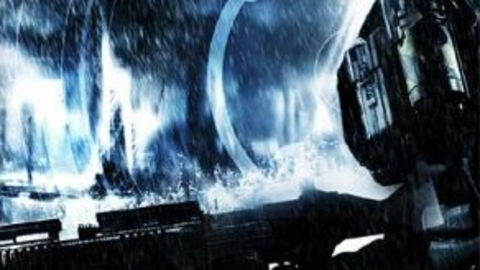