Someone explain, there were over 150 games released this year. What so bad about being 23?

There aren't 22 games released this year better than Halo 5.

This is the first time I've used the forum since the change. I rarely visit Gamespot anymore but I liked the way I could organize games and wishlists before, and I tried to sort through some things but it was too much of a hassle so I came here to complain. What's Gamespots obsession with drastically changing the layout every so often? I've found almost zero redeeming qualities with this new change, I just don't understand it. I tried to read the Dragon Age: Origins review but I just couldn't find the PC review for the original game. I always get taken to one of the DLC reviews. I've tried accessing it through the website, or even specifically searching for it through Google to no avail. That's the only game I've tried to search though, so it may be exclusive to DA:O or very widespread, I don't know.

Do user still have levels? Been here since 2005, but can't see the level anymore. Trivial, but I was curious. Can anyone else recommend an active and thorough gaming website that will let me organize lists of the games I own, plan to buy or am currently playing, with a strong following, good layout and active forums. Preferably not IGN. Somewhere to stay until the layout here is reverted or changed to something decent.

Relax people there is no game announcement in there

I miss the days when megatons in the gaming industry where game related.

I'm ~25% through GTA5 and it is fantastic so far. The Last of Us is still my GotY though.

In terms of actual story and themes? NIER.
In terms of story telling? The Last of Us.

Really got to get around to playing my copy of Chrono Trigger, seems a popular choice.

Games that really stood out for me:

Still have plenty to play. Didn't even include handheld games either.

If it stuck to the basics and was more akin to Halo 3 multiplayer (the first three games in general), I'd still be playing it. It tried to become a Halo flavoured CoD.

The score was fine. The fact that misogyny was brought up in a satirical game that was misanthropic if anything is what annoys me. I could agree with arguments made against Killer is Dead in a way. Not in a way that I think Suda 51 should change his ideas to suit such arguments, like arguments against any related medium such as books and films, but the arguments were valid. But it's becoming more apparent to me that this argument won't go away until every game features strong, independent women regardless of whether the men in the same games are depicted as dirt. I'd hope developers use some common sense and ignore most of it, but these people are very zealous and vocal.

As for the Feedbackula, it was the first time I've watched it. The host just picks the most ridiculous comments and flames them, overlooking the bigger issues brought up by other posters. I was hoping to hear some thought-out justification as to why Carolyn brought up none of the similar themes in her Saints Row 3 and 4 reviews, but instead saved such issues for the biggest release of the year. I mean, surely it wasn't because a GTA5 review would serve as a large platform to push a personal agenda?

No, what I think the issue here is, is that Carolyn has a personal agenda. With it becoming quite an "issue" now in mainstream gaming media, it's the latest trend to search for any form of misogony within video games. Had Gone Home been released two years ago, would it have recieved critical acclaim? Many will say it would have; I have my doubts. Grand Theft Auto 5 is a huge release. What better platform for a gaming journalist with an agenda to have their opinion heard? A bit of a claim you might think? Then what about Carolyn Petit's reviews on both Sainst Row 3 and 4, the series that featured the likeness of a pornstar who also voiced her character, as well as the "Penthouse Pack" downloadable content?

Carolyn's complaints? "Visually unimpressive - Ocassional Glitches" and "Combat grows dull despite your varied powers - Monotonous setting". Her gender has no bearing on whether her opinion is validated. She is a human being and her thoughts should be regarded. But are her points in regards to GTA5 valid, regardless of gender? That's for each individual to decide.

Few problems with that:

2. Other recent games have been panned by other reviewers for their outdated stances on women - Killer is Dead being the perfect example. The game was functionally solid, visually stunning, and quite a blast to play through, but was primarily critically panned for its terrible (and optional) Gigolo Missions. Again, not a major release, and once again reflective of the fact that reviewers in general (and not just Petit) are starting to take a stand against the less desirable elements of gaming culture.

Meanwhile, the game perfectly parodies Bioware's romances by allowing your character to blatanly ask anyone on the ship for sex - man, woman or machine. It's not crude - it's a hilarious indictment of relationships in videogames.

As for the lewd costumes,it dishes them out in equal treatment. Hell, one mission in SR4 forced my make character into a skimpy cowboy outfit and made him strip to lure out a villain. And that's not even mentioning SR3's gimp chariots (all men, btw). It's over-the-top, certainly, but it doesn't judge, and it doesn't objectify any one side more than the other (although SR4 does have a surprising amount of male nudity!).

1) I spoke of how this has become an "issue" in the industry recently, and that I have my doubts it would have scored so well everywhere had it been released a few years ago, not just by Carolyn. I think regardless of what side someone is on the debate, Gone Home was released at the perfect time, for better or worse. As for targeting big releases, I was implying that she was targeting a big release like GTA5 for criticism, and not bringing up misogyny in the criticism of plenty of other lesser known games which feature similar themes. Gone Home was perfect because it supported certain ideals, though I have my doubts much would be said about a little misogynistic indie game.

2) As I mentioned above, I acknowledged that this has become a thing in the industry, and not just a crusade by one journalist. I'd also say that Killer is Dead genuinely was misogynistic in a way. I don't believe that is the case for something like GTA5. It doesn't appear to make females look any "lesser" than some of the male characters.

3) I have to respectfully disagree here. 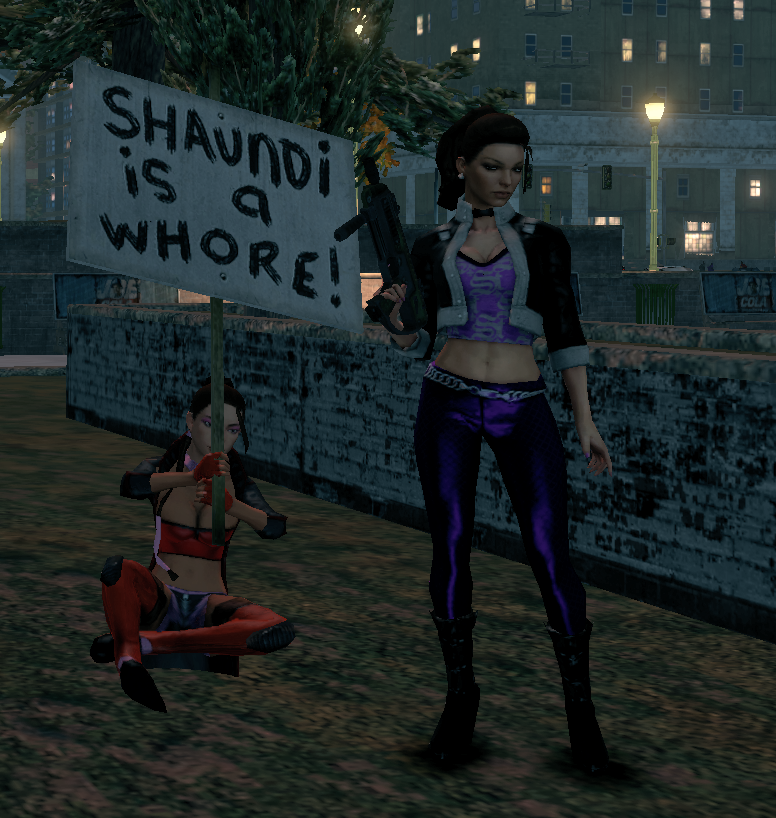 I'd also point out the "easter egg" involving Shauni as well. They're just some tidbits on her character alone. But as you said, both genders are equally treated in Saints Row. I've been saying exactly the same about GTA, yet it was criticised for being misogynistic. Sexual objectification doesn't solely define misogyny nor misandry though.

I'd also like to point out that the word misogyny is considered fine while misandry isn't accepted by Gamespots spellcheck. Just looking for a little equality here, GS. Come on now.