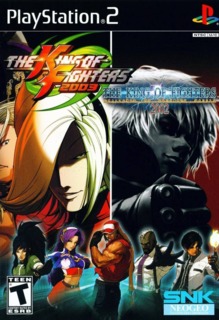 We give this Xbox Live-enabled compilation a spin and are extremely pleased with our findings.

Take a look at some intense fighting action in this match between Adel and Whip.

Vice fights her way to a decisive victory in this clip.

A moving flatbed truck probably isn't the safest spot to have a tag-team match in The King of Fighters 2003.

SNK Playmore confirms details on its upcoming King of Fighters dual pack for the Xbox.

SNK Playmore ships 2002 and 2003 versions of its 2D fighting franchise in one compilation; Xbox version to follow in June.

We test out this exciting compilation of two highly refined 2D fighters from the classic KOF series.

King of Fighters 2002/2003 will hit the PS2 in November, but Xbox owners will have to wait until sometime next year.

We take a look at this upcoming fighting game compilation from SNK Playmore.

The two latest 2D games to bear The King of Fighters name are coming to the PS2 in one package.

SNK NeoGeo USA announces the lineup of PS2, Xbox, and GBA titles that it plans to showcase at E3 next month.

The veteran publisher is releasing a duo of double-pack arcade ports over the coming year.