SNK Playmore ships 2002 and 2003 versions of its 2D fighting franchise in one compilation; Xbox version to follow in June.

King of Fighters 2002 features 44 characters from the KOF series, and KOF 2003 features 35 characters from the venerable series. Both editions feature the three-on-three team system featured in previous games in the series, but KOF 2003 eschews the round-by-round team action in favor of one long round of combat with on-the-fly substitutions.

The King of Fighters series has been bringing together characters from many of SNK's franchises of yore, including 2D classics Fatal Fury, Art of Fighting, and Samurai Shodown. The KOF series' games first held court on the NeoGeo system, and some editions found their ways in to arcades.

Xbox owners looking for a nostalgic knockabout need only wait until June 15, when King of Fighters 2002 & 2003 is released for Microsoft's console. 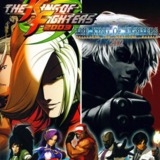