Where To Buy A Nintendo Switch In 2021: Switch OLED, Switch Lite, And Special Editions

Here's where you can buy a Nintendo Switch, Switch Lite, or Switch OLED, plus special-edition bundles like the Animal Crossing Switch.

Since the Nintendo Switch's release in 2017, Nintendo has expanded its line of consoles to include the handheld-only Switch Lite, various special editions, and the upcoming Nintendo Switch OLED. And with major releases like Metroid Dread and The Legend of Zelda: Breath of the Wild's sequel on the horizon, there's no better time to buy a Nintendo Switch if you've been holding off. Thankfully, it's now much easier to buy a Switch than it was in 2020, which saw stock shortages across the board on both the Switch and Switch Lite. As the busy 2021 holiday season draws closer, we might see certain Switch models and colors start to sell out again, so if you're considering buying a Nintendo Switch, you may not want to wait too long to do so.

It's rare to see deals on the Nintendo Switch outside of Black Friday, and even then, the best we usually get is some kind of bundle deal that gets you the Switch and a game or accessory for free. So you don't have to wonder if it's worth waiting around for a deal on the console; outright discounts on brand-new Switch consoles are still few and far between. If you're looking to buy a Nintendo Switch special edition, like the Animal Crossing or Mario Red & Blue versions, you can still do so at some retailers, but you may have to pay above list price for certain editions. Here's a look at where you can buy a Nintendo Switch in 2021, from the Switch OLED to the Switch Lite and more.

$350 | Available with White or Red/Blue Joy-Cons 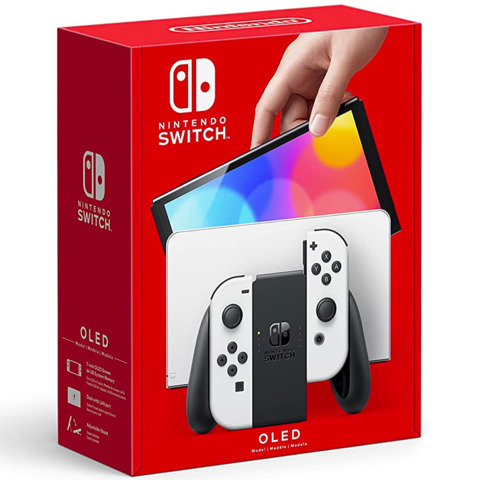 The Nintendo Switch OLED is the newest version of the Switch, releasing October 8, 2021. Switch OLED preorders are live now, though the $350 model is usually sold out at most stores, restocking sporadically. Two editions of the Switch OLED are available: a new white Joy-Con model that includes a white dock, and a red/blue Joy-Con model with a black dock that resembles the original Switch design.

The main difference between the Switch OLED and the standard Switch is that it sports a more vibrant OLED screen. The screen measures 7 inches, slightly larger than the original's 6.2-inch LCD screen. The Switch OLED also features enhanced sound, a wider, adjustable kickstand, an updated dock with a wired LAN port, and 64GB of internal storage (compared to the original's 32GB of onboard storage). Other than that, the Switch OLED is not much different from the standard Switch; it won't deliver any difference in performance, and it's not capable of 4K output. It also uses the same Joy-Cons as the regular Switch.

$300 | Available with Gray or Red/Blue Joy-Cons 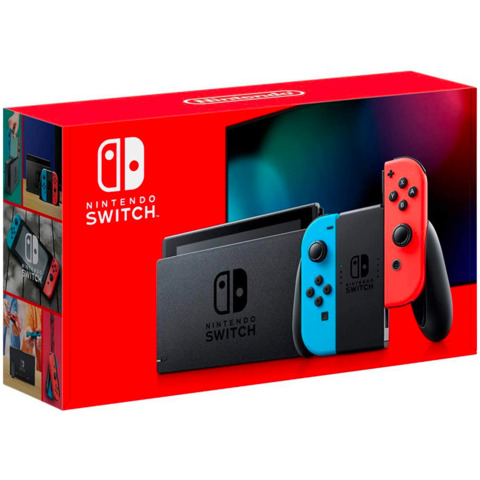 The standard Nintendo Switch sells for $300, and after being extremely hard to find in stock throughout the majority of the pandemic, stock seems to have mostly stabilized for now, especially now that the Switch OLED is a new option. Available with gray or red and blue Joy-Cons, with a variety of other Joy-Con colors available to buy separately, the Nintendo Switch allows for three main play styles: TV mode, handheld mode, and tabletop mode. Its battery life is between 4.5 and 9 hours depending on the game, and to play it on the TV, you can detach the Joy-Cons and use them separately or with an included grip that turns them into something similar to a traditional controller. However, the Switch Pro Controller is a worthwhile pickup if you're planning to buy a Switch, offering a much better controller experience. (Check out our guide to the best Switch controllers for more options.)

See at Amazon
See at GameStop
See bundles at Adorama 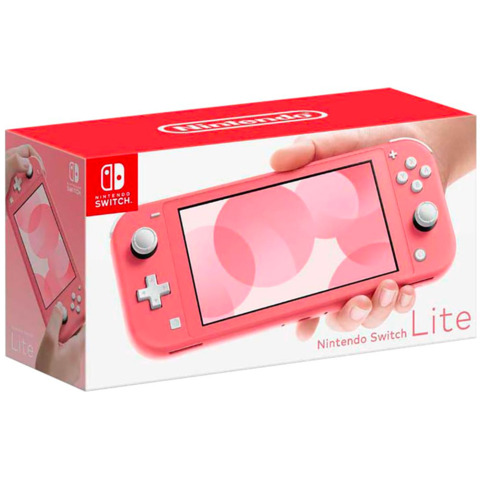 The Nintendo Switch Lite is a budget-friendly option for players who plan to play the Switch entirely in handheld mode. You can't dock the Switch Lite to play it on the TV, and it doesn't have removable Joy-Cons--if you want to play it in tabletop mode, you'll have to buy Joy-Cons separately. You'll probably want a good playstand too as the built-in kickstand is filmsy (we recommend this one from Hori). But as a dedicated handheld device and for those who like to play while they travel, the Switch Lite is an excellent option. It's slightly lighter at just under 10 ounces and has a slightly smaller screen. In terms of power, it's identical to the standard Switch in handheld mode, and it can run the vast majority of Switch games just fine, aside from a few exceptions that aren't ideal for it (like Ring Fit Adventure). The Switch Lite is pretty widely available to buy at major retailers, though some colors (like Coral) are more prone to selling out than others.

See at Amazon
See at GameStop
See at Adorama 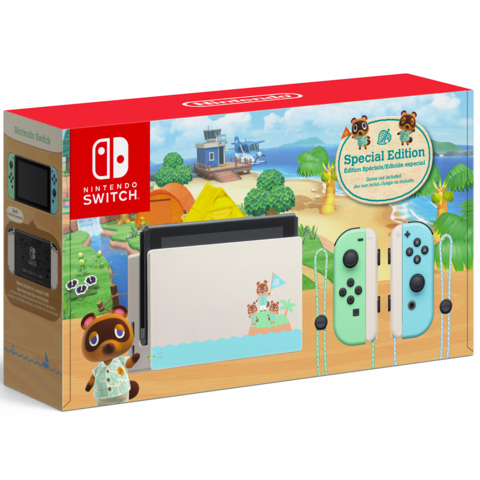 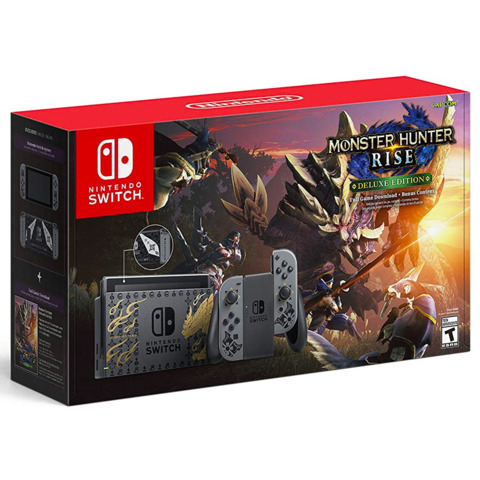 The Monster Hunter Rise-edition Nintendo Switch is the most recent special edition, released March 26, 2021, alongside the game. It includes a digital copy of Monster Hunter Rise: Deluxe Edition, hence the $370 price tag. The dock and Joy-Cons sport a Monster Hunter-themed design, including the game's flagship monster, Magnamalo, and a matching Pro Controller was released as well. The Monster Hunter-edition Switch is very hard to find in stock, but some stores still have it available above list price.

See at Amazon
See at eBay 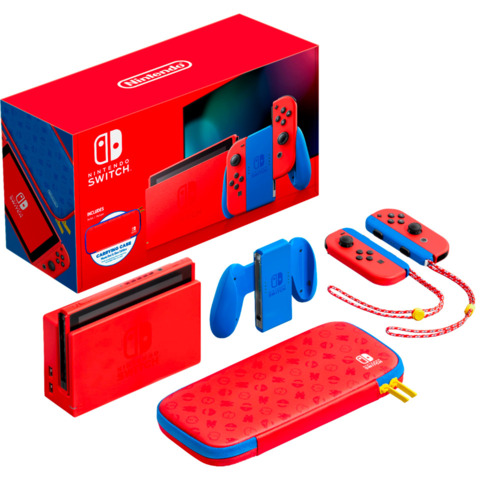 The Mario Red & Blue Edition Switch was released alongside Super Mario 3D World + Bowser's Fury on February 12, 2021. It's the only Nintendo Switch model so far where the console itself is a different color than gray (not just the Joy-Cons), and it features Mario's signature red and blue color scheme. The bundle also includes a carrying case and screen protector for the Switch, making it a particularly good deal. Unfortunately, this one's hard to find in stock at list price now, but if you're willing to pay a premium, you can still find it at some stores. 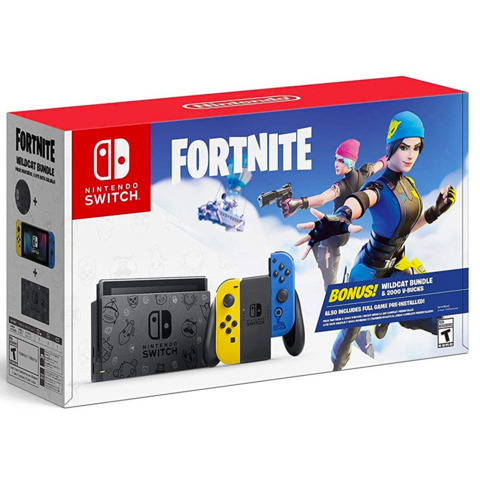 Like the other special-edition Switch consoles, the Fortnite model has a design that stands out. The bundle comes with a unique Joy-Con color scheme as well as a Fortnite-inspired pattern on both the back of the console and the dock. The console comes with Fortnite pre-installed, 2,000 V-Bucks, and a download code for The Wildcat Bundle (an in-game pack with cosmetic items). It's pretty hard to find the Fortnite bundle at retailers now, but it's not impossible to find if you're willing to pay above list price. Keep in mind you can buy the blue and yellow Fortnite Joy-Cons separately in the Fleet Force Bundle ($80).

See at Amazon
See at Walmart
See at eBay