A good Nintendo Switch case is key to protecting your Switch or Switch Lite from damage.

As a hybrid console and handheld device, the Nintendo Switch needs a bit more protection than other consoles that stay in one spot for years. Unless you leave the console in the dock forever and only play with a Switch controller, you're going to want a solid Nintendo Switch case. In fact, it's probably the first accessory you should buy alongside the console. Nintendo Switch carrying cases protect your console from damage--a simple screen protector won't help with every kind of accident. We've put together a list of the best Nintendo Switch and Switch Lite cases, and many of them are regularly discounted at Amazon. Many of these cases will also be compatible with the upcoming Nintendo Switch OLED.

The Switch OLED is only slightly larger than the Nintendo Switch, so most existing Switch cases will work just fine. However, form-fitting cases and grips will likely have compatibility issues. At this time, there aren't a ton of OLED cases, but there is an official case from Nintendo that costs $20.

For Switch and Switch OLED 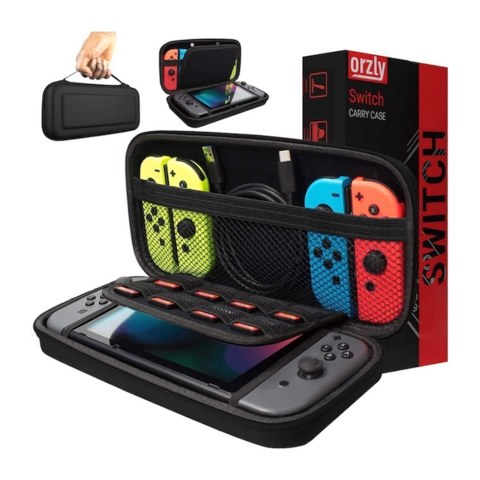 Orzly's hard-shell Nintendo Switch carrying case comes with a substantial mesh pouch that is big enough to store two pairs of additional Joy-Con and a charging cable (and maybe even an HDMI cable, if you're feeling fancy). It also has an eight-card insert to store games. 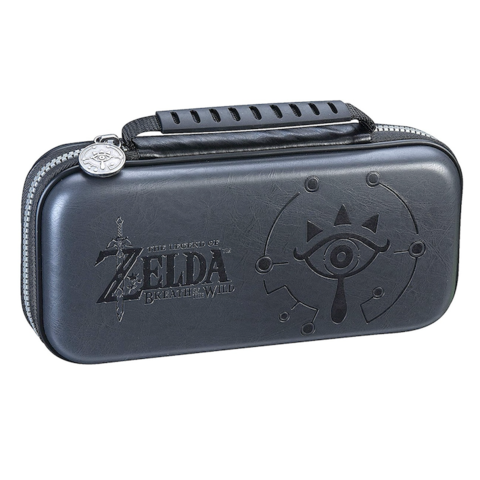 Officially licensed by Nintendo, the RDS Industries Nintendo Switch travel case is a great accessory. With recesses designed specifically to house the Switch with Joy-Con, you don't have to worry about your console moving around. The hard shell design protects the Switch from drops, and it also comes with a zippered mesh pocket to store small accessories, a pair of plastic cases with four slots that can hold one game cartridge each, and two microSD card cases. This Nintendo Switch case is available in plain black, Zelda-themed, and Mario Kart-themed. 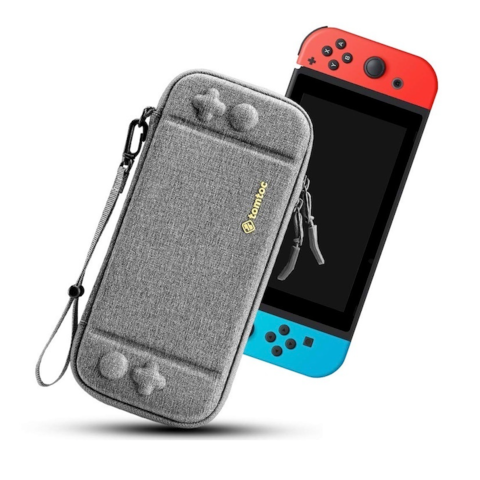 A slim-fitting case that mimics the look of the system itself, this Tomtoc Nintendo Switch hard case is ideal for those looking for something that won't take up much room in their backpack and can act as a screen protector while the console is in storage. Despite being so small, it still has an insert with 10 slots to fit a game cartridge into. It's available in gray, black, pink, camouflage, and red. 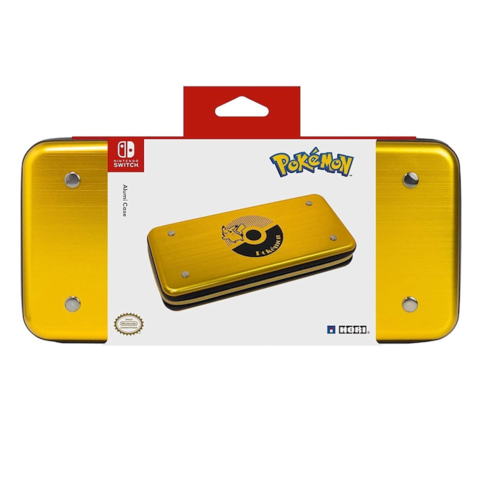 Hori's officially licensed Alumi Nintendo Switch hard case has a slick metal exterior that protects your console from drops. It's minimalistic on the inside, with just a five-card insert to store games, so it's definitely more of a protective case. The real draw of Hori's Nintendo Switch case is the Nintendo-themed designs featuring Zelda, Mario, or Pikachu, each of which really pops. 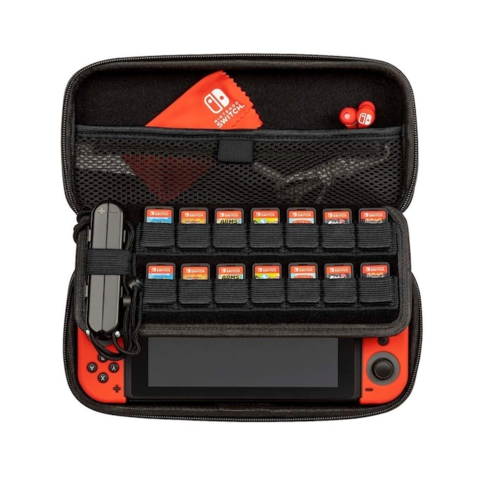 PDP's Deluxe Travel Case comes in three styles: gray, Pikachu, and Poke Ball. It's ideal for those with larger libraries of games, as it holds a whopping 14 game cartridges. The hard-shell Nintendo Switch case also has a mesh pouch to store earbuds, cleaning cloths, and small cables as well as a strap to lock Joy-Con sliders into place. PDP's travel case is also officially licensed by both Nintendo and The Pokemon Company. 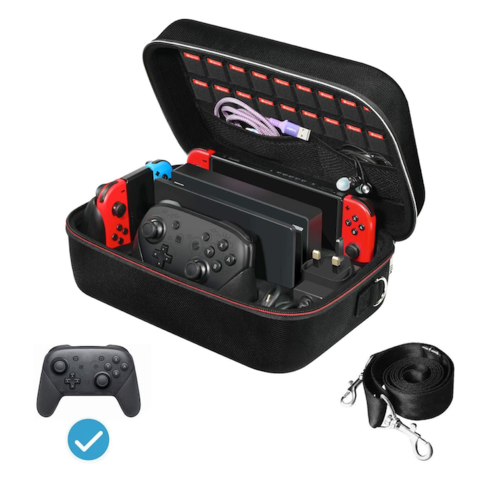 For ultimate safety when traveling with your full Switch setup, iVoler's Carrying Storage Case is a great pick. It has dedicated slots for the console, dock, cables, Joy-Cons with grip attached, and the Pro controller. It also has an insert that holds 18 game cartridges. 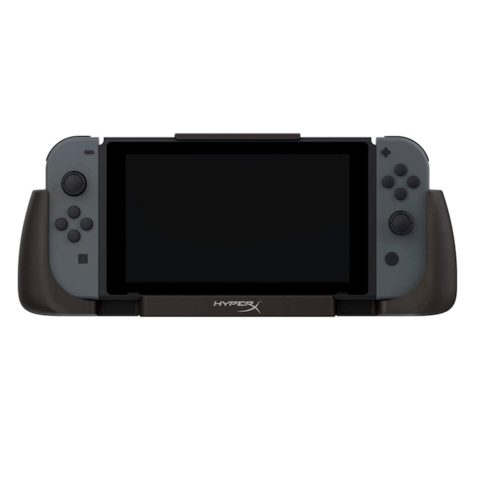 HyperX's ChargePlay Clutch doubles as a portable charging dock to give your Switch extra juice during your commutes. The grip case has a 6,000mAh extended battery that adds up to five hours of playtime. The ChargePlay bulks up the Switch to make it more comfortable to hold for extended sessions. Alternatively, you can separate the console stand from the Joy-Con stand to play in tabletop mode or simply charge your devices. The ChargePlay is one of the best Nintendo Switch grips you can buy. 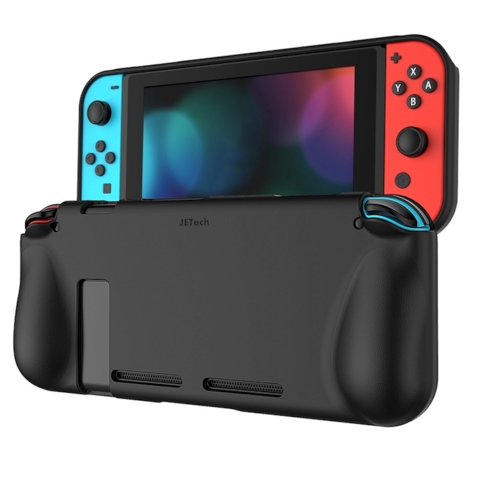 If you find playing the Switch in handheld mode uncomfortable, grip cases can work wonders. JETech's Nintendo Switch grip case is budget-friendly while adding nice back grips that make playing for extended periods of time less stressful on your hands. It also lets you grip the console in a more natural way, especially if you have big hands. This Nintendo Switch case comes in four colors: black, green, blue, and plum. 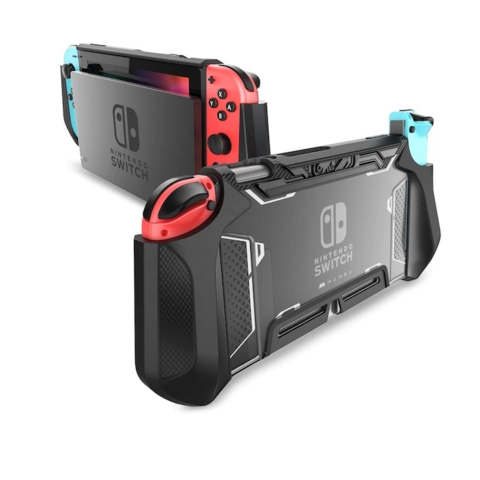 Mumba's Nintendo Switch grip case has the added benefit of being dockable, so you don't have to remove it when playing in console mode. The clear back panel design lets you still see the Switch logo, while the grip itself is wonderfully ergonomic. Also, the case is scratch and shock-resistant. 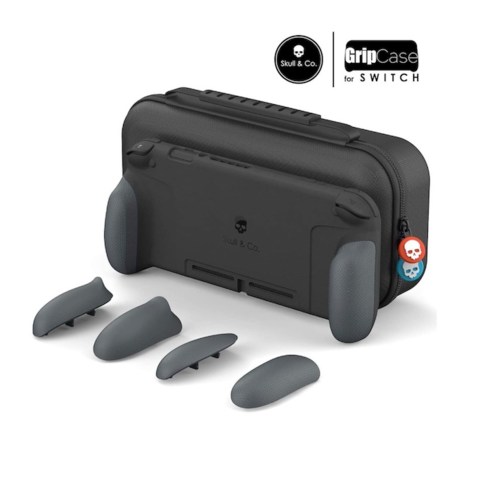 Skull & Co.'s Nintendo Switch grip is easily one of the best around, as it comes with three interchangeable handles to help make it comfortable no matter who is playing. It also increases the size of the ZL/ZR triggers, which is great considering the default Joy-Con triggers are a tad small. This particular set also includes a Nintendo Switch case with 10 game card slots and a mesh pocket, but you need to remove the console from the grip to use it. While the Switch is technically dockable with the grip attached, it's a really tight fit.

See at Skull and Co. 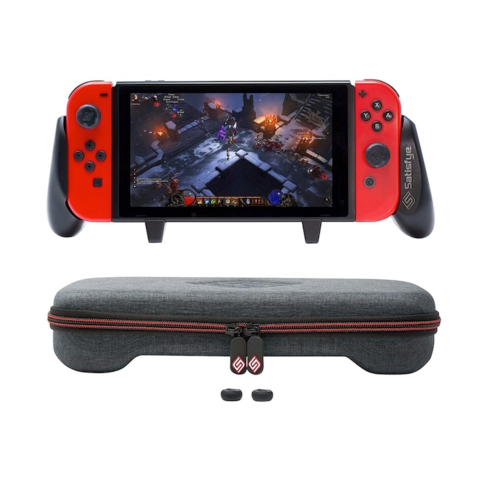 Satisfye's Switch grip is one of our favorites, and this bundle is a worthwhile investment. It comes with the stellar ergonomic grip and a Nintendo Switch carrying case specifically designed to carry the Switch while it's in the grip. The hard-shell case can also hold 10 games. 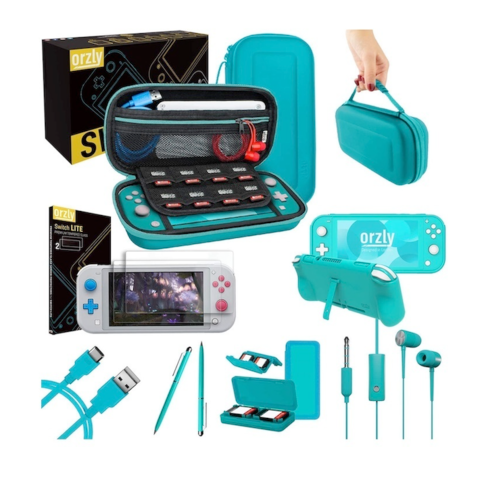 Basically a starter kit for your Switch Lite, Orzly's accessory bundle is an incredible value. It comes with a Nintendo Switch Lite case that holds eight games and plenty of accessories, a grip for playing in handheld mode, and much more. You get two tempered glass screen protectors, a stylus (great for Super Mario Maker 2), a game cartridge case, earbuds, USB-C charging cable, and six thumb grips. If you recently bought a Switch Lite, this bundle is arguably the best you can get for your money. It comes in several colors, including blue, gray, pink, red, yellow, and black. 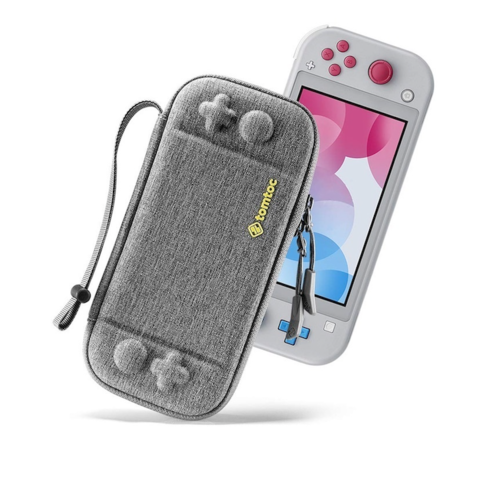 Best for those looking for a sleek Nintendo Switch Lite case, Tomtoc's hard shell carry case offers military-grade protection without the bulk. That said, it still has an insert to hold up to eight game cartridges. It's available in more than a dozen colors. 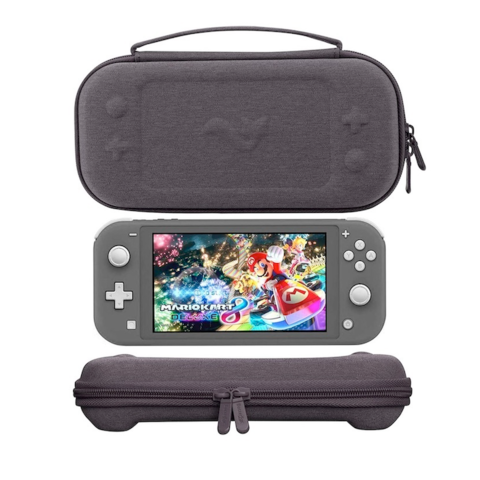 ButterFox's Slim Compact Case is ergonomically designed to store the Switch and keep it in place without taking up much room at all. It's also loaded with a surprising amount of storage space, as it's capable of holding 19 games, two microSD cards, and small accessories in the zippered mesh pocket. The case also comes in a bunch of different colors, including gray, yellow, pink, and turquoise to match the four Switch Lite models. 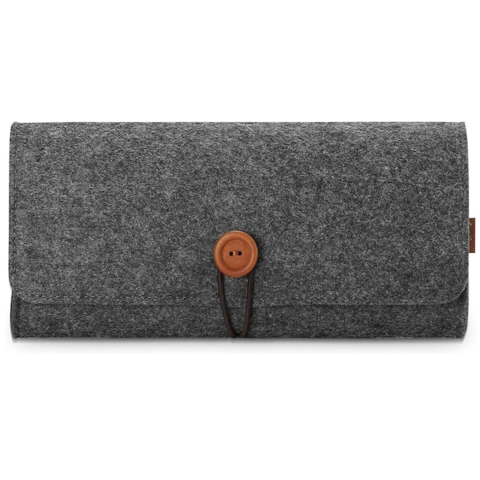 ProCase's carrying pouch resembles a wallet, which makes it quite a bit different than most of the cases on this list. While it won't provide as much protection against drops, it does have an appealing look. The carrying pouch has five game card slots, too. It's available in black and yellow. 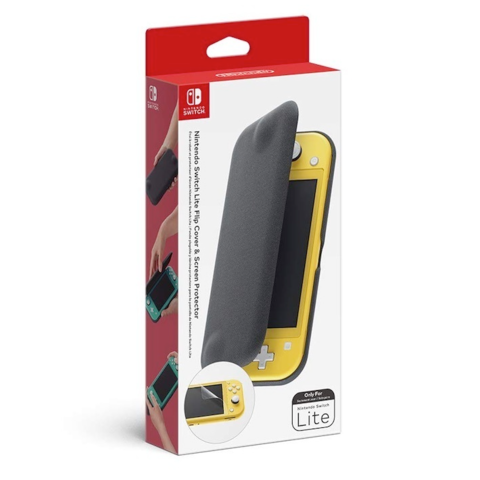 Nintendo's Flip Cover keeps both the front and back of the Switch safe much like Apple's Smart covers for iPads. Simply flip it over to play without detaching the case. The convenient design keeps the screen free of dust when not in use. 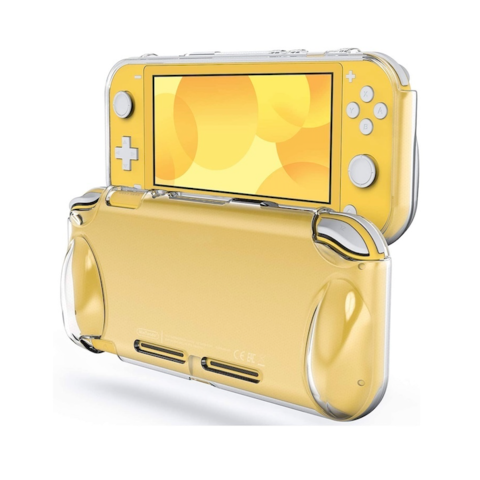 JETech also makes a great grip case for the Switch Lite. Crucially, it comes in clear, so you can still see the snazzy yellow, turquoise, coral, or gray finish on your console while using it. But if you'd prefer a splash of color, you can get it in black, gray, turquoise, coral, and other finishes. 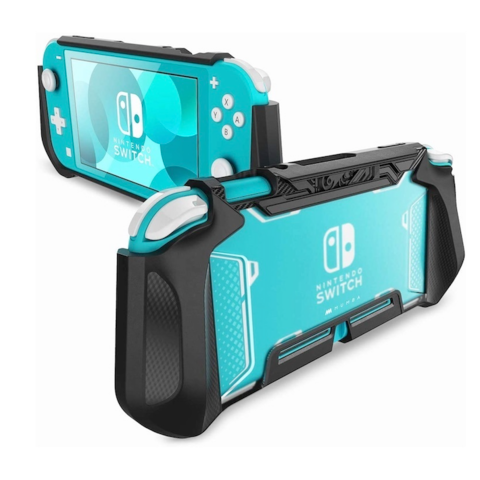 Almost identical in design to Mumba's Switch grip, this Switch Lite grip case bolsters the ergonomics of your Switch Lite while retaining access to all of the essential ports and keeping the majority of the finish exposed but safe from scratches. The Mumba Switch Lite Grip comes in a variety of colors, including clear, black, and coral. 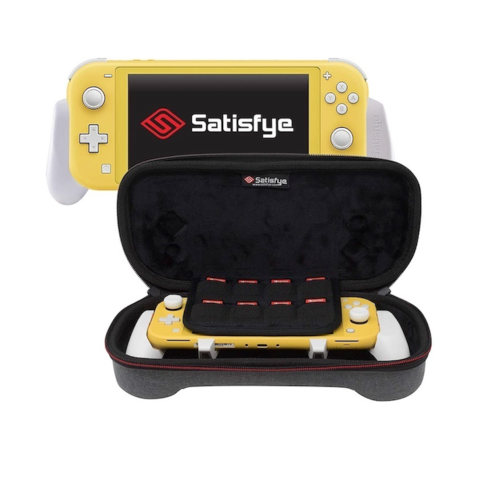 Satisfye's Switch Lite grip mirrors the excellent design of the regular Switch grip, which makes it a no-brainer if you're looking to add some extra comfort to your Switch Lite. Its ergonomic design really does make a huge difference, especially for those with larger hands. This bundle comes with a hard-shell case that is large enough to fit the Switch Lite while attached to the grip. Alternatively, you can buy the grip by itself. 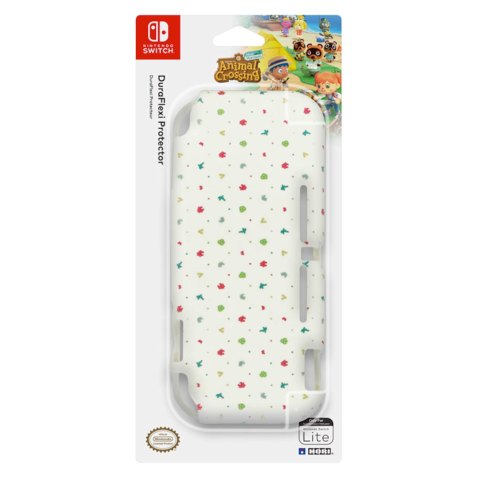 Hori's DuraFlexi Protector covers the entire Switch Lite with plastic to keep the console safe from scratches and dings. It easily snaps on and off, making it an ideal choice for those who may not want a case on at all times. It comes in clear as well as Animal Crossing and Pokemon designs.