Hang the Fortnite Battle Bus, an NES controller, and Baby Yoda on your Christmas tree this year.

A traditional Christmas tree is usually decorated with angels, spherical baubles, and other festive icons, but if you're looking to add some pop culture life to your corner of the living room, now's a great time to start stocking up. Video game companies have gotten into the festive swing of merchandising lately, and you can easily deck the halls with Fortnite, NES, and Minecraft decorations that'll allow you to celebrate the season and your favorite video games. We've got plenty of options listed below that you can have a look at, to create the funkiest Christmas tree on your block.

And while you're here, check out some of our picks for the best Nintendo gifts, PlayStation gifts, Xbox gifts, and PC gaming gifts. We've also rounded up the best stocking stuffer ideas for 2021, Funko Pop gifts, tech under $50, and more, so you're sure to find something for everyone on your list who's into gaming, tech, or pop culture. 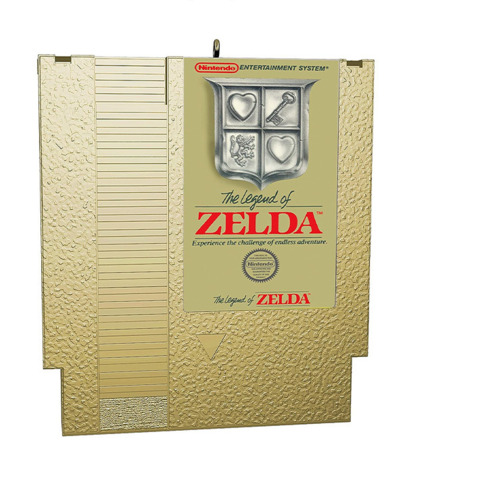 This 2021 ornament from Hallmark is one of our favorites, and it's proving popular with others as well, as it's been going in and out of stock on Amazon. It features the shiny gold Legend of Zelda NES cartridge, making it the perfect gift for old-school Nintendo and Zelda fans. 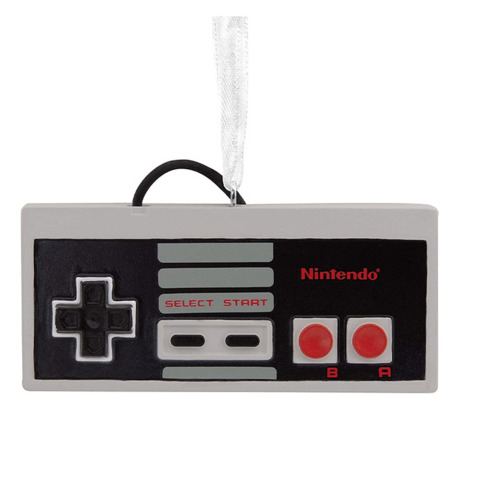 Hallmark's 2021 ornament line includes another nod to the NES, which celebrated its 35th anniversary this year, with this ornament that resembles the system's original controller. 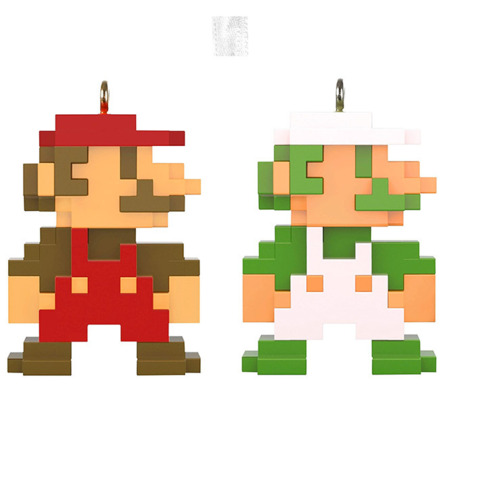 Alongside the NES, the Super Mario franchise also celebrated its 35th anniversary recently, so it's fitting to see these two 8-bit Mario and Luigi ornaments release just in time for the holidays. Available for $9 each, these tiny ornaments showcase the iconic sibling duo in their classic pixel-art styling. 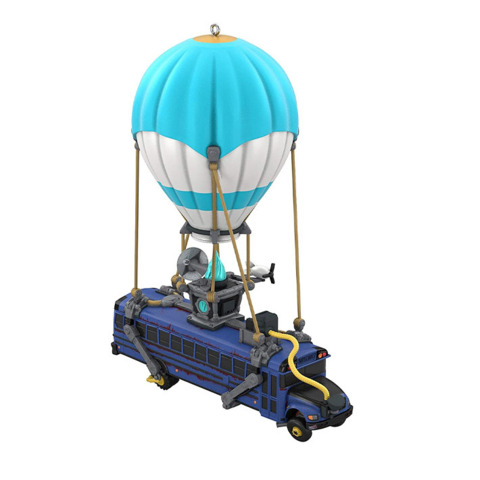 Fortnite is still one of the biggest games in the world, especially among young gamers, and this impressively detailed ornament features one of the game's most recognizable elements: the Battle Bus. 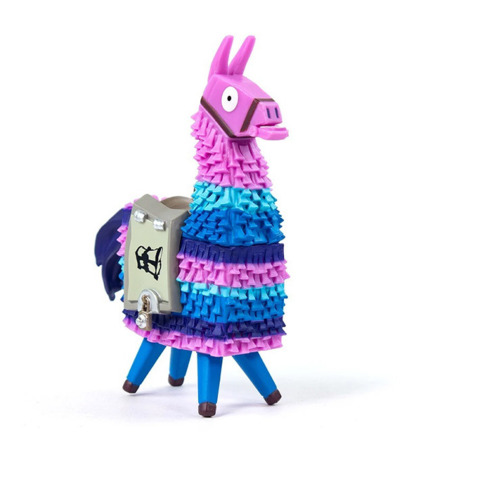 Fortnite's colorful Loot Llama makes a great Christmas ornament and keepsake for fans of the battle royale game. Geek Store has several other Fortnite ornaments available as well, and the store has a two for $20 offer to help you save on multiple. 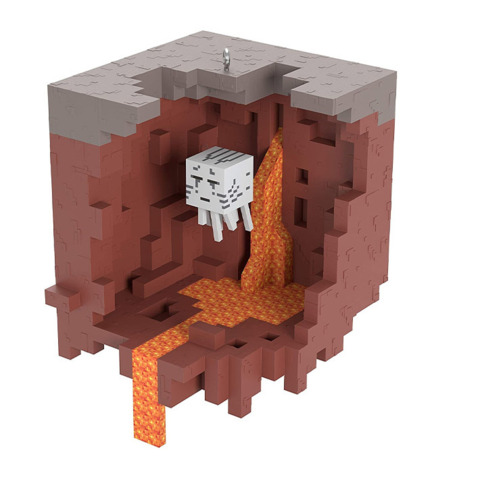 If you're shopping for a Minecraft fan this holiday season, this new ornament from Hallmark makes a cool and unique gift. It shows a slice of the game's menacing alternate dimension, the Nether, including one of its creatures, a floating Ghast. 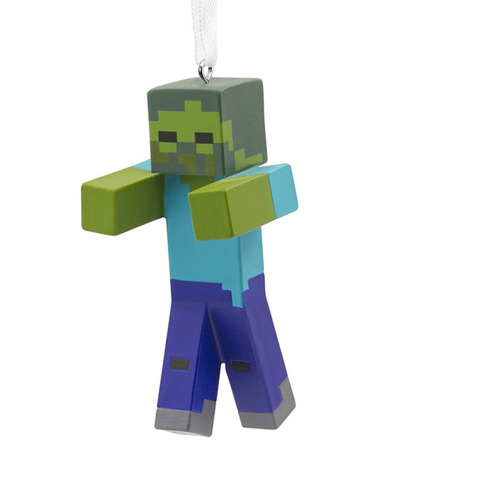 We're not through with Minecraft just yet. This resin Christmas ornament features one of the Overworld's iconic pixelated foes, the Zombie. 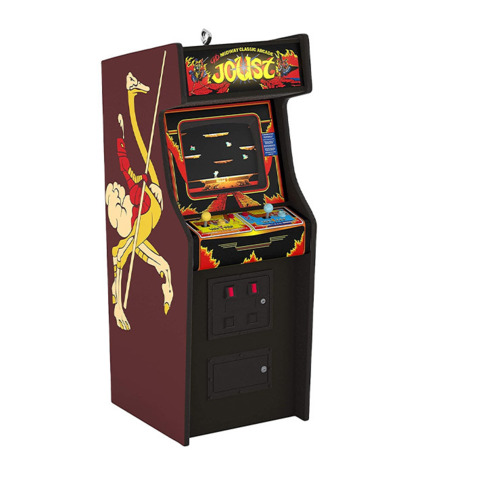 This retro ornament pays homage to the 1982 co-op arcade game Joust. Not only does this ornament feature a remarkable level of detailed design; it also lights up and plays classic sounds from the game. 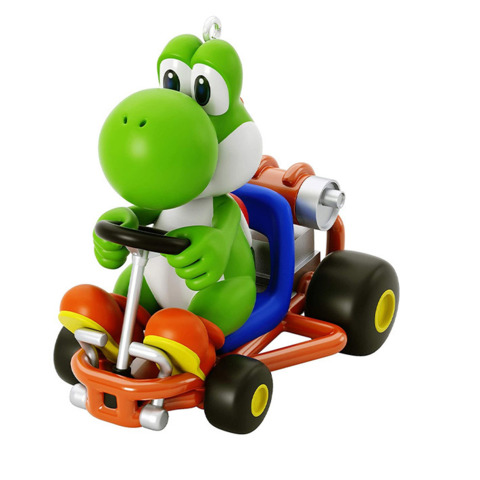 The last time we saw a new game starring the Super Mario franchise's beloved dinosaur Yoshi was in 2019 with the release of Yoshi's Crafted World--but that doesn't mean he doesn't deserve a spot on your tree. This ornament features Yoshi as he appeared in the 2001 Game Boy Advance game Mario Kart: Super Circuit. 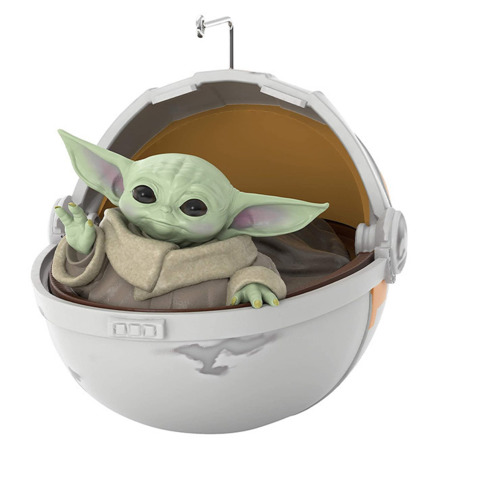 There are a lot of Baby Yoda ornaments out there this holiday season, but this is the cutest one--and as a result, it keeps selling out. Assuming you can nab it in stock at Amazon or elsewhere, this keepsake ornament featuring The Mandalorian's best baby would add a hefty dose of cuteness to any Christmas tree. 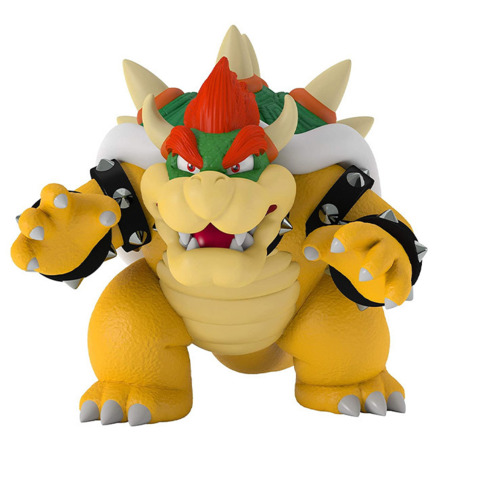 Mario's ultimate foe and the king of the Koopas, Bowser, looks particularly ferocious in this Christmas ornament from Hallmark. 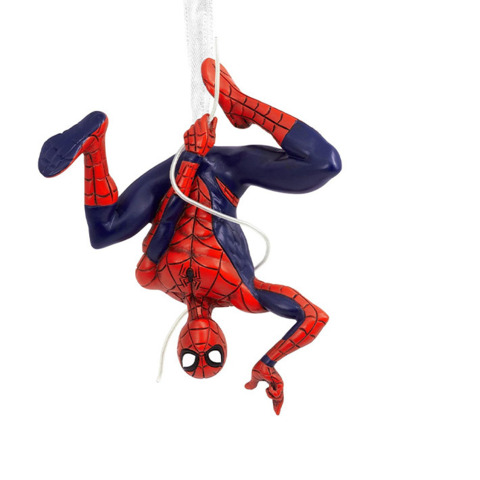 Spider-Man: Miles Morales, the next game in PlayStation's web-slinging hero series, releases this holiday season, and though there aren't any ornaments for Miles just yet, Spidey fans will still appreciate this ornament featuring Peter Parker's Spider-Man. This neat Christmas ornament has the hero posing from an upside-down position as he hangs from his web, waving hello. 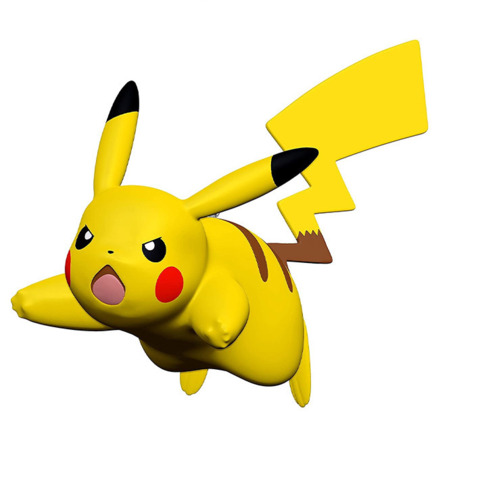 Eight full generations of Pokemon have been released in the nearly 25 years since the series' Japanese debut, but there's no question Pikachu is still one of the most recognizable and popular characters from the franchise. This ornament shows Pikachu looking particularly fierce, as though he's dashing to perform Thunderbolt on an opponent during battle. 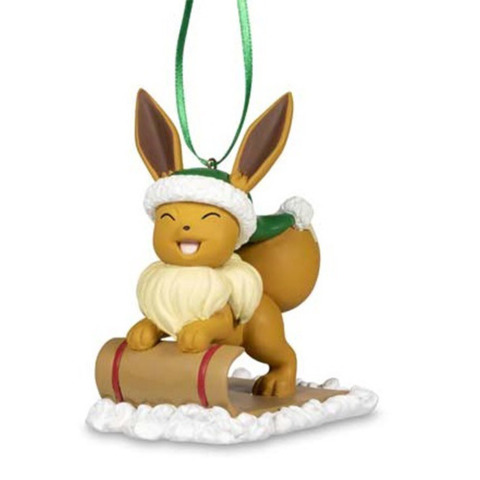 Over on the official Pokemon Center website, you can buy this newly released and absolutely adorable Eevee Christmas ornament, which shows the Normal-type Pokemon gleefully riding a sleigh. 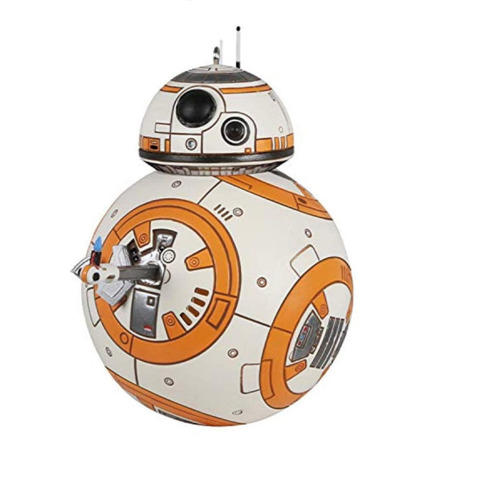 There's no shortage of Star Wars ornaments out there, but this new BB-8 ornament has to be one of the cutest. This highly detailed model shows BB-8 giving you a little thumbs-up, and it even plays some of the droid's memorable sounds from Star Wars: The Force Awakens. 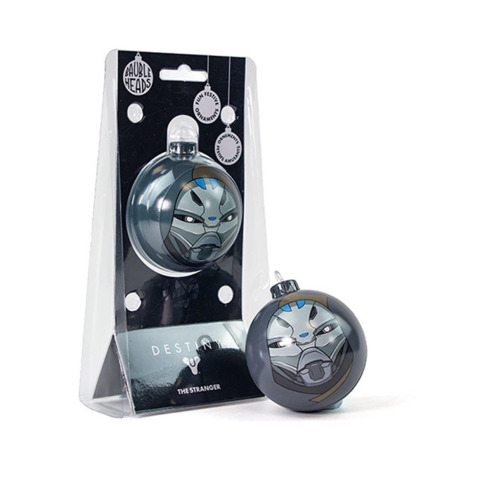 Destiny 2's next major expansion, Beyond Light, releases November 10, and according to developer Bungie, it marks the beginning of a new era for the first-person shooter franchise. For Destiny fans, this Christmas ornament featuring the Exo Stranger would make a great addition to the tree. Geek Store also has a nice promotion on bauble ornaments--they're $5 if you buy anything else on site. 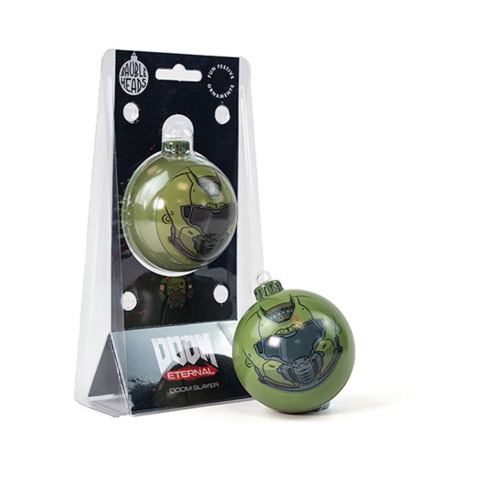 Doom Eternal released earlier this year, and you can treat fans of the action-heavy shooter franchise to this little ornament designed to look like the Doom Slayer's head. He can take a break from mowing down the forces of hell to sit on your Christmas tree and look cute (but still deadly). 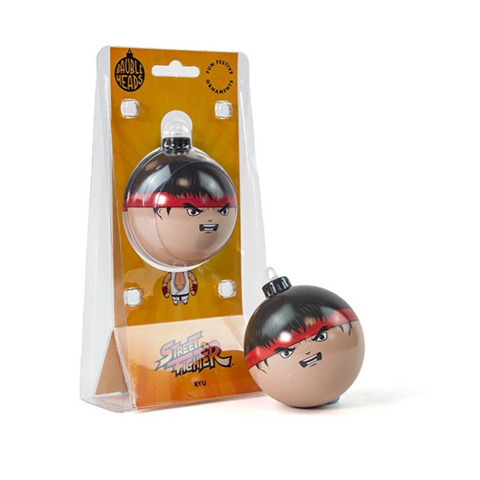 It's hard not to laugh looking at this spherical representation of Ryu from Street Fighter, and you're sure to get a smile out of any fighting game fans when they unwrap this ornament. 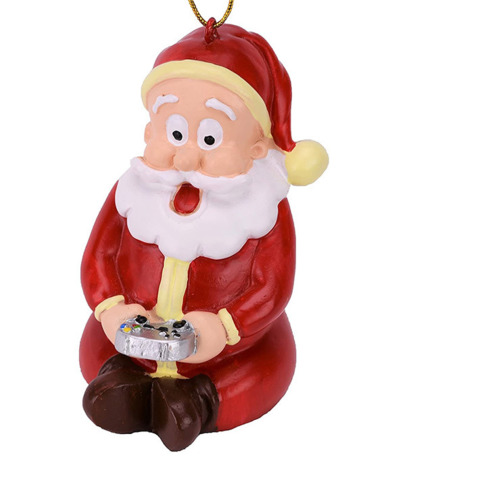 We're a bit obsessed with this Gamer Santa ornament we found on Amazon. It's something about the inscrutable look on his face (is it joy? fear? shock?), the ambiguous controller, his wholly uncomfortable sitting position... we can't put our finger on it, but we love Gamer Santa all the same. And if you're not sure what kind of games your giftee is into--whether they play Destiny, Minecraft, Fortnite, or something else--they're sure to love Gamer Santa too.