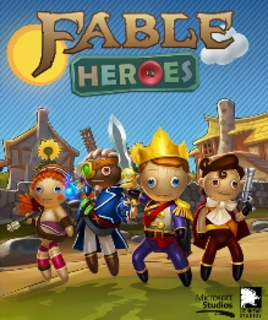 User Rating: 7 | Fable Heroes X360
By JamieHubble | Review Date: May 5, 2012
This game could easily be passed off as another game as it doesn't link to the story of Fable at all.
It's more of a pick up and have fun title and it does just that.

If there was a game to explain how it plays, I would be Castle Crashers as closest as it's a 4 player experience, slashing and crushing everything in your path.

You play as a Puppet Hero, this could be the King, Hammer, Garth or Reaver to begin with, eventually you can purchase the likes of Lucien, Scythe and others. You play through colourful worlds on a set path until you get to the end where you can pick a path to a Boss battle or a mini game, so the replay value is there just to make you unlock both on the game map.

Once a level is over, it counts you gold earned and puts it into your characters bank and decides how many dice you have earned throughout your play, once there you are sent to a board game, role the dice and land on a section, simple, on the section you can choose to upgrade yourself with your gold based on the section you landed on.
This could be anything from Attack strength to Walking speed, cool weapon effects or just a multiplier in Gold.

The AI are not too bad, they know what they have to do and they don't hesitate to do so, they will wreak havoc on everything in sight not thinking of the consequences, even if it kills them.

The issue I have with the AI is that if you are going through missions to pick up as much gold for them as possible to rank them up, they will stand there aimlessly as if to say "well you're human, pick it up then". They will eventually pick up the gold but most of the time they will wait until the last seconds before it disappears therefore gaining little for themselves.

As for combat, it's a very simple button masher, X to strike, Y to flourish (heavy attack) B to dodge, RT to sacrifice 1 heart for a large scale slam to the ground.
It's fast paced combat and most of the time you'll be given the option to open a chest mid battle, this could benefit you with super speed and turn you into a powerful giant, Or, it could punish you for being greedy and turn you into a tiny hero, sometimes it turns out to be Chestys son ready to nom you into little puppet fluff.

Music is classic Fable style which matches the corresponding areas very well and just gives it that bit of extra oomph to keep you entertained.

I'm actually playing this as I type which I usually don't do, but 'Hooked' is the word for me at the moment, I'm enjoying this game single player and multi player.

It's an easy 7 from me, no higher due to not enough in the game and inaccessible areas and Characters to use until Fable: The Journey is here.