Phil Spencer says, "I don't think I've ever worn a t-shirt that's been a complete head-fake."

Top Xbox boss Phil Spencer took to the stage today during Microsoft's Windows 10 event wearing a Battletoads t-shirt. He never mentioned the Battletoads series during his section of the presentation today, so we caught up with him following the event to ask if him wearing the shirt meant anything.

Asked if the Battletoads t-shirt was a tease for a new entry in the long-dormant series, Spencer replied: "I don't think I've ever worn a t-shirt that's been a complete head-fake. I wouldn't do that."

While it's not a confirmation that Microsoft is indeed working on a new Battletoads game, it does add to the growing speculation that indeed the company is.

In November 2014, Microsoft renewed its trademark for Battletoads, though at the time, the company wouldn't say anything about the future of the series.

Windows 10 Briefing: All the News 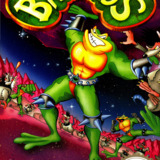