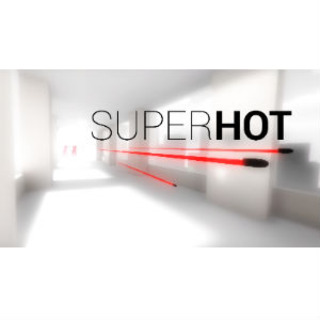 A Stylized Shooter with a Clever Time Mechanic.

Time moves when you do; its this simple concept that fuels SUPERHOT. SUPERHOT is a minimalist first-person shooter that lets you fight off enemies at your own pace. All you need to do is stand still and watch as bullets slowly fly past your head. Originally released as a flash game the concept has been flesh-out into a four to five hour story with an selection of extras to fill the full package. I'll admit it was the gameplay that and visual style that originally drew me into this game yet I was pleasantly surprised to also find a unique narrative driving the experience. There is a fair bit more to SUPERHOT than I imagined and I'll share with you what I've found.

SUPERHOT is divided up into a handful of chapters each containing a series of short scenarios. Each of these scenarios is featured in a different locations from train-yards, to alley ways, and office buildings. All you have to do in level is eliminate all the enemies. They clearly stick out as bright red against the all white backgrounds. You are as outnumbered and outgunned so it is vital to take your time and prioritize who to take out first. There is no reloading in this game, instead when you run out of ammo you simple hurl your weapon at the enemies. Afterwards you'll need to pick up another projectile or gun, usually from disarming an enemy.

There are a series of weapon and projectiles at your disposal. The most common weapon is the pistol which can be fired just a handful of times before running out of ammo. Then you have the shotgun which has a very impressive spread but has even less ammo than the pistol. The final gun is the rifle which is full automatic and has a decent amount of ammo. Another fun weapon is the katana which is not only good for cutting down enemies but it can actually spice up bullets in mid flight! You'll find a couple other projectiles you can hurl at your enemies including phones and hammers.

The story begins with a friend messaging you about a cool new game he is playing. They send you a download and right away you're hooked. You get message back to them about and discuss how fun it is while they send you more levels to play. However things quickly start to get weird and other people start to hack into your game. They start harassing you in game and for some reason they even know where you live. Things continue to spiral out of your control all the way up to a powerful conclusion.

I would describe SUPERHOT as short and sweet. I throws you right in with the simple time mechanic and puts you in increasing challenging scenarios till it spits you out with its warped story-line. The length doesn't bother me because I enjoy being able to play unique games like this but its worth considering if you are on a more constrained budget. I loved the simplistic visuals and it was quite enjoyable to watch replays at the end of each level played back at full speed. I was also very impressed by the story although I wonder what I may have been a little less linear and gave the player more choices. Now you however do have a choice; to play SUPERHOT or to not play SUPERHOT.