Superhot's defining characteristic is immediately intriguing; time only moves forward when you act. Conversely, when you stop moving, everything around you does too: enemies freeze mid-stride and bullets hang in the air. Under these conditions, you methodically weave and shoot your way through a series of increasingly intricate levels, which at first, don't seem connected in a meaningful way. However, Superhot ultimately reveals its true self: a game designed to gradually mess with your expectations of its narrative.

Superhot bears the look of your typical first-person shooter, but while your goal in each level is to kill every enemy therein, the time-based trickery involved makes it more like a puzzle game than an FPS. Planning and execution are valued over reflexes and sharp-shooting skills. You're also incredibly vulnerable: one punch or bullet is all it takes for you to die. Often outnumbered, but with time on your side, you can come out on top if you act with mindfulness. To do so effectively, you have to remain ever-aware of where enemies are located, where they may appear from, and what type of weapon they're carrying, if any. Each level contains moments that are smaller/tiny/compact puzzles in and of themselves. Figuring out your next move while a gun's pointed at your back, a nearby enemy is reaching for a katana, and bullets are flanking your position makes for an intense experience.

Early levels are bite-sized tutorials designed to teach you the basics: the relativity of time, how to use weapons, and how to disarm opponents. Even in these simple scenarios, engaging with Superhot is enjoyable because it grants a you an unusual advantage that enables you to overcome seemingly unfavorable odds. Once you finish a level, you get to enjoy a replay of your performance with all of the stops and starts ironed out, resulting in an apparent display of someone with superhuman reflexes and cognition.

Once Superhot establishes its ground rules, levels become more varied and interesting, forcing you to multitask and orchestrate complex series of maneuvers. In many levels, you can grab a bottle and throw it at a pistol-wielding enemy, grab their pistol, empty your clip into two enemies, then throw the empty gun to dislodge a weapon from another enemy's hand. Despite the fact that there is no single correct way to beat a given level, your methods tend to stay the same unless you're self-imposing style challenges.

Superhot's overworld-like menu is presented through a simulated computer terminal. Levels are files stored in folders, and you begin and continue your game by opening "superhot.exe" from a file manager. If you dig around a little bit and explore errant folders, you discover programming demos--animations and procedures designed to showcase how a clever programmers can bend hardware to their whims. These little gimmicks are cute, but they don't seem to do or mean anything. The problem is that I can't say for certain if that's actually the case.

Superhot's story isn't overt in the slightest, and it isn't clear where it ends. Sure, I saw the credits roll after a couple of hours, came to my own conclusions as to what the story segments I was shown meant, but some plot points are left to your imagination, while others remain hidden inside levels. It begins when a person pings you over a chat program, and offers you Superhot. They espouse its greatness, and suggest that you give it a try. As you beat levels, they circle back to see how you like it, and to update the program. Without spoiling how it plays out: as Superhot is updated, so, too, are you. Your relationship with the other user and Superhot is the crux of the story, and it grows increasingly fascinating as you fall deeper down the rabbit-hole, uncovering surprises and shocking exchanges between man and machine.

If you can manage to pull yourself away from the action during a level, going against your instincts, you can peek around some corners and discover odd environments. In these places, unlikely objects float in mid-air and isolated landmarks beckon your attention. These areas are difficult to find, and often difficult to navigate, with quirky platforming sections and unusual arrangements that toy with your expectations. It seems that if you manage to find each of these areas, referred to as "secrets," you may be able to piece together greater truths about the story and your involvement in it. I was only able to scratch the surface.

After my first hour with Superhot, I wasn't convinced that it would be as interesting as I initially hoped it would. I thought that I understood it all, but I was so wrong.

Thankfully, you don't need to solve these obtuse puzzles to finish the game, and after taking in the dark and trippy ending, you gain access to over 200 challenge levels that introduce new rules and limitations. You may be limited to one type of weapon, or one bullet for every gun you pick up. It's a generous helping that extends Superhot well beyond the few hours it takes to finish the main game. They offer the same rewarding mix of shooting and puzzle solving, but are tweaked just enough to feel fresh and distinct.

After my first hour with Superhot, I wasn't convinced that it would be as interesting as I initially hoped it would. I thought that I understood it all, but I was so wrong. While the core gameplay didn't evolve drastically, the story that drives it did, taking me along for a ride that I never saw coming. In doing so, it opened my eyes to possibilities within the game that I never considered. Superhot is a clever game with deep, hidden elements that require committed and thorough examination. 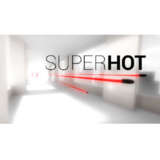 Before writing his review, Peter spent the better part of a day completing every story level and a handful of challenge levels. GameSpot was provided with a complimentary copy of Superhot for this review.