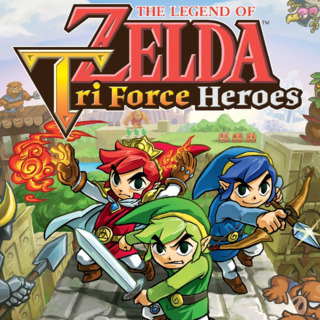 Latest on The Legend of Zelda: Tri Force Heroes

The current My Nintendo discounts expire soon. Check them out here.

Nintendo's 3DS, five years after its launch, is still the de facto powerhouse of portable gaming.

Here's everything that comes with The Den of Trials when it launches in December.

Zelda: Tri Force Heroes Gets a Demo, But It's Pretty Limited

You can get a taste for the game, but much of the demo will be inaccessible after this weekend.

The Story Behind Triforce Heroes: An Interview With Aonuma and Shikata

We interview Zelda producer Eiji Aonuma and director of The Legend of Zelda Triforce Heroes, Hiromasa Shikata about the latest addition to the franchise.

The new 3DS game and A Link Between Worlds are closely linked.

What do the critics make of Zelda's latest foray into multiplayer?

Eiji Aonuma plays an hour of the upcoming 3DS game while dressed as the franchise's hero.

Nintendo's Symphony of the Goddesses performs never-before-heard music from the 3DS game TriForce Heroes and more.

They'll perform a preview of some never-before-heard Zelda music.

Plus, Lord of the Rings and Broken Age voice actor Elijah Wood will appear on the same show.

Misdirection and totem teamwork play a key role in taking down this version of Moldorm.

Beating this boss requires some totem power. The question is, how high?

It's every Link for themself in this icy coliseum, complete with melting platforms!

This waterfall-based coliseum has a regenerating bomb in the center for each Link to swim desperately to.

Get ready to test your friendships! The Legend of Zelda: TriForce Heroes shows us that teamwork... takes some work.

In the visual style of the critically-acclaimed The Legend of Zelda: A Link Between Worlds game comes a new adventure. In this journey, three players team up– each as Link – to cooperatively make their way through inventive dungeons and battle bosses. Use the new Totem mechanic to stack three Links on top of each other to reach higher grounds and solve puzzles. Collect loot to create wearable outfits, each with a different boost or ability.

6.7
Sign In to rate The Legend of Zelda: Tri Force Heroes