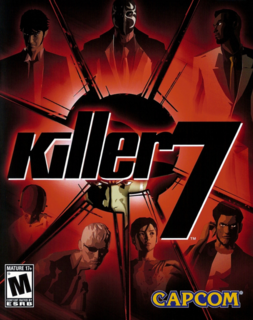 Suda51, the director of games such as Killer7 and The Silver Case, has discussed which of his games are or aren't likely to come to Switch.

From his early days as a hearse driver to collaborating with Hollywood heavyweights like James Gunn, cult video game director Suda51 walks us through his eclectic career.

Foes appear left and right as you continue your mission violence and mayhem through the hallway.

These unnatural foes meet their demise with the discharge of your firearm.

Decisions, decisions, as you make your way through a network of hallways.

A seemingly normal day for Mr. Smith turns into something rather unpleasant.

Check out Hiroyuki Kobayashi give the lowdown on Killer 7.

Things take a turn for the twisted in this movie.

Take a look at some secretive meetings in this clip.

Get a sampling of some of Killer 7's cutscenes in this movie.

Originally released in 2005, Killer7 has made the jump to PC with few changes, and that's for the better.

Check out the first 15 minutes from Killer 7, available now on PC.

The Weird History Of Killer7, And Suda51's Love For The GameCube

Ahead of the upcoming remaster of Killer7 for PC, creator Suda51 reflects on the crazy and weird journey of its development.

Killer 7 chronicles the connection between two men whose intertwined paths develop into a tale of revenge and altering personas. You play as not only one man but also as his seven other personalities in a mission to stop a wave of indiscriminate violence that's plaguing the world.