It's one of the most unusual, politically charged, and thought-provoking video games since Metal Gear Solid.

You'll just have to shoot first and ask questions later in Killer7, Capcom's self-proclaimed "surreal action adventure game" that lets you "step into the mind of an assassin." This is appropriate billing for a game that wears its edginess on its sleeve and might well leave you feeling cold at first, between its seemingly nonsensical storyline and its surprisingly simple mechanics. However, if you bear with this rather lengthy journey through to the bitter end, you'll be aptly rewarded as your mind is sent reeling. Killer7 is greater than the sum of its parts. It's pretentious and can be frustrating or tedious at times. And it's also one of the most unusual, politically charged, and thought-provoking video games since Metal Gear Solid.

The title Killer7 refers to the name of the squad of assassins you control throughout the game. Apparently employed by a sharp-witted, crippled old man named Harman Smith, the Killer7 may be just the one man and his seven split personalities. At any rate, it seems the Killer7 have been charged with eliminating a terrorist threat called the Heaven Smile, which takes the form of various monstrous creatures that tend to blow themselves up while laughing hysterically. They're suicide bombers. And the world seems to be crawling with them. They're initially almost invisible, but the Killer7 members may scan their surroundings, causing Heaven Smile's operatives to materialize. In the game, you'll navigate through various environments, gunning down dozens of heaven smiles from a first-person perspective while also solving various puzzles and piecing together the storyline.

Killer7 unfolds confusingly and initially comes across like some sort of Japanese take on Fight Club and Memento, with some shooting sequences thrown in for good measure. Turns out there's quite a bit more to it than that. Central to the plot is a near-future political struggle between the United States and Japan. As you learn more, you start to notice what seems an awful lot like a heavy-handed political commentary on today's state of affairs. And in short, while the game deliberately seems to leave itself open to interpretation, it's safe to say that Killer7 is filled with metaphors. Different characters, themes, and situations are deeply suggestive, making little sense in the context of the game but nevertheless causing you to think. Killer7 juxtaposes this sort of feel with no shortage of absurd humor, including lots of poking fun at American and Japanese pop culture. This is subversive stuff. So just when you start taking Killer7 seriously, it throws some goofy humor your way, abruptly lightening the mood as if to keep you from getting closer to the game's version of the truth.

In other words, cappuccino-sipping, turtleneck-wearing academics looking to uncover all the hidden meaning and intention in all sorts of "works" would probably have a field day with Killer7, which has so many arbitrary stylistic flourishes in it that it ultimately seems intent on being a stupefying modern art masterpiece as much as a game--more power to it. Some of the game's posturing comes across as embarrassing, especially since the English dialogue you'll be reading throughout (all the ghosts of the Killer7's past speak in haunting gibberish, subtitled for your convenience) contains a number of elementary typos. But there are just so many simultaneous layers and subplots always going on in this game that it's sure to spark a lot of charged discussion among those who've played through it. Once you've spent the 15 to 20 hours necessary to get through the game for the first time, you'll be able to go back into the experience with a whole new perspective.

Of course, you might not want to. While it's impossible to extricate the story from the gameplay in Killer7, if judged purely on its merits as a fun-to-play video game, Killer7 comes up a little short. Your character can only move along a set path: You press and hold a button, and off he (or she) goes. This is very strange at first. Why doesn't the game just let you run around wherever you want to? For one thing, the locked paths enable a lot of pretty-looking cinematic camera angles that would be terrible for gameplay purposes. And for another thing, this technique makes it so that your characters never appear lost. They always seem to know where they're going, even when you don't know where you're leading them. It's an interesting trade-off that, in the end, makes sense.

Another button lets you turn around 180 degrees so you can run back from whence you came. You'll also often come across junctions--say, a perpendicular hallway--and then you get to decide whether to continue running in one direction or the other. As you proceed, you'll frequently hear the heaven smiles' maniacal laughter. This is your cue to switch to first-person aiming so you can scan the environment. You'll spot the heaven smiles shambling toward you and may fire at will. Each character has a different weapon with its own characteristics, but regardless, the shooting action boils down to sniping. Your foes tend to have weak points--possibly on their thighs or elbows, not just their heads--that cause them to die instantly if hit. So you'll try to steady your aim and take those shots, even though a lot of the shooting takes place at relatively close ranges. The heaven smiles are creepy looking, and the first-person shooting has a pretty good look and feel to it. Still, it can get to be fairly monotonous, especially since backtracking through environments will often mean having to face exactly the same array of heaven smiles each time you go through the area.

As for the puzzle-solving portions of Killer7, they're mostly quite simple and blatant. A certain character is always there to help you through the puzzles if you get stuck, and his presence alone eventually clues you in that a puzzle is afoot. Most of the game's levels are thinly veiled key hunts, forcing you to find certain items before you can get through certain areas. In some cases, this hunting for stuff feels pretty excessive, especially when the puzzles are both nonsensical and mind-numbingly simple. Later on, they get a little more complex and more satisfying. This isn't to say Killer7 is an easy game. Gunning down heaven smiles definitely takes getting used to, and the mazelike environments you'll be fighting them in can be bewildering if you ignore the game's map feature. The map doesn't show your exact location in the level, but it shows an awful lot, such as where you need to use special items or your different personalities' special abilities.

What also makes the going easier is that you can't really die. One of the Killer7, Garcian Smith, is able to retrieve the bodies of any slain personas and restore them to life. As any of the six other personas, you're typically free to switch between personas on the fly, but you can only switch back to Garcian from certain locations in each level. If Garcian dies, the game ends. But since you'll be using the other characters to do your heavy lifting, all you need to do should one of them die is run back to that point as Garcian. It's confusing, to be sure, and it sometimes causes you to feel like you're wasting time going through the same sequence as different personas. But it keeps you from running into "game over" screens, and it also keeps you guessing. Namely, just what the hell is going on in this game? To add to the intrigue, you also collect blood as a currency from slain heaven smiles, which may then be transmuted into a serum that can upgrade your personas' moves and abilities.

Killer7 is also rather awkwardly paced, since your fight through each of your various assignments will often be interrupted by dialogue with bizarre characters that seem to love saying an awful lot without really saying much of anything. You can opt to skip through these sequences, but you'll risk missing something important. And besides, these repugnant characters, amazingly, will actually grow on you in time. Numerous other interruptions abound in the form of fairly brief but noticeable loading times that crop up in between all the bite-sized portions of the game's missions. These are noticeably longer in the PlayStation 2 version of the game, and that difference alone is enough to make the GameCube version the superior of the two. It's also marginally better-looking, and the aiming controls feel a little more responsive on the GameCube as well.

Though the gameplay itself isn't always fun, the variety of settings and the desire for some answers ought to keep you going once you get past an initial learning curve in Killer7. Yes, the gameplay itself probably could have been more entertaining or more sophisticated. But it's just a vehicle for the unusual experience that this game provides, which will take you to a surprisingly diverse range of locations and throw you for a number of mind-bending loops. It's difficult to even begin to explain some of these, much less without spoiling anything, but suffice it to say Killer7 has a number of different moments that are probably worth the price of admission by themselves.

The almost-fantastic quality of the game's presentation is probably the most literal symbol of how Killer7 is overall. The game's flat-shaded art style looks amazing at times, but on other occasions suffers from some noticeable and distracting aliasing, as well as severe fits of slowdown in the case of the PS2 version. Textures on the PS2 version also sometimes look plain and ugly. Most of the character animation looks great, though it's sad to see the otherwise lifelike Killer7 running in place when they reach a junction. Luckily, the game's stylistic achievements make up for most of the technical deficiencies, especially on the GameCube. This is one of the first games to reconcile great-looking camera work with simple controls--you can always switch to your first-person aiming when you hear heaven smiles nearby. Killer7 also does a fine job of visually mixing it up, such as how anime is used in a few distinct sequences, in stark contrast to the flat-shaded graphic novel look of the game's majority.

Killer7's soundtrack gets better and better the more of it you hear. Some decidedly eclectic music selections gradually start to make some kind of sense as they're used to accentuate certain themes. Most of the sound effects in the game are excellent, too, even for simple things like footsteps and doors closing shut. The voice acting is also of generally high quality throughout, despite not coming from too many recognizable names. Harman Smith both looks and sounds like a stately Clint Eastwood, lending the enigmatic character an immediate air of authority. Some of the speech is recycled too often. Specifically, each time one of the Killer7 scores a critical hit on an enemy, he or she utters the same one catchphrase, the most notable of which is the surly Coyote Smith's "You're f*****!" Since you'll always aim for critical hits against your opponents, it gets distracting to hear the same expression over and over again. You might want to switch between personas just for variety's sake.

Chances are you'll either love Killer7 or hate it. The game offers two difficulty settings, plus some unique bonuses for once you finish the adventure for the first time. But the way in which this game might stick with you could easily outweigh whatever replay value these extras provide. Especially for a game that's filled with lots of mindless shooting, Killer7 makes you think. And it makes you wonder why most games don't even bother to try. And maybe that's the whole point. 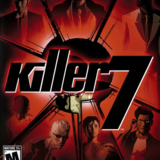