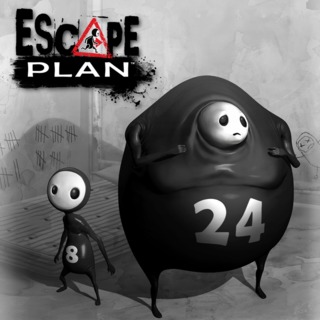 Almost, but not quite

User Rating: 7.5 | Escape Plan VITA
By Dollar75 | Review Date: July 19, 2012
After seeing the trailer for this at the 2011 Comic-con, I was instantly hooked and felt that this would be a perfect launch title to kick start my Vita collection. Unfortunately, having also bought Motorstorm RC, Rayman Origins and Super Stardust Delta, it kindof languished in the background til I had exhausted the other titles. After playing it for about a week, I was quite surprised by how addictive it can be. But is that enough?

Graphics
The first thing that struck me about this game was its made purely in black and white. In a generation where colours run in the millions and contributes quite heavily to its overall appeal (namely Rayman Origins), it was good to see some risks and I think that it certainly does help with the charm of the whole game. I felt myself being sucked into it even more because it sets up this dreary, booby-trapped ridden place. Limbo did the same thing. Obviously depending on the subject matter of the game, black and white can create certain mood.
The other thing I found appealing was the design of the characters and layout. Its designed well to give a sortof dark humour to the game.
There are one or two graphical glitches however. Like when there are sheep in your way, Laarg will just simply walk through them. Even though with other solid objects they need to be pushed out of the way, somehow sheep are ghosts in this game.

Sound
Spoken dialogue is non-existent in this game. What gives it its charm is the music, its absolutely spot on for this type of game. Its like music from the 1920's. What else is a nice touch is the audience. Although you obviously can't see them, whenever you move something out of the way or you fall over, you'll hear an audience clap or laugh. This gives it the feeling that you're playing this out for other peoples amusement and again, goes towards the dark humour.

Gameplay
The basic idea of this game is to get from A to B in the quickest time possible, which results in 1, 2 or 3 stars given. Now this does sound quite simple and in some respects it is. But as I was playing through it I felt that this game suffered from the Scribblenauts syndrome, meaning it's a good idea but it could have been executed better. I found that the difficulty didn't necessarily lie with the puzzles itself but rather having to be a finger contortionist in order to solve it in the first place. There's finger swipes on the rear touch pad for the sheep and floor panels, on the front screen for the characters and again for the floor panels as well as levers. Then you also have to control the camera to look at certain spots too. The camera isn't that good to begin with cos you have to move it to focus on your character and it also moves back to the protagonist after a while, meaning that if you're moving the camera to rid you of an enemy at the end of the puzzle, it'll move back after a while and that could result in further frustration.
The other issue is the finger swipes can be too sensitive in some areas and not sensitive enough in others. For example, one puzzle required me to move some sheep to a different floor and also use the rear touch to push the floor panels out. This turned into quite the ordeal when I had to manure the camera to the right spot, swipe to move the sheep (and the sheep moved in the opposite direction), or when they did move onto the panel, either it didn't register the swipe to move them quick enough before the panel closed or the camera moved itself back onto Lil and they died anyway and I had to start again.
These are all frustrating things BUT, then you remember that it is a downloadable game and these things are going to test your patience. That's not to say that downloadable games cannot have tight controls, but it dulls the frustration factor (unlike when I played Scribblenauts).

Final thoughts
I can see where they're going with this game, it kindof moves in on the Angry Birds or Cut the Rope territory with the use of the finger and the 3 star level rating. However, what appears to be simple on the surface can be quite the tricky beast. I like this game, I find the whole black and white screen, the dark humour and the music to be a good experience. However if this is to be the first in the long line-up of games that will attempt to get the more casual gamer on the Vita train then tighter controls need to be given. It's a good effort, but when the biggest challenge is not the puzzle but how you're going to contort your fingers in order to solve it, then there is a slight problem.
Load Comments (0)