Escape Plan brings action and puzzles to the Vita with style, but awkward controls crash the party.

Lil and Laarg are two buddies who look like bulging black garbage bags with wiry legs and arms and white masks for faces. Somehow the two chums were captured by the evil Bakuki, a mad scientist who locked them up in his secret space base. Their future looks grim indeed, until one day Lil wakes up from a nap and escapes from his holding cell. He frees his pal, and the resourceful duo work on a plan to escape the clutches of their captor. Reminiscent of PlayStation-era games by Oddworld Inhabitants, Escape Plan stars weak heroes lost in a hostile environment where their wits are every bit as important as their agility. Their adventure is a difficult and often frustrating one, but it's ultimately engaging enough to make enduring that frustration worthwhile.

Lil and Laarg are controlled using the Vita's two touch surfaces, though you rarely move them both at once. When a stage requires you to guide the pair to one or more exit gates, you can tap icons in the corner of the screen to switch whom you control. In most cases, though, you find only one of the characters in a given stage because they get split up frequently. Even when they're in the same room, they rarely work as a team. In a handful of areas you need to guide one fellow to stand on a switch to open the way for the other guy to eliminate a hazard, but such cases are the exception, not the rule.

Regardless of the character you're actively controlling, most actions are managed using the front touch screen, and the camera is manipulated with the right analog stick if necessary. You can swipe at a character to make him start moving forward in the specified direction until either you tap him to halt his movement or he brushes against a non-fatal obstacle. The rear touch pad is used to interact with the environment. It's possible to push out beams that can serve as ledges, for instance. That's not to say that the front touch screen doesn't manipulate your surroundings, however; often, you need to use it to make oversized fan blades whirl or to knock objects out of the way. Sometimes, you might be trying to tweak the environment and accidentally set your character on an unwelcome march.

The control scheme works reasonably well in low-stress situations where precision and timing aren't necessary. However, the game frequently presents you with more dangerous situations where you figure out what you need to do to succeed but you still can't triumph because the control scheme isn't up to the task. Of particular note are those moments when Lil sucks up gas and floats like a balloon. You're supposed to swipe the screen to change the direction he faces, and you need to tilt the Vita to control his angle. Often, you have to do that while also being prepared to squeeze the front and back touch panels at the same time so that Lil can fart to lose altitude and avoid a hazard.

Another early example of controls and level design conspiring to cause frustration is the Smoking Kills stage, near the end of the game's third section. You control the aptly named Laarg, who stands on one side of a wide room that features whirling fan blades where most of the floor should be. Laarg can't safely step on the fans; they'll tear him to shreds. Instead, you must tap the back side of the screen to briefly extend one of five consecutive ledges that are positioned within the wall above the blades. Each ledge remains extended for only a brief period of time once activated, and Laarg moves ponderously. Careful taps are essential once you swipe Laarg to start his crawl forward. As if that weren't enough, there's also an overhead duct from which smoke is seeping. The smoke is fatal if inhaled, so while you blindly tap the back screen and hope that your fingers find the points that trigger the right ledges, you also need to tap the front of the Vita ahead of Laarg's arrival to briefly block the inky fumes.

The problem with such stages isn't that they're unbeatable (you'll most likely rise to the challenge if you try a few times). Rather, the issue comes from the lack of satisfaction that the effort provides. When you finally clear a challenge that had you stumped for a moment, it feels like victory over a control scheme, not ingenuity. Then you're rated based on the number of times your finger brushed one of the touch panels. You are awarded up to three stars for your performance, but you can lose the third star quite easily. An errant touch of the back panel or a tap that registers but doesn't cause your character to move becomes frustrating, even when it's not fatal to Lil or Laarg. You spend a lot of time making moves and hoping that a control quirk doesn't ruin your day.

If you find that a stage is causing you too much frustration, you can opt to skip it. Even if you skip the final encounter, you can still see how the tale concludes. There's no apparent shame in taking the easy way out, either; when you fail at a stage a few times, a prompt appears onscreen to remind you that it's possible to skip to the next stage from the pause screen. That's a nice feature that you'll likely welcome if a particular stage is giving you too much grief, though it would have been better if the level design didn't sometimes make this seem like an attractive option.

While Escape Plan suffers from an awkward control interface, it still has a lot to offer. The puzzles are often quite clever, even when they're difficult, and the charming black-and-white visuals give the proceedings a fairy-tale charm that's hard to resist. Music is also a big part of the experience, whether in the form of some funny parody titles for stages, such as Lovin' an Elevator and It's Raining Sheep, or as background tunes that alternately take their cues from jazzy and classical compositions. Somehow, the combination of music and visual style make it funnier when you encounter a stage with a fancy name like La Vie En Rose and your goal is to float along a spike-lined shaft while farting. There's no in-your-face humor, sheep and flatulence aside, but levity is there if you look for it.

The core ideas driving Escape Plan are solid, and they can make for an enjoyable time, particularly if you tackle only a few stages at a time and then take a break. The interesting level design and artistic production values grapple with an awkward control scheme that often interferes with the fun. The resulting game is still worthwhile, but it falls short of what it so easily might have been. 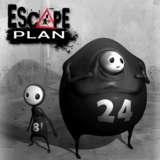