The wait will be a bit longer.

ReCore, the upcoming adventure game from Microsoft and Mega Man creator Keiji Inafune, will not launch this spring was was originally planned. A Microsoft representative tells Engadget that the Xbox One and PC game is now slated to arrive during "the latter half of 2016," though an exact date was not divulged.

"We have not yet set a launch date for ReCore, however the game will be ready in the latter half of 2016," the Microsoft representative said.

ReCore was announced as an Xbox One exclusive during Microsoft's E3 2015 briefing last summer. At the time, Microsoft assigned a "spring 2016" release window to it.

Just this week, Microsoft confirmed that ReCore will also launch on PC through Windows 10. However, whether or not it also will come to Steam remains to be seen. "We'll have more to share soon on ReCore, please stay tuned," the Microsoft representative said when asked about Steam availability.

Another Xbox One game that's coming to PC, Fable Legends, will not be available on Steam.

ReCore is published by Microsoft and is in development at Inafune's Comcept, alongside Armature Studio. That Texas-based studio also worked on Batman: Arkham Origins Blackgate and is headed up by staff who formerly worked on Metroid Prime 3: Corruption.

Joseph Staten, the co-creator of the Halo and Destiny universes, has been confirmed as the project's lead writer.

Gameplay footage of ReCore has yet to be demonstrated, though the E3 reveal trailer suggested the game follows a young woman who travels with a glowing blue orb that can possess a range of robotic companions. 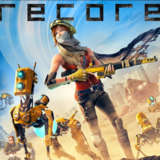