You don't need the same VR headset as someone else to play Ubisoft's games together.

Cross-platform play isn't an entirely new concept, but virtual reality headsets introduce a new layer of complexity. Ubisoft has apparently been able to address that challenge, making it so that, not only can PS4 and PC players play together, but they can do so while using different VR headsets.

Ubisoft has announced that, as of today, Eagle Flight supports cross-platform VR play. That means you can play with anyone else, whether they're using a PlayStation VR or Oculus Rift. HTC Vive will also be supported once that version of the game launches on December 20.

The same will also be true of two upcoming Ubisoft VR games. Werewolves Within, which launches on all platforms on December 6, and Star Trek: Bridge Crew, which launches on March 14, will both support cross-platform play right at launch.

"Making our VR titles cross-platform has been a goal of ours from the start and we're happy to announce that Eagle Flight, Werewolves Within, and Star Trek: Bridge Crew will be playable cross-platform on PSVR, Oculus Rift, and HTC Vive," said Red Storm senior creative director David Votypka. "Our games feature a strong multiplayer experiences, so letting friends play together regardless of which headset they own will enhance the social nature of our games and let them be played the way we envisioned."

Bridge Crew was supposed to be out sooner but was recently delayed until 2017. Eagle Flight, meanwhile, made its debut not long ago--you can read GameSpot's review here. 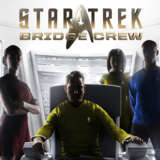