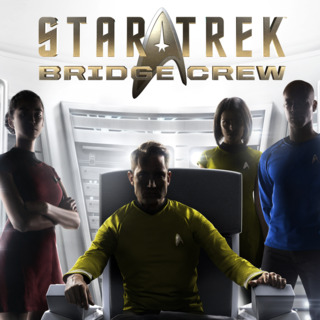 Your Star Trek voyage continues with The Next Generation DLC. Featuring two new mission types, Exploration and Resistance; plus enhancements to the Ongoing Missions mode. Playable in VR and non-VR.

Spaceships! Fast cars! Other things that aren't vehicles! New Releases is ready to throw down and drive right on through the week.

Star Trek: Bridge Crew is now available for non-VR players on PlayStation 4 and PC with a new free update.

IBM has teamed up with Ubisoft to give players of Star Trek Bridge Crew the ability to issue commands to NPC's with just their voice.

Classroom murder in Danganronpa! Enemy soldiers in Battlefield 1! Space ships in Star Trek! New Releases has all that this week, plus a stealthy orc and some adorable little robots.

The game has been delayed a second time, while the original Enterprise crew will be playable.

Ubisoft will offer cross-platform play with its virtual reality games.

The virtual reality Star Trek game was originally set to release this year.

Not All PlayStation VR Games Will Support the DualShock 4

Sony has reversed its statement, which said that the DualShock 4 would be supported by all PS VR games.

E3 is packed with fantastic VR experiences like Star Trek: Bridge Crew. Chris, Jovenshire, Sohinki, and Lasercorn sort through the best of the best.

Ubisoft has two very different VR titles on the Horizon. What do the GameSpot hosts think of Eagle Flight and Star Trek: Bridge Crew?

Where to buy
Star Trek: Bridge Crew
$39.99 at Target
GameSpot may get a commission from retail offers.

Developed specifically for VR, Star Trek: Bridge Crew is the only game to offer a true-to-life level of immersion in the Star Trek universe, where- as officers of the Federation- every action and decision you make together will determine the fate of your ship and crew.