Get some classic Star Wars gaming to go with your Battlefront.

DICE's Star Wars Battlefront isn't the only game based on the beloved sci-fi movie series being released this week. Sony has revealed Super Nintendo classic, Super Star Wars, is also making its way to PlayStation 4 and PlayStation Vita this week.

The action platformer was first released on Nintendo's console in 1992, and then re-released for the Wii Virtual Console in 2009.

The PlayStation release, according to Sony, is an "enhanced" version that has "new save features, leaderboards, Trophies, and updated display and controller options."

"Risk your life as a Jedi Knight! Join Luke, Han, and Chewbacca in their fierce war agains the evil Empire," the official description reads.

Super Star Wars is listed as a Cross Buy title, which means buying it on any of the two platforms also unlocks it on the other.

Star Wars Battlefront's trophies/Achievements list have also been revealed, and EA has launched the free Battlefront companion app, which features a card game and more. 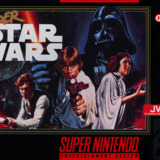