The developers behind the upcoming Monster Hunter RPG spin-off discuss aging up its visuals, expanding its multiplayer, and their favorite Monsties. 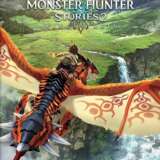 Real-time action has long been a defining element of Monster Hunter, but the series attempted to branch off into more traditional RPG territory with 2016's Monster Hunter Stories for the 3DS. Eschewing real-time hunts for turn-based battles and colorful, more overtly anime-inspired visuals, Stories was a marked departure for the franchise both stylistically and thematically, offering a different perspective on the Monster Hunter universe.

Five years later, Capcom is following that spin-off with a sequel, Monster Hunter Stories 2: Wings of Ruin, which launches for Nintendo Switch and PC next month. Through an interpreter, we recently spoke with series producer Ryozo Tsujimoto, game director Kenji Oguro, and art director Takahiro Kawano about their goals with the sequel, the decision to age up the art style, and expanding the game's multiplayer options. The following interview has been edited and condensed for clarity.

How long has Monster Hunter Stories 2 been in development?

Ryozo Tsujimoto: It's been about three years.

How would you describe Monster Hunter Stories 2 to somebody who may not be familiar with the first game?

Tsujimoto: Monster Hunter is an action game where you can hunt monsters, slay them, collect materials, forge armor, and continue on your quest on this gameplay loop. However, Stories, as the name indicates, has more of an emphasis on the narrative, and so it's an RPG, not an action game. So for players who maybe don't like the real-time battles, they can enjoy these turn-based battles that are offered in the Stories series.

We are very proud of the quality and character of the monsters [in the Monster Hunter series], and in Stories, we wanted to express that even more. So in the Stories series, you are not a hunter, you are a rider, which is a character who lives among monsters and goes on adventures with them. There's a breeding system, and you can gather more monsters for your party, so it's not only a story-based game, but it also has the element of going out on adventures with monsters.

Kenji Oguro: When the original [Monster Hunter] Stories was created, we aimed to do something with a completely different identity from a typical Monster Hunter game. So first off, we changed the perspective from a hunter to a rider. Hunters go out and slay monsters, but riders ride the monsters and go on adventures together. So from the start, our main objective was to change the perspective, and from the start we had a different identity. We wanted to focus on giving Monster Hunter fans and other players the chance to experience the worldview of Monster Hunter in a new way, in a deeper way, and focus on the narrative.

When you set out to make a sequel to the original Monster Hunter Stories, what was your main goal?

Tsujimoto: When we decided to make a sequel, we wanted to go back and look at the feedback we received from Stories 1, which came out five years ago. And so one of our goals actually was the same as when we created Stories 1, which was that we wanted to take the Monster Hunter franchise and make a game that appeals to a wide audience. And for Stories 1, with the art direction we went in, we received some feedback that the characters looked maybe younger--they looked maybe like [the game was made] for children. So when we began development on Stories 2, we wanted to course correct there and make it appeal to a wider audience.

With that in mind, we said, "Well, what can we do in order to appeal to more people?" So one of the first things we did was we built out the environments with deeper lighting and visuals, and also the characters themselves are more grown-up. We believe that we have addressed the issue of the game feeling like you can't play it if you're an adult. We believe that it will appeal to a lot of players, both young and old, and we hope everybody will enjoy it.

Takahiro Kawano: We believe that we have made vast graphical improvements for Stories 2, from characters and their proportions, to the expressions that they're able to make with their movements. In terms of the environments, there is the lighting, the shading, the expression of water. This is, we believe, something that the 3DS was not capable of [due to] the hardware limitations, so we wanted to implement as many graphical improvements as possible in this game. That also, we believe, helped in terms of fleshing out the world and making it appeal to more people as well.

Oguro: We also believe that these graphical improvements immerse you deeper into the world itself. As an RPG, when you are exploring, you can experience the environment more, like when you step on various items, and you can really interact with the world in a way that will deepen your experience. As an RPG, we believe that this graphical improvement will help players be transported into that world easier.

Are you able to talk a little bit more about how the Monster Hunter Stories 2's multiplayer mode works?

Oguro: In Stories 1, we had a unique mode to Stories [called] Versus Battles, where you can take your Monsties and pit them against the Monsties of another player. In Stories 2, we wanted to implement a co-op mode, which is, in fact, not unique to Stories--it's a Monster Hunter core element. And so we have a co-op mode and you can also do a two-on-two tag match in Versus Battles mode, which we think fans will really enjoy.

We think that only having a battling option for multiplayer was not exactly fitting for Stories, so we wanted to also include another option for co-op, which is Co-Op Expedition Quests. You can go with another player and collect eggs, because we believe that one of the biggest appeals and the most fun you can have in Stories is gathering eggs [and finding out] what's in the egg. You go into a monster nest, you collect an egg, then you bring it back to the village, and then you hatch it and you see what's inside. We believe this is one of the most fun aspects of the Stories series, so we wanted to incorporate that into a co-op element. And so we have quests that are multiplayer-only, so there are areas that you can only access through multiplayer. Also, there will be some updates that may include these elements as well, so please look forward to that.

Tsujimoto: We just wanted to make clear that, for multiplayer, you don't have to play with another player. You can also play by yourself. So there are many different ways to play that we think, in any situation, that lots of players can enjoy.

Oguro: When we created this game, we wanted to make sure that players could play Stories 2 without having to play Stories 1; they could jump right in and enjoy the game fully. That being said, as you noted, there are characters from the previous game in this one as well. So there will be a connection, points here and there that the players who've played Stories 1 will pick up on and will get an extra kick out of. So when you're out on your adventure and you meet a character that you saw before, you can say, "Oh wow, look how much they've grown," or you can get that extra thrill. But that will not impede players from playing this game without playing the previous game at all.

This is a bit of a sillier question, but what is everybody's favorite Monstie in the game?

Kawano: I like Zinogre. From a design perspective, it's really beautiful.

Oguro: I can't tell you my favorite because it hasn't been announced yet. But I will say that next up is the Velocidrome. In the beginning of the game, you are introduced to a Velocidrome, and you develop a bond with this monster. But then as you progress through the story, you veer away from this monster. And that was kind of a bittersweet, touching element that I really enjoyed.

Tsujimoto: I like Nargacuga. It has an action that you can use out in the field that can conceal your presence from other monsters, and it's really useful.

Do you have any final message for fans?

Kawano: We received feedback from the fans that they wanted a sequel, and we know it was a long time for Stories 2 to finally come out. We put a lot of effort into the development and the graphics, and we worked really hard on this game, so we hope that players will feel the love that we put into it.

Oguro: We are hoping that players will feel the essence of Monster Hunter, the action game, in this RPG. We're really proud and think that we captured the essence of Monster Hunter and the action in it. Also, we worked really hard to make it easy for players to play, just to jump into the world and have no experience with this sort of game and be able to pick it up and learn all the elements in the game naturally and progress through the game without any sort of issues. So we worked really hard to make it fun and easy to get into, and it's an RPG that we think players will enjoy.

Tsujimoto: Monster Hunter Stories 1 was released five years ago, but eight years before that was when we originally had the idea for a game that would be Monster Hunter but different. And so we have spent a lot of time thinking about this game and the elements. And what we really wanted to express when we developed this game, we wanted to make sure that we captured the Monster Hunter feel in an RPG. But we also wanted to make sure that we didn't just transmit the Monster Hunter feel, we wanted to build on that with the characters--fleshing out the characters, developing feelings with monsters, and just deepening the lore and the story of the Monster Hunter world. So we worked hard on the graphics and the visuals and really expressing the monsters, and we think that Monster Hunter fans, of course, will enjoy all those elements. But we also believe that players who aren't necessarily into action games or [Monster Hunter's] real-time battles, maybe they're more interested in story, especially if they like JRPGs--we think this can appeal to lots and lots of players, and we hope that everybody enjoys it.

Monster Hunter Stories 2: Wings of Ruin releases for Nintendo Switch and PC on July 9. A free demo will be available on the Nintendo eShop beginning June 25, and any progress you make will carry over to the full game after it launches.