PS5 Is Getting Nature Sim Away: The Survival Series

You'll play as an adorable marsupial.

The PS5 is getting a sugar glider-centered nature sim titled Away: The Survival Series. Players will get to assume the identities of sugar gliders--flying, leaping, and climbing like they do--and "embark on a perilous journey through the wilderness to save [their] family." The game is expected to release sometime in late summer of 2021.

Canadian developer Breaking Wall took to PlayStation's blog to introduce the gameplay, which includes stalking prey and coming face-to-face with the sugar gliders' natural predators, including the Coral Snake.

Other features include a photo mode--to capture players' exploits as an enterprising sugar glider--and the ability to play as other species. Players can take the POVs of salamanders, beetles, frogs, spiders, and more.

While the game will be available on the PS4, Breaking Wall recommends playing the game on the PS5 for maximum graphical setting, Documentary Experience. Mike Raznick, who worked on the acclaimed nature documentaries Life and Planet Earth II, will provide the music for the game.

Away: The Survival Series was funded through Kickstarter, and CA$135,789 was raised to help finish the game. The game will be available on PS5, PS4, and PC. 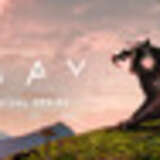