The classic adventure game will sharpen up and improve its cinematics for this new release.

Blade Runner: Enhanced Edition was announced in March for PC, Switch, PS4, and Xbox One, and now we've got a look at how the game will improve the original's cutscenes. The game, from port and update specialists Nightdive Studios, will arrive with sharper resolutions than what was possible in the original.

The cutscenes, seen in the trailer below, have been cleaned up--they now run at resolutions up to 4K, and at 60FPS (compared to 15FPS in the original). Character models have been cleaned up, but the game looks like it'll essentially be the same as the beloved original, if these scenes are anything to go by.

You could argue that a certain something is lost in the cleaned-up scenes, as the grain in the original allows your imagination to fill in some details--but it's clear that work has gone in to bring this release up to modern standards. You can watch the new and old cinematics side-by-side in the video below.

The Enhanced Edition is still in development, and a release date has not been announced. If you want to experience the original Blade Runner experience, which was, for a long time, essentially impossible, you can check it out on GOG. 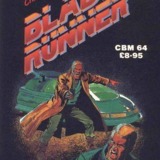