It's something unpredictable, but in the end it's right.

Beat Saber now has a new Green Day music DLC pack that adds six tracks from the band's career. The DLC was announced during The Game Awards, where Green Day also performed.

After opening with their 1994 hit Welcome to Paradise, the band played Father of All..., the titular song from their upcoming album, while footage of the song being played in Beat Saber was projected behind them. Beat Saber DLC was announced immediately after, bringing six songs-- a mix iconic hits and new singles from Father of All..., their upcoming album due in February--to all platforms. 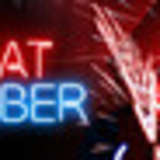