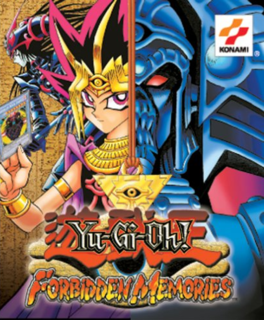 A decent game for the year it was made in.

User Rating: 8 | Yu-Gi-Oh! Shin Duel Monsters (PSOne Books) PS
By TeenGamer92 | Review Date: November 21, 2009
Yu-Gi-Oh: Forbidden Memories was the first game that I got for my PS2 (I know it was a PS game). For the day and age that it's from, I consider it to be a pretty decent game. I can't remember much of it, seeing as I was like 7 when I got it, and later traded it into EB Games. But what I do remember is that you'd play first as a Pharaoh back in ancient times (Yami) who is then sealed in the Millennium Puzzle. You go to the present where Yugi finds it, blah blah blah, you join a tournament where you're thrown back into the Pharaoh's time and you must fight your way out. I never beat it, but it was an awesome game. Plus, there was the option of seeing the monsters fight in 3D by pressing the O button something for your attack instead of the X button. Also, what I thought was odd was the random combinations of fusion monsters that you could make in the game. One last thing I can remember in the back of my head was when my older brother wanted me to wake him up to see me play the game bright and early in the morning.
Load Comments (0)