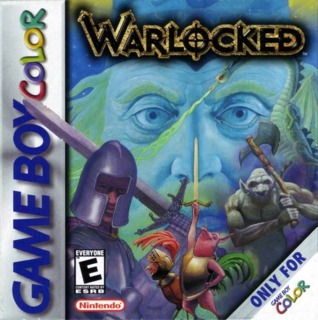 User Rating: 8.8 | Warlocked GBC
By RuggerBushy | Review Date: January 21, 2006
The controls in the game are actually very similar to some PC RTS games, simply, you click on a unit, and, depending on it's position in the game, you tell it to do it's job. Let's say you click on a Grunt (worker), and click on a mineral, he goes and does his job. That goes the same way with Knights and Archers, and Zog's race as well.

The depth in this game is great, there are two entirely different armies on a campaign against each other, and you get to control both of them. The Human race is commandeered by Princess Azarel, and the opposing race is head by Cheif Zog. There are a large variety of levels, each more complex and different than the last, there are three different buildings you can build to house and use in your offensive tactics. The farm, for example, acts as a unit storage building, allowing you to have more units. The Barracks, (these are all the names of the human buildings), is obviously used to make Knights and Archers. And then there is a Guard Tower, which can defend your fortress by shooting arrows at an attacking enemy.

There is pretty much only one downside to the Gameplay, and that is the AI of your units. If you command them to go around a structure or something, the unit will most likely get stuck in the structure, forcing you to take baby steps around the terrain, to get where you want to be. But this can all be solved with patience, and I, myself, have a lot of that, so I didn't have much of a problem with it once I got used to it.

The sounds of the game were one of the strongest points in the game. The music is cool and cheerful, and another cool thing that was added to the game, is that the units talk! Yes, the units actually talk! In some next gen consoles today the units don't even talk. And the voices aren't that hard to hear either, like if you click on a Grunt, and tell him to go to work, he might say something like ''Yes, commander!'' And it is all very clear.

The replay of this game is pretty good, not as fun as the first time, but once you get your strategy down pat you like to show it off again. Replaying isn’t only just because you beat the game, but to get more units for your army you can use against a friend. This game is hard to put down at some points. A great game, good strategy is involved. It is good for those GameBoy lovers. If you like WarCraft (for computer), you will love playing this game!
Load Comments (0)