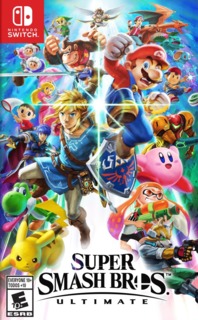 Super Smah Bros. Ultimate was released for the Nintendo Switch on December 7, 2018.

The biggest reason why Smash Ultimate is the best Smash Bros game ever since it has every single playable character from Smash 64 all the way to Smash 4 for the Wii U/3DS. Plus, all of the playable characters from the previous four Smash games are included in the base game.

Plus, with adding back some of the characters that were last playable in Brawl such as Snake, the Ice Climbers, and Wolf brings out a new oppontunity to fight against characters that were previously only playable in Melee such as Young Link and Pichu. Also, speaking of Link, Smash Ultimate is the first Smash Bros. game where Link, Young Link, and Toon Link are finally playable together in the same game.

There are also some DLC fighters that were eventually included in Smash Ulimate such as Piranha Plant, Banjo and Kazooie, Joker from Persona, Terry from Fatal Fury, Min Min from Arms, Byleth from Fire Emblem, Hero from Dragon Quest, Sephiroth from Final Fantasy, and Steve from Minecraft.

Is Smash Ultimate still the perfect Smash Bros. game of all time. No. Since there are a couple of changes that I would personally make if I worked for Nintendo. For instance, Nintendo should have kept the Stage Builder mode in the base game instead of including it in a future update/patch. Since, the Stage Builder mode was present in the base game for both Brawl and Smash 4 (Wii U version). I also would have included a few more past stages from Smash 64 to Smash 4 personally. Plus, there aren't anough new stages included in Smash Ultimate. So, some of the content in Smash Ultimate is still bare bones, in my opinion. Plus, Nintendo unfortunately didn't bring back the Break the Targets mode that was present from Smash 64 to Smash 4.

However, Marth has been top tier in both Melee and Brawl, but took a nose dive in Smash 4. Since, Marth was orignally bad in Smash 4, but the patches/updates made Marth a good/strong fighter again.

The graphics in Smash Ultimate are pretty cartoony for the most part which is mostly similar to how the graphics are in Smash 4 (Wii U version). Just like in Smash 4, the characters look a lot brighter compared to how dark/realistic they look in Melee and Brawl.

Smash Ultimate brings back a lot of past soundtracks from Smash 64 to Smash 4, Plus, there are also some new tracks that have been included in Smash Ultimate such as the tracks from Super Mario Odyssey and The Legend of Zelda Breath of the Wild. For the first time, there are various playlists that you can listen to from the Smash Bros., Mario, and Zelda series, for instance.

In World of Light, you defeat various enemies along the way in order to collect various Spirits. You can use snacks to level up Spirits and max out their levels which is 99. There are some Spirits where you can max out their levels, and level a Spirit up to level 99 one more time to reveal the sticker's final form. When you battle against enemies, a brief description is listed to let you know what requirements that you need to defeat various enemies. You randomly summon one plus up to three extra Spirits to help you out in battle. However, sometimes the game let's you know when you're at a Spirit Disadvantage meaning that it would be more difficult to defeat enemies that way. So you can press a button to have the game automatically pick and choose the right spirit that you would need to defeat various enemies.

You can also collect extra various Spirits without being in the World of Light mode. However, there's a time limit before a Spirit will temporary disappear before they reappear again another time. Once you win a battle, you have to time your aim perfectly at a circle that consistently rotates/spins. The game gives you one more chance to aim your shot again if you miss it the first time. If you miss your shot a second time in a row, then the Spirit will disappear. So, you would have to wait for that Spirit to reappear on screen again. Sometimes, there are some items that you can use that makes it even easier to time your shots perfectly especially if the circle is spinning faster than normally. Some items that you get that can help slow down the speed of the spinning circle, and you can also break the circle in half with another item. As a rule of thumb, the more difficult the enemies are to kill, the faster the circle will spin. The game let's you know how easy or difficult the enemies are before you fight against them.

There are also various Spirits to collect from all of the DLC fighters that have been previously added in Smash Ultimate. This time around, you automatically earn the spirit as a reward instead of aiming at circle to collect Spirits.

Once you play Smash Ultimate for the first time, you can only start off with playing as the original eight fighters that first debuted in Smash 64. The original eight fighters from Smash 64 are Mario, Donkey Kong, Yoshi, Link, Fox, Kirby, Pikachu, and Samus. Since, Smash 64 originally has four unlockable characters which are Ness, Captain Falcon, Jigglypuff, and Luigi.

Since Smash Ultimate has the most amount of playable characters, it will take you a pretty long time to unlock the rest of the characters in the main modes and in the World of Light Mode separately.

You can also turn off Stage Hazards for the first time in Smash Ultimate. Which makes it an ideal way for those who still play Competitive Smash. Like in Smash 4, you can also change the forms of the stages in Smash Ultimate where you can pick and choose a stage from either their original forms or their smaller, Battlefield forms. Which changing forms of the stages first debuted in Smash 4. Also, for the first time, you choose a stage before picking a character in Smash Ultimate. Since, you chose a character before you pick a stage in the past Smash games.

There are also event modes for collecting Spirits and playing online from time to time. One of the past online event modes featured only characters that you can play as that debuted from Melee such as Marth, Roy, Bowser, Peach, Dr. Mario, Ice Climbers, Mr. Game and Watch, Ganondorf, Zelda, and Young Link, for instance.

Super Smash Bros. Ultimate is definitely the best Smash game in the entire series mainly since you can play as all of the characters that debuted from Smash 64 to Smash 4. Plus, online play and Amiibo modes return in Smash Ultimate. For the first time since Brawl, you can do a brand new story mode called World of Light. Smash Ultimate might not have every single stage that came out from Smash 64 to Smash 4, but there's still plenty of various stages to pick and choose from.

*Smash Ultimate is the first Smash game since Melee to include all of the playable charcters from past Smash games.

*There's a fresh load of new fighters in Smash Ultimate (in the base game and DLC).

*You can collect a bunch of Spirits and play on a brand new World of Light story mode.

*There are special events for collecting Spirits and playing online from time to time.

*Stage Builder should have been present in the base game.

*Break the Targets mode is absent in Smash Ultimate.

*Not every one is happy with certain characters that debuted and didn't debute as playable characters in Smash Ultimate.

Overall, GameSpot score 9 out of 10