WarioWare: Touched! leans way too heavily on the DS touch screen for its own good.

You know, if you're absolutely dying for a new WarioWare fix, Nintendo's new DS installment, WarioWare: Touched!, fits the bill. It does most of the things the other games in the series do, only it does them with the touch screen instead of a D pad or any buttons. Unfortunately, that's also where this installment sort of falls apart. It's a good product, overall, but its overreliance on touching means that many of the microgames have you doing the same sort of activity again and again. WarioWare's greatest strength has always been its variety. But without that same variety here, WarioWare: Touched! gets old fast.

The same basic story concept from the first game applies here. Wario loves money. Hey, who doesn't, right? In this installment, Wario manages to get his hands on some kind of newfangled dual-screen handheld game system, so he quickly sets his old plan back into motion: exploiting the locals to create microgames for him so he can keep all the profit for himself. Touched! doesn't really have a story arc, per se, but each set of games is associated with a character, and each character has an intro and an epilogue that bookends his or her levels.

The gameplay also sticks closely to the WarioWare concept. Your job is to play through these microgames, one after the next. You never know which one you're going to see next, and each clocks in somewhere around the five-second mark. Each has one simple task that you're asked to perform, and all these tasks involve the touch screen or the DS's microphone. You'll pop balloons with the stylus. You'll pop bubbles with the stylus, too. You'll even have to pop some of those little air bubbles that come wrapped around carefully shipped items with the stylus as well. Popping aside, there is some variety here, but most of the games involve tapping the screen in a specific spot, dragging an item around the screen with the stylus, drawing lines on the screen, or some combination of all three. The microgames stick to the same style found in other games in the series, and some of them have a great deal of charm. Also like the other offerings in the series, Touched! throws a bone to nostalgia fiends in the form of a section of games that are modeled after classic Nintendo games. In one of the Mario-themed ones, you'll have to poke a bunch of Super Mario Bros. question blocks to get coins. A Legend of Zelda-style game has you prodding fairies before time expires. Metroid makes an appearance, too, in the form of a contest where you must drag metroids off of Samus and keep them away until time expires.

With the constant poking, dragging, and drawing these contests throws at you, it's easy to get good at them awfully fast. If you're cool under pressure, were any good at the previous WarioWare games, and are handy with a stylus, you'll get through the entire game in around an hour and a half. Of course, you won't have seen every single microgame or unlockable object if you just blaze through it. Most of the unlockable items are just weird little toys to mess around with, though some of them are really, really neat. One is a little electronic harmonica that plays when you blow into the microphone. (The buttons on the system are used to play different notes.)

The look of the game hasn't changed much from the original GBA WarioWare. The art style is still completely insane, though the sequences that lead in to and out of each level aren't terribly interesting. The music that plays throughout each level speeds up and gets more and more manic as you play, and it syncs up with the action well. The music in Ashley's stage even features full-on English vocals, which is a nice touch.

WarioWare: Touched! leans way too heavily on the DS touch screen for its own good. Touching may be good, but in WarioWare's case, touching is practically all you'll do, so unlike the WarioWare you know and love, it gets boring. If the games had a little more variety, it wouldn't be a problem. But as it stands, too many of these games have you doing the same type of activity, which isn't exciting for very long. Fans of the series are advised to wait for the next GBA installment in the series, WarioWare: Twisted. That one's already out in Japan, and it's much, much better. 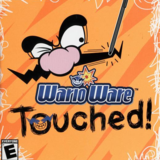 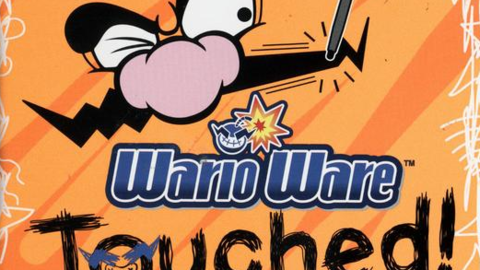 Wario makes his debut on the Nintendo DS with hundreds of all-new minigames. Now you must complete your goals by using the touch screen and a stylus.