Top Spin 2 offers an authentic and deep portrayal of tennis, along with a decent selection of player modes and real-life players.

Tennis fans looking for a rousing game of tennis on the go should come away relatively satisfied with Top Spin 2 for the Game Boy Advance. It may not offer all of the ridiculous court settings, minigames, or story twists that Mario Tennis: Power Tour does, but what it does offer is an authentic and deep portrayal of the sport, a decent selection of play modes, and a good assortment of real-life players.

The likenesses of Roger Federer, Venus Williams, and Maria Sharapova headline a roster that includes 16 actual male and female tennis professionals. Ten different court locations are available, including real-world venues from tournaments such as Wimbledon, the US Open, and the Australian Open. A no-nonsense set of play modes organizes matches for exhibition, tournament, and career play. One-off exhibition matches can be waged against the CPU, or you can compete against a friend using two GBA systems and two game cartridges. Career mode is set up just like the similar mode found in other tennis games; you create your own custom tennis phenom and gradually upgrade their skills by playing minigames and participating in tournaments.

Once you figure out the ins and outs of the controls, the game is pretty much a joy to play. The directional pad is used to control player movement and to aim shots, while the system buttons are used to input the various shot types. Basic flat, topspin, and slice shots are performed by pressing the two main buttons, while advanced shots, such as lobs and drop shots, are keyed by holding one of the shoulder buttons and subsequently pressing either A or B. In most cases, you can hold the button longer in order to build more power and spin into the shot. The one quirky aspect of the controls in Top Spin 2 is that you can't simply tap a button to make your player swing the racket; you have to keep the button pressed until they begin their motion. If you tap the button, they'll just stand there and let the ball zoom by. This forced input delay does make last-ditch swings impossible, but logically it makes sense, because real tennis players need to wind up at least a little in order to return the ball. Overall, the shot system is easy to learn and provides a great deal of control over the speed, arc, and placement of shots.

Career mode offers a fun way to role-play your way up through the ranks of the pro tennis circuit. Initially, your custom character won't have any status or skills, but by winning tournaments and playing minigames you'll gradually increase their ranking and earn points that can be put toward their various skill ratings. New outfits and hair styles can be collected by spending tournament winnings in the shop. A world map lets you pick and choose which events to enter and gives you instant access to any of the six different minigames.

The minigames are fairly fun and do a great job of teaching the shot system's intricacies. Serve Sniper challenges you to hit targets on the opposite side of the net. Inflatable Carnage tests your ability to pop inflated targets with power shots. Shot Sequence is a Simon-style game in which you have to hit sections on the other side of the net in the order shown. Ball Machine offers basic return practice. Training Loop lets you practice lobs and drop shots. The last minigame, Tic Tac Toe, is a tennis-themed variation of the classic pen-and-paper game. Although other tennis video games typically offer a larger selection of minigames, the relative lack of selection here isn't a major shortfall because each game is conceptualized so well.

In terms of presentation, the graphics and audio in Top Spin 2 take a no-nonsense approach. All of the action is depicted from an overhead viewpoint. The game doesn't interrupt the action with replays or player reaction cutaways, like so many other sports games do. Court backgrounds are photorealistic and beautifully shaded, although there's nothing going on in them apart from what the players and the ball are doing. The sprite-based players look authentic, exhibit a wide range of motions, and animate smoothly. More importantly, because the animation is so smooth, it's easy to pick up and follow the ball even during heated volleys. The audio supporting the visuals doesn't necessarily impress, but the sound effects do get the job done, particularly the chair umpire callouts, which mention player names along with the usual service and score updates.

All in all, Top Spin 2 for the Game Boy Advance is a solid portable tennis game. It may not offer the same large roster and diverse selection of play modes that its Xbox 360 counterpart does, and it may not belabor its career mode with story sequences like Mario Tennis: Power Tour does, but the players and play modes that it does have are quite sufficient in light of the game's rich shot system and buttery-smooth visuals. 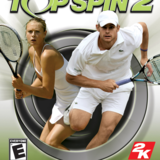