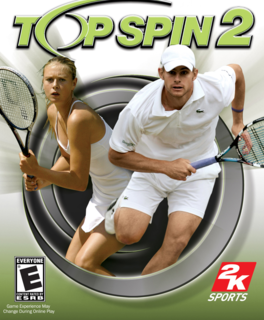 As a result of GameSpy's closure, PlayStation 3 versions of original Borderlands and Civilization Revolution will no longer be playable online come May 31.

This edition of Start/Select brings you all the hot goss from the Nintendo 3DS launch event, goes hands-on with Marvel vs. Capcom 3, and speaks to 2K Czech president Stephane Dupas about Top Spin 4.

Ryan Davis serves up Top Spin 2 on the Xbox 360

Peter Moore gives us the status of the Xbox 360 and hints towards what's to come.

Roger Federer and Andy Roddick take it to the court at the Australian Open.

This must-see video features a slew of visually impressive Xbox 360 titles, including Quake 4, Project Gotham Racing 3, The Darkness, and more.

2K Czech president Stephane Dupas takes us through what we can expect to see in upcoming tennis sim Top Spin 4.

We string our rackets tight for a hands-on look at the latest tennis game from 2K Sports.

Top Spin returns for another round of simulation tennis on the Xbox 360. In Top Spin 2, you can play as a variety of real tennis champions, including Maria Sharapova, Venus Williams, Andy Roddick, and Lleyton Hewitt, or your own customized player.