The big come down.

Imagine if Rockstar made a Grand Theft Auto 2.5, keeping the old GTA's top-down perspective, borrowing GTA III's tongue-in-cheek 70s-crime-flick ambience, and adding in GTA V's heist mode. That’s the fantastic aesthetic groundwork The Masterplan lays as the basis for its take on the heist genre, and God bless it for the attempt to do something that cool with it. The problem here is that the game pairs its delightful dreams of tense, top-down robbers-n-thieves flavor with a cumbersome point-and-click adventure game mechanic that murders any immersion in the missions right from the first moment you gain control.

That's not an exaggeration. You get a cool introduction, in which your antihero gets sent to the slammer for a crime he didn't commit, vowing to get revenge on the society that wronged him. The intro gets you all pumped to bust out and take to the mean streets--and then the game starts, and your character, Joey, wanders his dank jail cell, a single guard outside, when someone manages to get him an unloaded gun.

Here the game shows off its best gimmick: its gunpoint mechanics. Keeping a gun trained on someone allows you to give them orders, like opening a door for you, walking hands up into an empty room so you can lock the door behind them, or knocking out another NPC at your behest. It opens up all sorts of possibilities for how to approach heists, and as long as the intimidation level--represented by a slow-cycling circle icon--stays up, you can get through just about any scenario without ever having to fire a shot or move stealthily around a place looking for the right insertion point.

The problem is that the game demands smooth, fast, reflexive actions, but something that absolutely begs to feel as fluid as Hotline Miami instead plays like The Sims. The simple act of having your character pull a gun on another character in a hectic, time-sensitive moment involves hitting the spacebar to go into slow motion, left clicking to select your character, right clicking your character to open the radial, selecting a gun, right clicking again to have the character face the enemy, and praying that the NPC is close enough to your character's vision cone to stop whatever they're doing. If not, you'll need to click a point near the enemy and have your character saunter over, without the benefit of slow motion, which more than likely means the NPC will get to call for reinforcements, which you don't want because that typically gives you 30 seconds until a cop convention forms.

The first stage presents a fun, tense scenario of convincing a guard to open your jail cell while you've got him covered with a gun. Your options are plentiful and great. You can knock him unconscious or lead him outside and then knock him unconscious. You can lock him in your cell and make him hand over the key. All these great options involve a slow, choreographed, dialed-in set of button presses that bore you when it should be exciting.

This sad contradiction permeates the whole game. You pick places to hit from a varied set of locations around the city, ranging from cleaning out a mini mart, a diner, and an arcade up to elaborate multi-criminal capers at seaside resorts, banks, and casinos. All these places teem with security monitors, proprietors who likely carry the keys to the rooms with the big scores, armed guards, and any number of good Samaritans who won't hesitate to run to a payphone to bring down the long arm of the law. With enough money, you can hire a set of disposable antiheroes to help you take the joint down, but that doesn't guarantee your success. The whole thing could go pear-shaped with one false move, but a sense of urgency never exists when you have to wrestle with the controls more than you do with fragile explosives, a super loud safecracking device, or a captive hostage's will to live. One of the saddest failures I encountered in the game involved forcing the owner of a diner outside at gunpoint, having a bystander run in and try to stop me, having to take my gun off the diner owner to deal with that problem, only for the owner to try to give me a bum-rush. The selectable reticle indicators for all three characters converged with mine and I couldn't move away from either character, leaving me to get beaten to death.

The tragedy is that the game completely has the right spirit otherwise. The game's tone conveys 70s grit while staying animated and tongue in cheek, and the score is full of spy-flick flutes and wah-wah guitars. Heists have multiple approaches, and the gunpoint mechanics are a great elaboration of an idea Payday and its ilk have been paying lip service to for years now. The idea is ripe for building a game around, but it can't fly playing it so slow and technical. Many a thief has probably had to come up with a plan B for when a heist goes wrong, but here, even the simple act of walking into a building involves creating plans A through F. As such, The Masterplan feels like the most tragic kind of missed opportunity: a set of viable ideas rendered inert in practice. 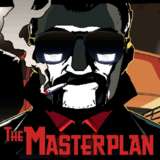 Between Invisible Inc, Neon Struct, and The Masterplan, Justin Clark has been immersed in the stealth genre this year, to the point that he has taken a liking to kicking in bathroom doors and threatening toilets to self-flush at gunpoint, before demanding they tell him where the non-existent safe is. He has since been given a prescription copy of GTA V. By order of a city court.