Banana Blitz stands as one of the first, best proofs of what the Wii is capable of.

The original Super Monkey Ball was easily one of the best, most surprising games to appear on the Nintendo GameCube when it launched back in 2001. It made the deceptively simple task of rolling a ball from one end of an obstacle course to the other a tense, diabolical challenge that could fray the steeliest of nerves yet still be immensely satisfying and addictive. A more robust sequel followed, but the series has been withering since, a malady that seemed to culminate in the bastardized Super Monkey Ball Adventure earlier this year. It seemed the series had run its course, but along comes Super Monkey Ball: Banana Blitz, which reinvigorates the franchise with a warm new look, an intuitive control scheme, and a selection of multiplayer minigames, the volume of which verges on overwhelming. Diehard fans may feel a little let down by a perceived decrease in difficulty, and there's a wide range in quality within the 50 multiplayer minigames. However, Banana Blitz is still about as good as Super Monkey Ball has ever been, and it serves as a great example of how the Wii's uniqueness can be put to good use.

Since it first appeared, the main game in Super Monkey Ball has always been a one-handed affair. With only the ability to roll around inside your translucent bicolor hamster ball, control has classically been limited to a single analog stick. This standing simplicity makes the transition to the Wii Remote a natural one. The game makes use of the remote's gyroscopic features for movement control, so tilting the controller forward, back, and side to side produces the expected effect onscreen. There's a simple elegance to these controls, which are responsive enough to give you as much subtle movement control as the game demands. This sensitivity means that it takes a light touch and a steady hand to play well. The game seems to take its increased learning curve into account, as it does a good amount of hand-holding over the first few levels. After that, though, the difficulty ramps up steadily, and about halfway through you'll experience the kinds of tense challenges that you can feel in your stomach. An unexpected side effect of the control scheme in Banana Blitz for right-handers is that movement control in past Super Monkey Ball games (and, generally speaking, most modern 3D action games) has been assigned to your left hand, so the instinctive response of putting the remote in your right hand can feel strange at first. It wears off, but it's something you'll need to get comfortable with.

The challenge of Super Monkey Ball has always stemmed from managing your monkey's momentum as you navigate narrow ledges, moving platforms, and loads of nasty obstacles designed to knock you right off the course and into oblivion. A time limit on each obstacle course makes the inherently tricky tasks at hand that much more urgent. These basic, defining characteristics still play prominent roles in Banana Blitz, but the game makes a few significant alternations to the formula that definitely give the game its own feel. Perhaps most profound is the ability to jump, which is done with the A button on the remote. As simple as it may sound, it's a real game-changing ability, and it's something that is taken into account in the level designs. Beyond this fundamental change, the level design in Banana Blitz has undergone a slight alteration. It's still plenty intense, though not nearly as draconian as the first two Super Monkey Ball games. Instead, you'll find longer levels with a greater number of slightly lesser challenges, the net effect of which is that the gameplay's inherent tension is given more time to build.

As you progress through the eight worlds that compose the single-player game in Banana Blitz, you'll encounter regular boss fights. These usually involve taking on a larger-sized enemy with a single weak spot that you have to figure out how to exploit. Some of them, such as one where you have to roll your way across the back of a giant mechanical dinosaur, are quite memorable, though others can feel a little generic compared to the otherwise singular Super Monkey Ball gameplay style. The inability to control the game's camera can be frustrating in certain boss fights, as well, due to the way it locks onto the boss during these sequences. Still, the boss fights break up the action nicely. Overall, there hasn't been a Super Monkey Ball single-player experience that's felt this good in years, which makes the game's relative brevity a little disappointing. The latter half of the game features plenty of levels with 90-second time limits that can easily take you a good half-hour to get past, and it'll take expert players at least four or five hours to get through it. The action is consistently intense enough to make real marathon sessions hard on the senses, but the number of levels simply isn't up to series standards.

Instead, Super Monkey Ball: Banana Blitz puts a much greater emphasis on the multiplayer component, something which has slowly taken on a life of its own since first appearing as an aside in the first Super Monkey Ball. There are 50 different minigames to choose from--an intimidating number, though in reality many of them share similar control schemes. Most games feature full four-player support, though there are a few one-on-one minigames as well. Splitscreen is prevalent, but you'll also find plenty of games where players share the screen or play sequentially. There's still a great variety in the minigames, and all of them make pronounced use of the Wii Remote, with a number of them also requiring that the Nunchuk be attached. You'll play whack-a-mole, hunt for treasure in a minisubmarine, touch down a spaceship ala Lunar Lander, slingshot monkey balls at tin cans and balloons, hunt other monkeys in a first-person shooter, play Simon says, red-light green-light, play a ring-toss game, scoop goldfish out of a pond, compete in a snowboard race, and much more.

Some of the best demonstrations of what the Wii's motion-sensing and gyroscopic controls are capable of at launch can be found within the multiplayer component of Banana Blitz. The groundwork laid by minigames like Monkey Wars could easily be expanded into stand-alone games, and there are some really different multiplayer experiences to be had here. They're not all winners, though. Sometimes the controls aren't responsive enough to support the minigame concepts, and sometimes the minigame concepts aren't interesting enough to warrant more than a couple plays. It's understandable why the game takes a "see what sticks" mentality here, but it's unfortunate that you have to wade through some pretty unplayable games to figure out what really works.

In addition to the crazy new controls and the volume of multiplayer minigames, Banana Blitz gives Super Monkey Ball a much-needed visual makeover that gives the game a much more cartoony feel. There's lots of flat-shading on the monkeys and the world around them, and the palette gives preference to softer, warmer colors. The monkeys themselves also have new, energetic animations that help give each more pronounced personalities, and the eight worlds in the single-player game have a unique look to them. Banana Blitz supports standard-def widescreen support and also runs in 480p for HDTVs. You definitely get a bump up in clarity when running in HD, though the game's sunny appearances look good either way. The whole playful tone is backed up by the game's joyous soundtrack, which can be so exuberant that it takes effort for it to not rub off on you.

With the Wii blazing a daring trail, there are definitely questions as to how well the unique controller concepts will actually work out. Super Monkey Ball: Banana Blitz serves as a great proof of concept, making some great, varied use of the Wii Remote and Nunchuk. The length of the single-player game and the inconsistent quality of the multiplayer minigames are lamentable, but the highs are high enough to make this one of the most highly recommended Wii launch games. 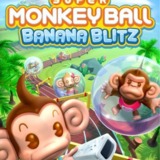