Stranger in a strange land

When Stranger of Sword City starts, you are the only surviving passenger from a plane that left Japan and somehow ended up crashing into another dimension, a ruined purgatorial wasteland strewn with the remnants of our world. It’s an apt setup for a game that finds itself helplessly trapped between worlds. It’s too obtuse, too lackadaisical about its plot to hold your interest, and too threadbare to offer worthwhile depth. It’s a game fundamentally trying to be different, but trips up trying to fit any of its innovations onto the basic framework.

That framework is a rudimentary first-person turn-based dungeon crawler, a style that seldom appears in the modern age. You and a team of up to five other warriors set out to kill the world’s most dangerous monsters--known as Lineage Types--in order to collect special crystals formed from their blood. Those crystals can, in turn, be given to one of the three main factions for power, glory, and hopefully a way home. You accomplish this by wandering a crudely rendered 3D grid-based labyrinth, looting treasure chests and picking fights with painterly cardboard cutouts. There’s no elaborate summon animations or spellcasting here. Hits from the game’s varied assortment of blades, wands, and throwing weapons are displayed as chintzy slashes and flashes onscreen. It’s all very much in keeping with the retro styling, but for an RPG trying to prove its worth in 2016, it makes the game appear noticeably shabby.

Stranger of Sword City tries to make up for that with its layered character customization system. You can select the look of team members from an assortment of dozens of beautiful, anime-inspired portraits, as well as assign a class, stats, a race, and an age, which determines how your character gains experience points. Your job and race has some influence on your starting stats and skills. Fighters have high strength, wizards and clerics high magic, different races grant a single inherent skill, such as being able to see and disable dungeon traps. Once you get to the first hub city, you have the option to create your own crew with varying traits, and in theory, the necessary skills to tackle any challenge that crosses your path.

In practice, the dungeons are set up in such a way that no matter your assortment of abilities, you’re rarely in a place of equal footing with the game. Enemy stats in any one dungeon can vary wildly; you could have a fight against four enemies that lasts 45 seconds, and three steps later have a battle with two higher level enemies that drags on for upwards of 20 minutes. Magic typically deals more damage than just slashing away ad nauseum, but magic points are scarce and items allowing you to recover it are rare and expensive. A wizard or cleric who runs out is essentially useless, and it’s usually better to run back to home base to recover than risk fighting on with depleted resources. This leads to a lot of grinding and backtracking, which might also be acceptable if the game wasn’t painfully stingy with experience points, even with the more arduous fights that one might come across.

Combined with everything else slow and grueling about Stranger of Sword City, permadeath becomes the final straw.

Better weaponry and gear can help. There’s a blacksmith in the hub world who sells weapons and items, but these tend to be prohibitively expensive and most of his wares offer only nominal improvements to what you’re already carrying. There is an interesting alternative, however. One of the smarter mechanics in the game is an ambush system where you can spend a special pool of ability points called Divinity to become invisible in specific spawn locations in each dungeon, and wait for high level enemies to show up. When they do, killing them nets quite a bit of XP, and offers a chance at a special chest full of decent gear, but only if you’re able to kill the leader of the pack before he decides to run off. Which, taking into account your general underpowered nature, even in later hours of the game, is a rare occurance.

Inevitably, even if you take the time to level up several times before walking into a new dungeon, you will run into either a new trap, a new obstacle, or a super-powered, hard-hitting enemy out of nowhere that kills characters in one or two hits. Next you'll be subjected to the game’s least-welcome dalliance with current trends: permadeath. Each character has a certain number of lives, determined by the character’s age--the trade off is characters with fewer lives gain experience/abilities much faster. When a character’s life is lost, they can be taken back to home base to recover, which in itself can take hours, unless you have a rare item which can resurrect them immediately. Even then, the user interface for character management and recovery is clunky, and the process is poorly explained. Once the character’s final life is up, though, they are gone. Unless you’ve put serious time into having a backup character to replace them, you’re stuck grinding again. Combined with everything else slow and grueling about Stranger of Sword City, permadeath becomes the final straw.

These are all problems that could be forgiven in the face of a compelling reason to fight, of which the game has few. There’s fertile narrative ground in the game’s core premise, even if more than a little reminiscent of J.J. Abrams’ Lost. The people from our world are stranded in this strange dimension, but gifted with powers, and set out to slay the monsters with the hope that with enough power they can discover a way home. With the exception of one particular fascinating character--a dying child in a mech suit living in a shipwrecked ocean liner--most of the story is draped into interminably boring anime tropes, and with permadeath as a core concept, the game doesn’t even bother dishing out much in the way of dialogue or backstory. You’re playing as interchangeable cannon fodder.

What ambition Stranger of Sword City has can be found better implemented elsewhere.

There’s something to be said for the continuing efforts to keep turn-based RPGs viable, and Stranger of Sword City in particular shows a commendable willingness to at least try fusing new ideas with still-viable concepts of old. However, without characters even worth caring about to drive it along, Stranger of Sword City is left leaning on its gameplay, which is comprised primarily of the most laborious, antiquated aspects of the genre. What ambition it has can be found better implemented elsewhere. 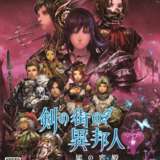 Justin Clark spent 34 hours wandering the wastelands with his motley crew. He is still dumbfounded how the blacksmith is able to stay in business with his outrageous pricing model. GameSpot was provided a copy of the game for the purpose of this review.