More than just a classic action game, Sonic CD is an exemplary port of a retro game to a modern platform.

History has not been kind to the Sega CD add-on, which has largely been regarded as a failure. Still, the console did have several excellent exclusives, among which was an ambitious time-hopping adventure in its most popular franchise. Sonic CD was one of the games that made a Sega CD worth owning. While its cartridge-based brothers saw frequent rereleases, Sonic CD's reissues on the PC and GameCube (via the Sonic Gems Collection) were clunky and inaccurate, as well as missing features. So it is with great celebration among Sonic series fans that Sega has rereleased Sonic CD on modern platforms as a download game, but what makes it even sweeter is the care and effort that has gone into the conversion.

Sonic CD is very much a game in the classic Sonic vein. As Sonic, you run, spin, and jump around colorful, themed areas; you collect rings, smash enemies, and interact with varied environmental gimmicks. Whereas Sonic 2 and Sonic 3 favored more open stages with lots of speed-boosting contraptions, Sonic CD's stages reflect the more cluttered feel of the original game, with elaborately designed backgrounds and decorations littering the landscape. It's incredibly difficult to simply speed directly through a level in Sonic CD because various traps, enemies, and deviously placed obstacles can send a careless hedgehog reeling.

This approach to stage design has its advantages because Sonic CD is laden with odd little one-off gimmicks and hidden surprises (see if you can find the hidden goddess statue--it even gives you an achievement!). It also influences the overall stage design in interesting ways: Collision Chaos is filled with more high-speed springs and bumpers than any other Sonic zone, while Metallic Madness is a maze that can loop endlessly if you don't pay attention to where you go. Some of the stages, however, have experimental elements that prove to be more frustrating than fun. The much-despised Wacky Workbench level features a magnetized floor that sends Sonic soaring up to the stage's ceiling at the slightest touch, which practically destroys his ability to run for long distances.

In fact, running long distances anywhere in Sonic CD is quite challenging, but there's a design reason behind it. Sonic CD's major selling point in its day was its time-travel feature, which greatly increased the size and scope of the game. Each stage has four variations: a past, present, a good future, and a bad future. And each one has different graphics, music, stage elements, and designs. Travelling through time is accomplished by touching a specially marked "Past" or "Future" signpost and then keeping up a consistent high speed for about five seconds to initiate a time warp. This is often easier said than done. Though some stages have areas well suited to time travel, others require careful obstacle dodging and knowledge of level layout to maintain a consistent speed. Figuring out where and how to initiate time warps is part of the game's challenge.

Time travel yields many benefits. Going into the future, for example, means that enemies will be worn down from years of use and less of a threat to Sonic. However, by default, the future is ruined by Dr. Eggman's pollution and incredibly unappealing from a visual standpoint, with broken and malfunctioning machinery spoiling the landscape. To fix the future, Sonic can instead travel to the past, where Eggman has set up a robotic control machine. The past is often the most difficult of the level variations, but destroying the machine in the past changes the default future into a good future, which is bright and colorful, entirely free of enemies, and often features fewer traps and obstacles. Running through the default future might be the fastest way to finish the game, but taking full advantage of the time-travel system to restore the future is the more satisfying way to play.

The interesting level design and the time-travelling gameplay have long made Sonic CD a fan favorite, but the superb port of the game to the Xbox 360 makes an already excellent game even better. The port has been codeveloped with longtime Sonic fan Christian Whitehead, and it's a fine showcase for his custom Retro Engine. The game supports full widescreen display on HDTVs, and a variety of filters allow you to choose between smoother, modern-looking 2D visuals or authentic-looking pixel art that looks practically flawless in high resolution. Other varied visual enhancements show up throughout, ranging from the smoother scrolling of the once notoriously choppy special stages to cleaned-up and polished background elements and enemy motions. You can also select between the original Sonic CD spin-dash (which increases Sonic's speed based on time spent holding the buttons down) and the Sonic 2 and Sonic 3 spin-dash (where rapid button presses increase speed).

What makes the package even sweeter are the copious extras included. You can freely choose between the Japanese and US soundtracks to the game, though a few of the vocal songs have sadly excised the lyrics due to rights reasons. The original Sega CD edition of Sonic CD offered a host of hidden goodies and unlockable bonuses, such as staff artwork and sound tests. These are all present in the port, along with a major new feature: After completing the game once, the ability to play as Tails is unlocked. Tails' flight ability adds a wholly new element of exploration to the stages, allowing easier access to difficult-to-reach spaces.

While Sonic CD is an amazing conversion, there are a few minor issues that keep it away from port perfection. Some rare bugs rear their heads here and there, leading to odd camera shifts and occasionally falling through solid objects. Most players will not encounter these issues in a typical playthrough, however. A few areas where Sonic is forced to travel at high speeds for a lengthy period of time have also been altered so that they no longer trigger time travel to prevent players from warping by accident. While it's nice to not have to worry about inadvertently warping, experienced players may be angered that these places are no longer usable when an easy time warp is desired. Finally, a feature of the Sega CD original that allowed you to restart at the beginning of the current time zone at the expense of one life is completely missing. Because certain areas in some levels become blocked off after proceeding past them (and Sonic CD has next to no instant-death pits to voluntarily kill oneself with), the lack of this feature makes it hard to reach and see certain portions of levels.

Despite a few minor issues, Sonic CD is among the more impressive retro ports seen on modern platforms. Not only is the game faithful to the original, but it's also just plain better in many ways. And at a mere $4.99, it's a tremendous value to boot. If you remember Sonic CD fondly, there's no better way to enjoy one of the most treasured games in the series. And if you missed out on this one entirely before now, this is a superlative way to experience a beloved classic for the very first time. 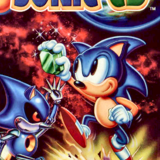