It's been a long time since a beat-'em'-up like Redeemer--something so dedicated to the cause of simple punch-kick-shoot mayhem above all other concerns--has hit the scene. It's a niche whose modern torchbearers can be too complex and involved to achieve that kind of casual, pick-up-and-play hit of kinetic brutality. On the other hand, some are too busy trying to be cartoonish and above the pseudo-self-seriousness that guides classics like Streets of Rage or Double Dragon.

Redeemer makes a fine attempt at hitting the sweet spot between both philosophies, though, with a perfunctory story about a Russian ex-mercenary named Vasily ditching his old life in favor of living as a monk at a Shaolin temple. The past isn't done with Vasily, however, and when the bionic-enhanced PMCs come knocking on the temple's door looking for him, it's time for him to go back to work.

The story is less First Blood and more late-night Cinemax cult film, but there's still a tonal bullseye to hit between total mayhem and dour wartime parable, and Redeemer is off by a few inches. The story, told in comic book-style splash pages between levels, is the kind of gritty, grimdark tone worth making fun of, but it's delivered completely straight-faced before dropping you into scenarios of complete lunacy involving cyborgs and flesh-eating mutants.

It's not necessarily badly done, but it's highly incongruous. The aesthetics employed during gameplay lie upon an equally vast spectrum of tone and quality, with some environments and effects--fire, in particular--looking rather beautiful and breathtaking, and others appearing blurry, like a painting that's been rained on. That range in graphical fidelity can vary from scene to scene, but even at its best, Redeemer can't hide its often monotonous level design.

Still, the main event is the combat, which has its own balancing issues. For the first hour or so, Redeemer feels like Final Fight by way of Gauntlet: a top-down brawler against a never-ending slew of soldiers, with one button to punch, one to kick, one to block, and one to dodge. For a while, the only real complication is the introduction of a button to interact with the environment to pick up temporary weapons, toss objects at enemies, or (when close enough) insta-kill foes using your surroundings.

This can be fun, albeit mildly uninspired. The game doesn't offer any combos to perform, and there's no tangible difference between spamming punches and spamming kicks against every enemy, aside from the latent need for variety. In addition, while the game goes heavy on blood, the camera is too far away by default, only zooming in for context-sensitive finishing moves and the last blow struck against an a wave of enemies, Arkham-style. That distance keeps the game from achieving the brutal excitement of smiting one's enemies with extreme prejudice, where many of the game's finishers--which also feel a bit hurried--are indiscernible in busy scenes.

The game starts to get reckless in a hurry about throwing new twists at you. There's a half-hearted stealth element that allows Vasily to sneak up and assassinate enemies while their backs are turned, which is really just a convenient way of thinning a herd that, more often than not, will turn into a frantic, bloody mosh pit of five or more foes anyway. It's the addition of guns that ends up throwing off the formula the most, however, turning the game from a quaintly satisfying beat-'em-up into a less-gratifying riff on design principles from Hotline Miami.

Later in the game, a disarm mechanic is introduced to supplement Vasily's parry ability, which essentially robs the game of its casual nature and turns it into a game of strategy--the likes of which the more rickety mechanics aren't deep enough to sustain. Factor in the lack of variety in the enemy design after the mutants come out to play and a tendency to conflate difficulty with “throw more enemies at the player,” and after about five hours, Redeemer is in danger of numbing you to its minor charms, creating more work than it's worth.

Fortunately, Redeemer teeters but never topples over the line into drudgery. For what it's worth, the added mechanics do at least introduce a variety of options for dispatching the legion of enemies Vasily faces in his bloody rampage toward vengeance for his fallen temple. There are smirking joys to be found in the right situation where Vasily snaps a soldier's neck, steals their shotgun, blows away two of his buddies the next room over, and finishes the third with his bare hands. Redeemer's a game that clearly has its heart in the right place but feels the need to justify or enhance a genre that needs less to succeed than one might think. 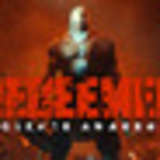 Justin Clark got through Redeemer's campaign in about seven hours using a complimentary copy of the game provided by Sobaka Studio.