In Professor Layton and the Miracle Mask, thoughtful puzzle design shows that the series is still at the top of its game.

Despite the killer robots, masked megalomaniacs, and evil scientists in Professor Layton's universe, there's something endearing about a place in which all problems can be solved with a puzzle. If solving a riddle could defuse any situation, the world might very well be a better place. This kind of whimsical concept, coupled with a charming plot, is one of the largest appeals of the Layton games. And thankfully, that charm remains intact in Professor Layton & The Miracle Mask. The series' shift to 3DS has allowed developer Level-5 to revitalise the top hat-wearing hero, casting him in a bewitching new outing that makes fantastic use of the 3DS hardware with clever, rewarding puzzles and imaginative visuals. Miracle Mask is Layton at his intellectual best, and this thrilling adventure proves that he still has what it takes to crack the toughest of cases.

The plot of Miracle Mask follows on from last year's Spectre's Call (known as Last Specter in the US), with Layton, Luke, and Emmy being summoned to the mysterious tourist town of Monte d'Or, a Las Vegas-like city in the middle of a vast, arid desert in England. Clearly, Level-5 are happy to use some creative license in regards to UK geography, but that's part of the charm. The neon glowing signs and bustling main streets of Monte d'Or stand in stark contrast to Layton's academia and Luke's 19th century Cockney chimney sweep demeanor.

If it seems unusual to wax lyrical about the locations in a Layton game, all becomes clear once you see Monte d'Or rendered in glorious 3D. Gone are the (admittedly gorgeous) 2D backdrops, replaced by bustling three-dimensional areas that are rendered in a way that shows off the 3DS's more subtle capabilities. Areas appear on the top screen while you slide your pointer around using the touch screen, allowing you to peer left and right, up and down in 3D. The magnifying glass cursor pops into and out of the screen, disappearing off into the distance as you examine a building at the end of the street, then jumping to the foreground as you scroll over a character standing by you. At first, the new control method feels inaccurate since you're dragging and not tapping, but very soon it becomes second nature, and the tiny loss in accuracy is a fair trade-off given how great the system is.

This neat system even creates an illusion of depth with the 3D turned off by tilting the image and adjusting the cursor size. You can zoom in on points in the environment, often in order to peer around or behind objects. There's a real feeling of the world coming to life, and the use of 3D space is some of the most impressive to date on the handheld.

Additionally, the characters are now three dimensional models. This change allows for more cinematic moments, with in-engine cutscenes cropping up that enable the characters to interact with each other a little more dynamically than the traditional Layton method of putting conversing characters on either side of the screen, although there's still plenty of that too. Thankfully though, Level-5 hasn't done away with the gorgeous 2D animated cinematics either, and the fabulous Layton art style looks better than ever in subtle 3D.

At first glance, The Miracle Mask's plot seems somewhat similar to last year's Spectre's Call, with an investigation into a mysterious evil presence menacing a town. However, while Spectre's Call descended into rather tenuous silliness in places, Miracle Mask takes a more logical approach to its conundrums. It features Sherlock Holmes-inspired sections where you're able to deconstruct the 'miracles' by answering multiple-choice questions in order to explain the science behind the villainous Masked Gentleman's acts.

Elsewhere, the core puzzles are much as you'd expect, although thanks to the shift to 3DS there's more variety here, and even the returning puzzles are revitalized thanks to the improved presentation. Some of the new puzzles involve rotating a 3D model, whether to guide a ladybug through a maze (charmingly set on a cob of maize) or to examine a cylindrical poster. These all make for simple, yet effective and fun uses of the technology. Then there are the more typical puzzles--block sliding, Solitaire, pattern recognition--well-travelled by any Layton veteran, but well spaced-out here, with few repeated puzzles and plenty of one-off logic puzzles and riddles thrown in for good measure. The puzzle design is tighter than in the previous games, and while there's nothing really surprising here, the logic and wording have been improved so you're never left second-guessing a conundrum.

There's the usual wealth of minigames too, with the typical 'guide a toy around a course' game providing an entertaining distraction in the form of a rampaging robot. Elsewhere, a shelf-stacking game manages to be one of the highlights of Miracle Mask, tasking you with chaining together similar items across oddly-shaped shelves in order to dupe a customer into buying every bit of stock. It's compulsive, challenging, and one of the best puzzle types in the game. Then, finally, there's a Nintendogs-inspired minigame in which you have to encourage a bunny to become a classically-trained actor. It's as cute and funny as it sounds.

Miracle Mask is an example of a game series improving rather than changing, but to great effect. It retains the familiarity of past games while managing to eliminate the fatigue that can often be associated with a long-running franchise. Despite this game being the second part of the Layton prequel trilogy, it's a perfectly fine jumping-on point for new players too, with only a small amount of required reading needed in order to catch up with things--a sensible decision given the shift to new hardware.

How Level-5 could make Layton feel all-new is a puzzle in itself. One thing's for sure though: they've made a huge effort to improve on the existing template in every way possible. The adventures of Layton and Luke are as charming, funny, head-scratching and engrossing as they've ever been, and five games into a series which has stuck to the same structure throughout, that's an impressive achievement. With the promise of daily downloadable puzzles for an entire year and the best presentation yet, there's never been a better time to get on board with Layton. 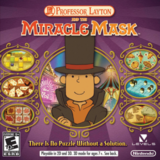