Professor Layton and the Last Specter is yet another absorbing outing for the puzzle-solving English gentleman and his friends.

Which shape comes next in a logical sequence? How old are three children whose added ages equal 13 and whose ages multiplied equal 36? Was the last item ordered at table four a cup of tea, a plate of toast or a glass of juice? If you enjoy getting just enough information and then puzzling out the answers to questions like these, there's a very good chance you've played one or several games in the Professor Layton series. The Last Specter is the latest chapter in the exploits of the famous archaeologist and puzzle-solver, and it doesn't deviate from the template of its predecessors. This brings with it a feeling that you've played this game before, but seeing Layton again is like seeing an old friend, and with its poignant story and satisfying assortment of brainteasers, the Last Specter is great fun despite its familiarity.

The Last Specter is the fourth Layton game to be released, but its events take place prior to the other entries. Here, you learn the tale of how Layton and his trusty apprentice Luke first met, and you meet Layton's assistant, the wonderfully spirited Emmy Altava. The trio investigates the mystery of a massive, fog-shrouded specter that periodically attacks Luke's hometown of Misthallery and meets an arrogant new villain who seems poised to become the Moriarty to Layton's Holmes. As in earlier games of the series, the hand-drawn look of the lovely environments pulls you into the quirky European world. The music, simultaneously whimsical and melancholy, is also a fitting accompaniment to the eccentric characters and unusual situations you encounter. Terrific animated scenes advance the story at key intervals, bringing emotional weight to this bittersweet tale.

As Layton and his companions conduct their investigation, brainteasers arise at every step. These come from villagers requesting assistance with conundrums they can't quite work out and from the professor and his friends themselves, who stop in their tracks to share puzzles each time they spot something that reminds them of one. These puzzles are sure to satisfy anyone who enjoys a mental workout, but they aren't categorically different from the puzzles seen in earlier Layton games. There are still mazes you have to work your way through while stepping on each square only once; logic puzzles in which you must work things out with the facts you're given ("A lives west of B. The red roof is east of the yellow roof."); and situations in which you must figure out how to row animals across a river while meeting specific conditions, such as "The chicks on the riverbank must outnumber the cats." Despite their similarity to earlier entries, the puzzles in The Last Specter are still rewarding to solve and varied enough that you won't get tired of jumping through the same mental hoops over and over again.

Although you need to solve puzzles to advance through the story, you don't need to do all of them, and if a certain puzzle isn't to your liking, you can usually get by without solving it. The Last Specter also employs the same generous hint system seen in earlier games. As you explore Misthallery, it's a good idea to tap environmental features that stand out because these often conceal hint coins. Each puzzle has hints you can purchase with these coins; the hints start off with little nudges in the right direction and build up to clues that often spell out the solution. This system, along with the freedom to avoid most puzzles you don't care for, keeps enjoyment high and frustration low.

The Last Specter also includes a few minigames that get added to the professor's trunk as you progress. In the Toy Train game, you must figure out how to lay the provided train tracks on a course so that the train passes in front of each station before making its way to the goal. The Fish game presents you with a fish tank that has coins spread throughout; your goal is to place bubbles in specific places so that your speedy fish ricochets off of the bubbles and continues collecting all of the coins before time runs out. Lastly, Puppet Theater is a simple game in which puppets act out a play, and your only role is to periodically select the correct action for your puppet to perform from a list. These pursuits aren't as involving as progressing through the story, but they're pleasant inclusions that can occupy you for a few minutes here and there.

Similarly pleasant is Professor Layton's London Life, an included role-playing game that's entirely separate from the main game. You start by designing an avatar that has decided to start a new life in this miniature town populated by pixelated people. Just wandering around and talking to the residents of Little London is amusing; you might meet Beacon, who says that the sophistication at the museum smells like chicken tacos, or the mustachioed and scarf-wearing Stachenscarfen, who says that without his scarf he suffers from "crippling spells of neck coldness." You can get work doing things like picking up trash or driving a taxi or a bus, and you can spend your easy-earned wealth on new clothes, room furnishings, food, and other items.

The game's box touts London Life as "featuring over 100 hours of gameplay" but the reality is that it's unlikely to keep you absorbed for nearly that long. It's fun for a while to earn money, move into new, more luxurious apartments and help the residents of London Life with their simple problems. But even after just a few hours, you find yourself repeating the same simple jobs and tasks. Still, the pint-sized versions of Layton characters that populate Little London are incredibly charming, and it's nice to pay this cheery town a visit from time to time.

That same charm permeates every aspect of the Last Specter. The perpetually top-hat-wearing Hershel Layton is just as delightful a companion here as ever; his love of puzzles is infectious, and his refined demeanor brings a cultured air to the entire game. Those who have travelled with Layton on his earlier adventures will find that this outing feels familiar, and even some of the brainteasers may bring about a sense of deja vu, but the Last Specter's original story and many hours of wholesome puzzle-solving make it another great entry in this elegant series. 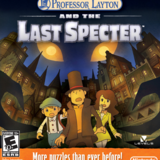