There is no ethical consumption under capitalism.

Like failed empires of the past, I found myself caught in a hyperbolic debt spiral in Offworld Trading Company. My Mars-based colonial corporation had invested into energy production, and one of my rivals detonated an EMP through my plants, disabling them. As the market for electricity boomed, I had to purchase it at increasingly higher rates to keep my company afloat. Within a few minutes I'd gone from a solid AAA credit rating with negligible debt to a lousy D and millions in the red. But hope wasn't lost. Even as it seemed like my neo-capitalist empire was on the brink of collapse, I was plotting my comeback.

I bought up some land on prime locations, taking care to keep them far apart so I couldn’t lose control of my critical buildings all at once. Then I built some new geothermal plants--the most efficient and productive energy producers available--before employing hackers to jack up the price of power even higher. Then I used a series of black market options including labor strikes and dynamite to disable the power plants of my competitors. Soon I was the only supplier of power around and I was selling it for ten times what I'd paid just a few minutes before. My debt evaporated in seconds and I crippled my foes, causing their stock prices to tumble. I sold off some assets and bought my competitor's shares up. And it was all over.

Offworld Trading Company isn't like any other strategy game I've played. There's no combat. There is only the free market. You assume the role of a CEO of a new company eager to take advantage of the virgin Martian landscape and turn massive profits. But you're far from the only company on the block. Much like the colonial trading companies from the Age of Sail, your aim is to outsell and out produce everyone else. Stock and commodity prices are your tools, and hostile corporate takeovers your strongest weapons.

In that sense, Offworld works like a microcosm of real-world economies. Your first move is to pick a founding location--and get to work organizing your supply lines. From there you'll sort out which goods would be most productive to crank out given the situation at hand. And just about everything factors into that decision. If you found your company near good supplies of carbon, but you need to send transports halfway across the map to access silicon, you'll need a lot more fuel. More fuel means you need more money to secure the same resources as another company and that cuts into your profits. Even with only a smattering of basic resources--water, power, carbon, silicon, iron, and aluminum--you'll find a complex web of interesting choices and decisions that you'll have to make on the fly.

Offworld's black market system exponentially magnifies your strategic options, making each round different from the last.

A big piece of that is the black market. While trading resources for profits would be great on its own, Offworld mixes in some less than legal tactics that you, and each of your competitors, can bring to bear. Whether it's destroying critical structures with dynamite (everything is fair game except for your opponents' headquarters) or deploying an underground nuke to reduce resource yields for your competitors, there are more than a dozen nefarious options for the unscrupulous trader.

As games progress, the black market and its affiliated thugs become practical necessities. Even if you can maintain your company without the aid of goons or pirates, you won't be spared for long. This is the price of unfettered competition, and while it'd be a frightening reality, in this context it's a non-stop stream of brinksmanship that encourages sophisticated and nuanced tactics. Shady though it might be, Offworld's black market system exponentially magnifies your strategic options, making each round different from the last.

Playing off these options are a series of advanced buildings. Most of your early structures are bare essentials: farms, water pumps, mines, etc. But once you've got your company going, you can start developing patented, advanced technology or create a bunker to house a cadre of hackers that can manipulate prices. These bleeding-edge structures are your proximal goal. They boost your ability to stay competitive and give you an ever-expanding field of options to leverage. If you're losing goods because of piracy, you can research more efficient ways to produce those resources. If prices have tanked on Mars, you can launch oxygen and food to eager consumers in the asteroid belts.

Once you start playing with these toys and blending their abilities with those offered by the black market, games get cooking. If you need to keep your hacking clandestine, you can use an illegal hologram to disguise your programmers' barracks. Or you can disable or wrest control of a profitable Offworld Market to pull in some serious capital without having to invest in the expensive launches yourself.

When you pack eight players onto a map, you'll have so much corporate reconnaissance and sabotage that it can be a bit tough to keep track of it all.

If I had one complaint from this system, it'd be that when you pack eight players onto a map, you'll have so much corporate reconnaissance and sabotage that it can be a bit tough to keep track of it all. You'll have a news ticker in the bottom right that will try to keep you updated on who's been hit with what, but it's not enough when things get crazy. If you're overwhelmed though, you can always tune the game speed down a bit to help you take control of the chaos, so it's more of a nitpick than a foundational problem.

When all of these systems play together, it's absolute magic. There's a thrill in knowing that no matter what happens, you always have a response. Offworld gives its players an exceptional spread of options so that they can always think their way through a problem. The questions then become, can you think faster than your opponents, and if so, can you adapt as they shift their strategies to match your own?

Offworld is ruthless. It is fast, and it is brutal, and with so many possibilities available at any time, the game teeters on overwhelming. This is saved, at least in part, by a stellar series of tutorials that introduce you to all of the game's major features. It teaches you how to manage hostile takeovers, how to protect your own stocks from buyouts, how to combine the abilities of your buildings for maximum effect, and how to plan your corporate campuses so they run at peak efficiency. And it does all this with an acerbic wit that parodies hyper-capitalistic figures of the 1980s. Item descriptions and character dialogue are a treat If you're a fan of apocalyptic tongue-in-cheek humor. That penchant for cleverness runs through to the core.

The campaign does plenty of heavy lifting to acclimate new players to the game's complex gameplay. It introduces you to some other core concepts, switches up the victory conditions a bit, and gives you a string of skirmishes that help you build a planet-spanning oligopoly alongside your rivals. This lets you test out some of the game's more complex tactics in a scenario that otherwise resembles a protracted multiplayer match stretched over a much longer period of time. By the end, you're well-equipped to tackle ranked games and competitive play. It's a splendid difficulty pitch that serves as the ideal introduction.

Every moment from that initial decision until the final stock purchase is incredible.

I had feared, when I started, that Offworld Trading Company would wear thin after a few games. But that moment never came. I still find every match exhilarating. From the time I bought stock in my opponents, sold them quickly to crash the price and then bought them out a few seconds later, to the time when I managed to keep three launch pads going all at once to reach stupendous riches, every game is memorable. Each map is randomly generated, and with four factions that have distinct strategies that all work with different resource distribution patterns, even the opening is never quite the same. Echoing the classic Civilization question of whether it's best to found your nascent country where your settler begins or to explore for better options, you'll only be able to see certain parts of the map at first. You can either scan for better drop locations, or take what you see. But if you wait, another company can claim vital real estate before you, and you may find yourself with precious few options for critical resources later in the game. Every moment from that initial decision until the final stock purchase is incredible. I haven't even scratched the surface of all that you can do here.

It's a bit chilling to think that in Offworld you're playing out the same obsessive pursuit of capitalism that led to the fall of its finctional Earth--an event hinted at in tutorial dialogue--yet it's so recklessly entertaining and biting with its satire that I couldn’t help but get lost. When combined with truly deep and intricate strategic options, Offworld is a revelation. It's almost unparalleled in the genre. Each and every game is thrilling. Every moment is a challenge. And the brutality of the free market ensures that you can never rest on your laurels, less you be quashed by the invisible hand.

View Comments (38)
Back To Top
9
Superb
About GameSpot Reviews 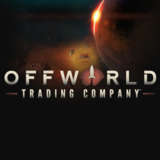 Dan Starkey spent more than 20 hours playing 30 games and two full campaigns of Offworld Trading Company. GameSpot was provided with a complimentary copy of the game for this review.