Metal Gear Acid 2 adds plenty of new content while maintaining the great gameplay of the original.

Metal Gear Acid was one of the more unusual but surprisingly great launch titles for Sony's PSP. Now, barely a year later, there's already a follow-up. While not much has changed in that time, Metal Gear Acid 2 manages to deliver the same unique, strategic gameplay with the trademark style and oddball humor that Metal Gear Solid is known for, making it another great addition to your PSP library.

Metal Gear Acid 2 picks up as Snake and his companions are returning to America after a hard-fought mission. Snake is suffering from some serious amnesia, and is hoping to recover his past when he reaches friendly soil. Turns out Snake isn't getting a friendly welcome upon his return home. He's arrested by a man posing as an FBI agent and is coerced into completing a secret mission in exchange for his and his friends' freedom. Snake is taken to a weapons research facility, where he has to infiltrate the complex, gather some important evidence about the wicked scientist who, apparently, is orchestrating a hostile takeover using his advanced weapons systems. Of course, the story gets much more convoluted and bizarre than that, although it's relatively straightforward compared to other games in the Metal Gear series. You'll meet plenty of new characters, crazy bosses, and massive metal gears as you uncover the truth behind the research facility and Snake's clouded past.

The story is told through lengthy text exchanges that take place between each battle. The dialogue ranges from silly to overly dramatic, which feels right at home in a Metal Gear game. The static character portraits that accompany these scenes look fantastic, and the whole game has a great, unique sense of style.

To further the campy tone of the game, Metal Gear Acid 2 comes packed with a Solid Eye peripheral. The Solid Eye is a simple cardboard box that you slip over your PSP, and when you activate Solid Eye mode you can play the game in 3D. The effect looks great at first, but it's not practical for playing for more than a few minutes at a time because it makes some parts of the screen difficult to see. (Not to mention the fact that you'll start to feel like you're going cross-eyed if you try to play for more than 10 minutes.) You can switch between Solid Eye mode and regular viewing mode at any time during a battle, so if you want to see how a particular boss looks in 3D, you can slap on the peripheral for a few minutes and then take it off and continue playing. There are also several unlockable movies that you can watch in the Solid Eye theater. These short clips include cinematic sequences from Metal Gear Solid games, as well as some videos of girls playing with guns and modeling bikinis.

Aside from the Solid Eye, Metal Gear Acid 2 doesn't do anything remarkably different from its predecessor. You collect cards, which you can use to create a deck. You then take that deck into battle and use those cards to perform actions such as moving, attacking, or healing. The battles are all turn-based and take place in multitiered, grid-based stages. Each character gets only a certain number of actions per turn, and each time you use a card it counts as one action. Using cards also increases your cost, which basically works as initiative in this game. In each round of combat everyone's cost decreases, and the next person to reach zero cost gets to take a turn. There are cards that affect both your cost and the number of actions you can perform each turn, so you're ultimately limited only by the cards in your hand.

There are more than 500 cards in the game, including movement cards, weapons, items, traps, character cards, and link cards, which activate automatically when certain events take place. All of the cards in the game can be leveled up as well, which can significantly improve or sometimes completely change the way a card works. You get some cards from battle, but you can also purchase packs of three cards in the card shop. There are four different card sets, each pertaining to a certain Metal Gear Solid game and containing items, weapons, and characters specific to each of those games. To purchase or upgrade cards you need points, which you earn by clearing stages and defeating enemies in battle.

You can control up to two characters in battle: Snake, and a new character named Venus, a deft female mercenary who also happens to suffer from amnesia. The two characters use the same stock of cards, but you can customize each deck individually as you see fit. Both characters level up as you progress through the game, gaining increases in maximum health points and deck capacity.

The weapons in Acid 2 are standard MGS issue, and they are just as confusing to use as in the first game. If you played the first game, you'll pick up the equipment system without a problem, but if you're new to the series you'll probably struggle for the first few battles. It works like this: You have two equipment slots that you can fill with gun cards. To use those equipped guns, you have to use another gun card that has the same ammo type as the equipped weapon. It's confusing at first, but once you get the hang of it you'll understand that there's a lot more strategy to building a deck than simply using the strongest cards in your library.

The battles in Acid 2 offer plenty of variety to keep you on your toes. There are basic battles where you simply have to clear a room of enemies, there are gimmick battles where you have to do things like dodge trains or avoid being knocked off a bridge, and there are plenty of great boss battles. You'll fight several bizarre test patients, such as a giant ape creature with detachable arms, a guy who carries an oil drum and sets everything on fire, and a strange fellow who walks on the ceiling and confuses your characters. Of course, you'll also encounter plenty of generic guards, patrolling robots, and sentry guns. How you deal with the enemies is up to you. In several battles the objective is to simply get from one end of the stage to the other. In these situations you can try to kill every guard you see, but that will alert more guards who could end up overpowering you. If you prefer to take the stealth approach, you can belly-crawl through tight passages, hang from ledges, or try to knock out your enemies with nonlethal weapons.

After you get the system down and learn the ins and outs of putting together a deck, some of the battles do seem a bit too easy on the normal difficulty setting. But there's still plenty of challenge to be found in simply adapting to the variety of scenarios you'll find yourself in, because no two battles are ever quite the same.

Another problem you'll occasionally encounter during battle is not being able to see what's going on. Sometimes this is intentional, like in missions where you're in search mode and your vision is limited to the few squares right in front of you. Other times, it's simply a matter of poor camera angles that can't quite reach into some of the confined spaces you'll often find yourself in.

The graphics have been given an overhaul for Metal Gear Acid 2, from the bright yellow menu screen to the stylized, colorful look of the characters. The cel-shaded style creates a comic book aesthetic that is a nice break from the simple greys and greens of the previous game. The unsteady framerate from the original Metal Gear Acid has thankfully been put to rest for Acid 2, which runs smoothly whether you're in a room full of exploding barrels or are being trampled by a Metal Gear several stories tall.

The story could take you anywhere from 15 to 20 hours to complete, depending on how long you spend replaying battles to earn points and new cards. You can replay any stage that you've cleared with all-new objectives, which range from searching and elimination missions to slightly less-standard missions that require you to do things like advancing through the stage before your deck reshuffles. In addition to replaying the story stages, you can also play the new arena mode, which lets you play a two-on-two battle against some familiar bosses from the Metal Gear Solid franchise. If that still isn't enough, you can link up with a friend in an ad-hoc battle to see whose decks are better.

With more than 500 cards and a variety of modes and missions, you won't get tired of Metal Gear Acid 2 anytime soon. Acid 2 doesn't make any drastic changes to the series' formula, but it delivers the same great sense of style and humor wrapped around a deep and enjoyable collectible-card strategy game. So even if you've played the first game, there's enough new content here to back up the familiar but solid gameplay. 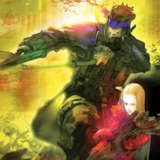