Marvel's popularity has grown exponentially in the 10 years since Marvel Ultimate Alliance 2 was first released, as forays into shared universes in both film and TV have propelled the company to the forefront of pop culture relevance. Previously obscure characters such as the Guardians of the Galaxy, Captain Marvel, and Black Panther have risen to prominence thanks to appearances in movies, becoming household names, while new characters like Miles Morales, Ms. Marvel, and Spider-Gwen have made their debuts in the vibrant pages of comic books. The stacked roster in Marvel Ultimate Alliance 3: The Black Order reflects the past 10 years of Marvel's history, assembling a cast of beloved characters, both old and new, that extends its reach into almost every corner of the cosmos. The diversity of Ultimate Alliance's playable characters has always been the series' strongest aspect, and that remains true in Ultimate Alliance 3, where our favorite heroes team up for an enjoyable adventure brimming with synergized action.

Much like its predecessors, Ultimate Alliance 3 is an isometric action-RPG, hack-and-slash hybrid featuring four playable characters at any one time that you can switch between on the fly. There are a couple of left-field character inclusions counted amongst its comprehensive roster, like the monster-hunting Elsa Bloodstone and The Inhumans' Crystal, but it's an otherwise familiar list of names that features everyone from Hawkeye and Doctor Strange to Iron Man and Thor. Somewhat predictably, the plot revolves around the Infinity Stones after a Guardians of the Galaxy-related mishap scatters them across the Earth and into the hands of the evil-doers in Marvel's rogues' gallery.

Thanos and his ruthless Black Order play their part, but the story is less Marvel Cinematic Universe and more Saturday morning cartoon. That works in the game's favor, and the light-hearted writing and enthusiastic voice acting carry a narrative that does as much as it can with so many characters vying for screen time. There are fun one-liners, and the characters feel true to the ones we know, with their iterations pulling from the MCU, comics, and TV. It also helps that this isn't simply a rehash of well-trodden ground, despite the presence of many common elements. Instead, Ultimate Alliance 3 tells an original tale that takes some inspiration from 1991's The Infinity Gauntlet, while also encompassing various aspects of Marvel's films, comic books, and TV shows to create something of its own.

You only need to glance at the roster to see how Ultimate Alliance 3 pulls from every eclectic branch of the Marvel machine. Costumes and character designs are judiciously plucked from numerous sources--all homogenized by a uniform comic book-inspired art style that's full of color. The most important thing about these characters, however, is how each of them feels to play. Each hero has light and heavy attacks that can unleash various combos, as well as four super abilities that are gradually unlocked as each character levels up. There's also a block that negates some damage and a handy roll for dodging out of danger. Simple stuff. What elevates Ultimate Alliance 3's combat is the variety inherent to each of its heroes and the numerous ways in which they work in tandem. Take someone like Captain America, for example, who's all about punching enemies in the face and following up with a vibranium shield to the ribs. He plays a lot differently to a ranged character like Star-Lord, who is ideally suited to fighting from a distance with his dual elemental pistols and flight-enabling jet boots. The differences aren't just restricted to each hero's choice of weaponry or traversal, either; the Hulk is a lumbering force of nature, Wolverine strikes with quick and agile ferocity, and myriad damage types like piercing, ethereal, fire, and ice differentiate each character even further.

Then there are the abilities that tap into every hero's spate of superpowers. An energy meter governs how often you can let loose with these snazzy attacks, but Ultimate Alliance 3 is fairly generous about replenishing any lost energy in rapid fashion. This is important because using these abilities with abandon and combining them with others is a ton of fun. The basic light/heavy combat is satisfying on its own. There's a lot of button mashing, but fights can get pretty hectic when enemy projectiles are bouncing all over the screen, so you still need to be wary of your positioning and be able to avoid danger. Abilities add another layer, letting you blast away a crowd of goons with a wrecking ball comprised of Spider-Man's webs, spin Mjolnir around in a deadly electrified circle, or mow down anyone unfortunate enough to get in the way of Ghost Rider's hellfire bike.

Proximity to teammates also allows you to combine certain abilities with others to unleash devastating synergy attacks that amplify their damage output, whether it's Iron Man reflecting his beam off Captain America's shield or Deadpool tossing a deluge of grenades as Storm shoots a bolt of lightning out of her fingertips. Dole out enough punishment and you can activate a big Alliance Extreme attack that triggers all four of your character's synergy attacks at once, filling the screen with a vivid cascade of particle effects, explosions, and ever-increasing damage numbers. The frame rate can take a hit during these moments, but you're just watching the fireworks at that point, so it isn't really an issue in gameplay.

The diversity of Ultimate Alliance's playable characters has always been the series' strongest aspect, and that remains true in Ultimate Alliance 3, where our favorite heroes team up for an enjoyable adventure brimming with synergized action

The level design is fairly straightforward, funneling you down corridors and into more open areas with little deviation. This does, however, lend itself to a sense of forward momentum as you're constantly encountering new foes to fight. The only thing that slows it down are some terribly dull puzzles that are fortunately few and far between, revolving around pressing levers and pushing boxes, and a camera that has a tendency to get stuck behind objects or jitter up and down when not completely stuck. This is an occasional problem during combat when you're momentarily blind to enemy attacks, but it can be an annoyance when simply traversing as well.

It's a shame you can't just forget the camera is even there because each level takes place in a new location and the environments on show are fantastically varied. Dimension-hopping allows the action to venture away from Earth and into some of Marvel's more outlandish settings as you barrel towards the end credits, and Ultimate Alliance 3 makes good use of the sheer number of enemy factions that exist in the Marvel universe. Within the first couple of hours you'll brawl your way through The Raft and tangle with Spider-Man's nemeses before joining Daredevil and Iron Fist in a battle against The Hand's ninja army. This makes for a disparate mix of enemy types and aesthetics that keeps each level feeling fresh, and the same can be said of the plethora of boss fights you regularly encounter, too.

Facing off against the likes of Green Goblin, Dormammu, and Ultron can be quite challenging by yourself on the default difficulty level. Fortunately, there's a surprising amount of depth when it comes to upgrading each hero. Aside from accumulating XP to unlock more abilities, you can also spend currency to enhance each of their powers, reducing the energy cost or improving their potency. There's also a sprawling hexagonal skill tree that allows you to purchase stat increases that are applied to every hero on the roster, whether you're improving their strength, vitality, and resilience or unlocking various offensive and defensive buffs. Meanwhile, ISO-8 crystals give you the opportunity to apply additional bonuses to specific heroes. It's minute stuff like increasing health or decreasing damage under certain conditions, but it makes a difference and gives you a degree of customization that can be used to turn the tide of battle--and that's without even mentioning the importance of your chosen team's makeup.

Picking heroes that work well together applies various team bonuses that can further enhance their stats. This is based on tangibles like their team affiliation, intelligence, agility, and so on. You could assemble a team of the original Avengers, the X-Men, Defenders, or Midnight Sons and see an increase in particular stats that will also take into account whether any of the heroes have shared traits like "wisecracking warrior" or "anti-hero." Maybe you want to compile a team of web-slingers, Marvel royalty, or one that encompasses the women of Marvel. You have the opportunity to recreate canon teams or mix and match to create your own based on which bonuses are applied and how they can benefit you.

The only problem with all of this is that heroes only level up when you use them. Increases in strength, vitality and other similar skills are applied to everyone, but as you reach the latter half of the campaign, the lack of abilities, their upgrades, and the capability to equip multiple ISO-8s is keenly felt in your lower-level heroes, which means you end up neglecting most of the roster because they just aren't powerful enough. The workaround for this comes in the shape of XP boosts you can discover within levels and by completing optional Infinity Rifts that task you with repeating modified boss fights and challenges to earn different rewards. Getting enough XP boosts can be a long, grindy process, though, and that's just to get enough to significantly level up a single character. The diversity of Ultimate Alliance 3's roster is one of its core pillars, so feeling restricted to only using a few heroes during its final hours is a glaring disappointment.

After spending some time with Ultimate Alliance 3’s online co-op, it’s clear that while the server performance isn't perfect, it also isn't too bad. There's some occasional lag that only affects the appearance of other players in your party, causing them to slightly jitter when moving around. Other than being a minor eyesore, this doesn't impact the gameplay in any way. Playing with fewer than four people is less than ideal, however, as the host is the only one with the ability to change heroes on the fly. Everyone else is locked into their pick, although this is somewhat rectified by the plentiful amount of S.H.I.E.L.D. stations found within each level that allow you to swap characters in and out. Beyond this, playing more of Ultimate Alliance 3 in co-op emphasizes the game’s replayability and the sheer enjoyment derived from using its assortment of heroes. Going back and replaying parts of the campaign gives you the opportunity to use characters you previously neglected, making it easy to fall into a groove that’ll have you eager to reach the end credits for a second time.

More so than its predecessors, Marvel Ultimate Alliance 3: The Black Order excels because of its character diversity and the ways its disparate heroes work together. For this reason alone it's an ideal co-op game, whether you're playing with another friend in the same room or with three friends online, but the AI more than holds its own if you're playing alone, too. It falters in places, but there's still nothing quite like the Ultimate Alliance series, and this long-awaited third entry makes it a triumphant return for a superhero brawler that feels more relevant than ever.

View Comments (88)
Back To Top
8
Great
About GameSpot Reviews 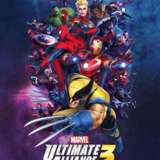 Richard finished Ultimate Alliance 3's campaign in around 10 hours and completed a number of optional Infinity Rifts. Review code was provided by the publisher.