Mario Golf is an excellent adaptation of the N64 title, and it's a Game Boy experience that stands well on its own.

One of the first bits of text you'll see when you fire up Mario Golf on the Game Boy Color is a line that reads, "Everyone who tries golf falls in love with the sport." Nintendo obviously hasn't tried its collective corporate hand at the slew of golf titles out there that not only threaten to make first-time golfers run away screaming, but try the patience of even the most seasoned, tolerant golf-video-game fan. Nintendo's naivet&eacute; certainly has something to do with the fact that its Mario Golf game on the N64 is probably one of the coolest things to happen to the sport and that the Game Boy Color version is no exception.

There are several modes of play: tournament, match game, stroke, training, and a vs. mode for two players. You start out each game, no matter which, at the clubhouse. This is where you choose and create your golfer, go through training, and generally find out anything you need to know about the game you're about to enter. When creating a player, you choose a male or female and give this golfer a name. You then enter the Marion Club as a student. Your goal? Become a pro and meet up with Mario, the "best golfer who's ever lived."

The match game pits you against one of several other golfers. Two are available immediately, and you'll open up others as you go along. You play 18 holes, and the best score wins. Throughout the game, you'll have other objectives to meet, such as winning the longest-drive competition or earning marks for getting your ball closest to the pin on the first drive.

Stroke mode is a basic practice round that lets you train and open up characters. Tournament mode is an ongoing event that places you against strings of other golfers. Training mode teaches you how to approach different types of situations, judge the wind, and choose which club to use for what type of shot, and so forth. The vs. mode is just that - you play against a linked friend. There are four courses to start out with, and they offer a variety of terrain features, such as seaside, dunes, the basic Marion Club course and the Palm Club level. If playing 18 holes of golf on these courses doesn't grab you, there's also a minigame event that lets you compete for stars.

Essentially, the Game Boy Color Mario Golf is a scaled-down version of the N64 game. The game is unique in its ability to make golf games intuitive, fun, and charismatic - thanks to the licensed characters. The meters in the GB game are easy to read, even if you have never played golf games. There's one mark to begin your stroke, one to determine the length of your stroke, and one to actually begin the stroke (standard). You watch the wind, as determined numerically through an "mph" indicator on the meter itself. You can hit the B button to catch a close-up of where a particular shot will land, and scan from overhead for a big picture image of where you are on the hole.

One problem with the game is that putting can be tough because the amount of precision required surpasses the graphical capabilities of the system - you just can't seem to consistently get close enough in to see if you're really on top of the cup. Plus, you don't have the benefit of an overlaid terrain map to indicate inclines and declines. Arrows drawn on the green can sometimes give you guidance, but they're still not foolproof.

All in all, Mario Golf is an excellent adaptation of the N64 title, and it's a Game Boy experience that stands well on its own. The music is even reflective of the N64's - it varies, depending on how well you're doing, and it's constant without being annoying. The only thing missing, audiowise, are the taunts, and frankly, you'll probably do just fine on your own. 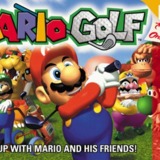 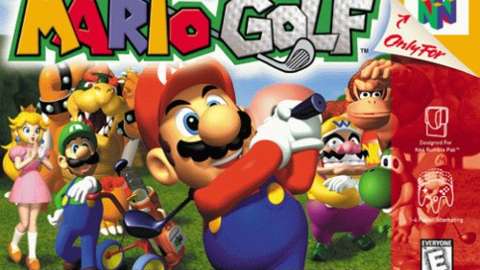 Although Mario Golf is a little on the cutesy side, anyone who wants a great golf game need look no further.