Madden NFL 08 is a good handheld football game, but it offers little new content to make it worthwhile to those who already bought last year's game.

For those who bought Madden NFL 07 on the PSP last year, you are hereby excused from having to buy Madden NFL 08. It's not that the game has suddenly become awful, but this year's installment offers very little that it didn't offer last year. Sure, there's a new challenge mode that replaces the End-2-End mode from last year, a few of the bugs have been cleaned up, and a form of the new "weapons" system from the console versions of the game has made it into the PSP game. But these changes aren't enough on their own to warrant another $40 price tag, and when you factor in some of the holdover issues that still haven't been fixed, not to mention some new problems that debut in this year's game, the value becomes even more dubious. This is still a good, solid handheld football game. It just hasn't evolved much from the good, solid football game that came out last year.

Obviously, the addition of the weapons system to this year's game would seem like a big deal. On consoles, this system was basically designed to provide differentiation between specific types of star players. Using specific icons for each type of player, you could now see the difference between a possession receiver and a big-play receiver, an accurate quarterback and a strong-armed quarterback, a shutdown cornerback and a press-coverage cornerback...you get the idea. On the Xbox 360 and PlayStation 3, this system was fantastic because you could really see the differences in play between the various types of weapons, and the game itself became about finding mismatches you could exploit on both sides of the ball. Not so much on the PSP version. There are certainly some base-level distinctions to be made, but for the most part, players play exactly the way they always have in a game of Madden. There aren't those subtle differences in play styles. Sure, you know the difference between a power running back and a speedy running back, but those have always been obvious differences. Beyond being able to spot who on the field is good and who is not so good, and periodically being able to fix a mismatch you might not have otherwise noticed, it doesn't feel like there's much value to the system on the PSP.

Fundamentally, Madden 08 plays the same solid game of football it did last year on the PSP. The running game is pretty well balanced, and the passing game is also good, though perhaps a bit overpowered. On all difficulty levels but the highest, there are basic post routes in which you can pretty much guarantee a big completion just about every time you do them with a good and reasonably speedy receiver. The defensive backs just don't seem to be able to stop these routes with any level of consistency, meaning you can exploit them quite regularly. Defense is relatively untouched mechanically, save for the addition of the new hit stick from the console versions, which lets you specifically decide if you want to hit a ball carrier high or low. None of the other little tweaks to the defensive controls from the console versions, like the ability to focus coverage on a single receiver before the snap, are in this version.

At least a few issues have been cleaned up, although some new ones take their place. The bug from last year's game in which quarterbacks would sometimes decide to take a nap on the field and let the play clock run down to zero appears to be gone. In its place are buggy punt returns. Punt returners will sometimes simply be unable to get into the spot where the ball will land, even with plenty of time to do so. The good news is that they don't subsequently touch the ball, which would allow the defenders to pick it up and run for a touchdown. The bad news is that players from the kicking team will then run up to touch the ball, but sometimes be unable to. Even though they're clearly kicking the ball around as they try to down it, the game never registers it. Consequently, the ball just keeps getting kicked farther down the field until eventually the game figures out that the ball should be down by now.

There's holdover bugs, too. You'll still run into bouts of wide receivers and defensive backs getting tangled up in one another, yet without a pass-interference call. At other times, offensive linemen will bunch together like a mass of huddled immigrants at Ellis Island, which causes the running backs to get tangled up in their vibrating bulk, and tacklers essentially find themselves unable to get past the pile to knock the ball carrier over. Stalemates like that can last up to 15 to 20 seconds in spots. It's not a frequent issue, but it's not pretty when it happens. The artificial intelligence continues to have issues with clock management, and also tends to give up late in a game and punt the ball, even if its team is behind in score and already at the midfield mark. We also found a few spots where the time-out for the two-minute warning just didn't occur, though not with any regularity.

Despite the few bugs and quirks you'll run into, the game plays about as well as any handheld football game you'll find. But is that really enough to make it worth your while if you already picked up last year's game? Not really, especially considering the dearth of new feature content. What's here is certainly solid, but it doesn't offer much that Madden 07 didn't. The minicamp modes are basically identical to last year, and the franchise mode, while still deep and engaging, has only seen a few interface tweaks. There's still no owner-mode functionality, and the whole mode is still slow as a snail trapped in molasses, due to the insane amount of time it takes to simulate through any part of it. Multiplayer is both ad-hoc and online, though neither actually work very well. Lag seems to plague just about every game in either mode, though it is considerably more problematic online.

The one new mode actually replaces the new mode from last year's game. End-2-End is gone, and in its place are the superstar challenges. These challenges take scenarios from last year's season and have you play them out yourself. Play as Chad Pennington and take the Jets down the field for a winning drive in the fourth quarter, or take control of Shawne Merriman and have the Chargers stuff the opposing team and prevent them from scoring, or kick a 62-yard, game-winning field goal with Matt Bryant (and the aid of 20mph winds behind you)--you get the idea. It's actually kind of a cool addition to the game, though there's only 25 of these scenarios, and you'll likely blow through all of them in just a couple of hours.

Not much has really changed with Madden 08's presentation, either. The graphics look a bit crisper this year, and it's easier to make out details like player faces and smaller details on the uniforms, but beyond that, you're basically looking at the same graphics engine as last year. A bit of the new animation from the console versions has made its way into the PSP game, specifically some of the new tackles, but that's about it. Commentary is at least a bit better at stating the correct situations on the field than in last year's game, though it's still the sort of dull, repetitive commentary from Al Michaels and John Madden that EA has been recycling for years now.

If you already bought last year's Madden on the PSP, you don't need to buy this one because it's not different enough to warrant the $40 cost. If you didn't buy last year's game, the gameplay is solid enough and there's enough content to make this a worthwhile pick-up for those who want to enjoy a little NFL action on the go. 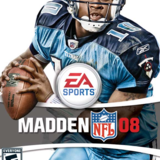 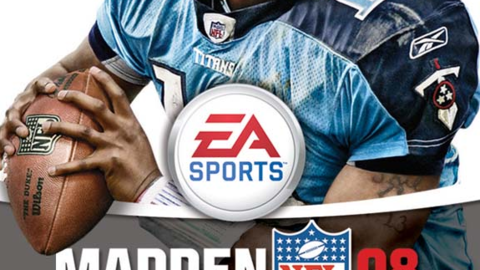 Madden returns for the 2008 season.