So much of the appeal of the original Professor Layton games on Nintendo DS comes from the sheer warmth. It's a mahogany-toned warm blanket of a series of detective games. The puzzles might be non-sequitur brain-busters, but when it's all over, you're welcomed back into the game's world with all the comfort of a cup of tea. Come now, chin up, don't worry about how annoying that last one was, here's another bad pun to soothe what ails you.

Layton's Mystery Journey: Katrielle and the Millionaires' Conspiracy walks the series back to that original warmth of its humble roots in the visual mystery novel genre. It's a game that revels in its relative simplicity the way the series hasn't in some time. Dig in deep enough, though, and you'll find a game that conceals more than a couple of devious surprises under its sunny exterior.

The latest entry in the Layton's Mystery Journey series once again takes place in a sort of Studio Ghibli-fied version of turn-of-the-century London. The hero detective this time around is the good professor's cheery, aloof, and persistently hungry daughter, Katrielle. She's joined by Ernest Grieves, a straight-laced and faithful assistant if there ever was one, and a basset hound who Kat names, in the game's single laziest pun, Sherl O.C. Kholmes. As it turns out, Sherl is actually suffering from Detective Pikachu Syndrome: He's able to talk to a select few humans, but he also has amnesia so he has no idea how exactly he got into this mess. Unfortunately, poor Sherl has to stick it out for a while longer, since the intro is the last time the game addresses his whole predicament in any meaningful way.

The game's lack of an all-encompassing narrative is par for the course, however, and for most of the play time, it's not necessarily to its detriment. The usual Layton series storytelling returns: It's a visual novel at its core, with long stretches of dialogue with various characters broken up by point-and-click puzzles. As opposed to the earlier games' overarching mysteries, however, Katrielle's first outing is actually an episodic affair, where each case is its own self-contained little tale of low-stakes peril, ranging from the minute hand going missing from Big Ben to a wealthy madam's missing cat, disconnected from any larger character development for the main protagonists until the literal final hour. What the game lacks in straightforward character arcs that build over the entire playtime, it makes up for in building an enormous and eclectic cast of oddballs and weirdos with hilariously punny names and peculiar quirks. Katrielle's relationship with each character may only last for a single case, but each case is structured in such a way that the broad strokes--the frequent clapbacks, one-off zingers, friendly jabs at everyone's expense--are allowed to make an impression. As far as the narrative is concerned, each new character is made to be memorable, not practical. And the episodic format makes it easy to enjoy the game in short bursts. Even if you only have a few minutes to spare, you can meet someone new, push the story forward, or finish a crucial puzzle.

Well, you can try to finish a crucial puzzle at the very least, but not all of them are pushovers. In lieu of any legitimate detective work, most of what you'll be doing to help take a bite out of English crime is solving a vast series of one-off puzzles of various sorts for whoever asks. Some are just basic spatial problems, such as having a vat that holds five gallons of liquid and another that holds three, and trying to figure out how to get four gallons. Others are quirky little mini-games more akin to what you may find in WarioWare, just with a tricky twist like having a limit on how many moves you can make to finish the game. Some, however, are just flat out riddles, and these tend to be the ones that may leave you white-knuckle frustrated.

The game fires its first warning shot early on, with a riddle about the minimum number of times you need to touch a clock to get it to display properly. It's a problem that's very easy to overthink, not because the solution is simple, but because the description of the problem begs additional questions that the game does not answer.

Thankfully, for the vast majority of puzzles, sheer persistence is enough to power through and guess correctly. There are also tokens you can find scattered around every environment that allow you to unlock hints. However, even in cases where the hint walks you right up to the solution, the answer and its explanation can defy common sense in a truly underwhelming way that leaves you less with an "aha!" feeling of brilliance and more of an "oh, come on" feeling of disappointment.

That flaw is even more mind-boggling considering just how well localized and executed the game is otherwise. Each character is charming in their own right, rife with British affectations and deep-cut historical references--the Mayor's name is a play on London's original name from centuries ago. And when the game slips into its all-too-short and oddly placed stretches of voice acting or fully animated cutscenes, it's chock-full of naturalistic and pleasant performances across the board, from Katrielle's gentle lilt to Sherl's stiff-upper-lip aristocratic grumble. No small effort has gone into truly realizing this world, causing the lack of clarity when it really matters to sting all the more.

But, perhaps more than any other game in the series, there's plenty here allowing you to step back from the source of your aggravation and recharge. Exploring each environment turns up special coins that allow you to unlock new outfits for Kat and new furniture for her office. As you progress, you also unlock mini-games that are completely disconnected from the main quest--you can help a local chef cook a perfect meal for the residents of Kat's neighborhood, you can run a maze where you have only a limited number of moves, or, you can play any of the dozens of additional puzzles that aren't connected to progress in any of the actual cases. On mobile, this content was parsed out, piecemeal, over time after release. On the Switch, the game is overwhelmingly generous with content within an hour of starting, and most of it is just as charming and endlessly replayable as the rest of the game.

If there's any one thing truly getting in the way of your joy, it's the Switch itself. The Professor Layton games were staples of the Nintendo DS, taking full advantage of the added screen real estate so whatever you did on one screen didn't block what was happening on the other. The Switch, however, has limitations the DS didn't. Playing in docked mode means using the Joy-Cons to move your cursor around like a mouse, which is nice, but also a bit too fast and twitchy for many of the puzzles. In handheld, you have the option of using the analog sticks to move your cursor, which has the same problem with even less precision. You can also use the Switch's touchscreen, but your fingers are too often in the way of the rest of the screen. This is a game that simply begs for a stylus.

In Katrielle Layton's London, it's a season of golden leaves, stiff breezes, and sun that provides light but less warmth. It's the perfect atmosphere for a game that provides such quaint joys for hours on end, cackling at its next pun, zippy one-liner, or absurd new scenario while putting creaky parts of the brain to good use. Sometimes the breeze is a bit too cold, or there's rain, or, oh, you know, the solution to a logic problem you've been staring at for 45 minutes might be “air” and you hate everything for a few minutes, but it doesn't last, and the next pleasant moment is never too far away. 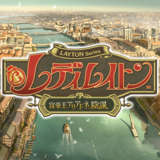 Justin Clark was able to plow through Katrielle's adventures in about 22 hours, at least half of which was spent lost in thought, slack-jawed, staring into the middle distance with the Jeopardy theme playing in his head. Though, really, that's how he usually spends his weekends. A review code was provided by the publisher.