Mercy is not part of Knack's vocabulary. He happily uppercuts a defeated enemy into a steaming lake of molten lava and flings an aircraft by its tail into the unforgiving ground. And don't believe for a second that he sheds a single tear for the pilot engulfed in the flaming wreckage; Knack doesn't let sentimentality distract him from a good fight. The only thing he desires more than brutal destruction is finding creative ways to exterminate his many foes. At least that's how the cutscenes play out. When you're given control, Knack mindlessly punches his way through corridor after corridor of enemies, and you're left wondering why Knack gets to have so much more fun than you do.

Oppression is the theme that binds Knack's overarching narrative together. Goblins have been forced from their lands by the imperialistic humans, and after surviving in the wastelands for generations, they finally have the power to mount a rebellion. Goblins aren't the only creatures who have to deal with oppression. Knack was created by a benevolent doctor who has found a way to turn ancient relics into a sentient being. The philosophical implications of this discovery flip the very notion of life on its head. As Knack muses about the nature of love during a quiet cutscene, you realize that, like Frankenstein's monster, he is capable of self-reflection and poignant observations. And yet, he is treated like a weapon. Does he deserve to be viewed as an equal even though he was birthed through alchemical experimentation? Such ruminations are glossed over. Instead of realizing his humanity, Knack usually acts like a meathead, cracking his knuckles while he waits for his next fight.

Instead of realizing his humanity, Knack usually acts like a meathead, cracking his knuckles while he waits for his next fight.

Relying exclusively on combat isn't inherently bad. There are plenty of games that slowly build on their fighting mechanics and provide enough twists and detours to keep you riveted. However, Knack's combat lacks the necessary depth to captivate your senses. The core problems stem from your meager repertoire. Knack has only five ways to attack the many enemies who confront him, and you learn every one of these moves in the opening tutorial. Three of these attacks--a whirlwind, a projectile blast, and a shock wave--serve as special powers that can be activated only when you collect enough sunstones. Another, your jump attack, propels you toward your enemy as a wrecking ball. But because both you and your enemy recoil when contact is made, you can't use this as the setup for your combos. Which leaves you with the standard punch. So you punch, and punch, and punch some more, for that is how victory is achieved in Knack.

There is weight behind your attacks that makes you understand the pain you're causing, and slow-motion finishers hammer home just how strong Knack is. But solid mechanics mean nothing alone. Because there is such little variance between fights, you're quickly lulled into the bored stupor of predictability. Knack absorbs relics into his body, which allows him to grow from a pint-size pet into a hulking monstrosity. Remember when a mere goblin took three hits to kill? Well laugh at those miniscule fools as you plow through them without breaking a sweat. Behold Knack, destroyer of goblins, devourer of worlds! Sounds pretty amazing, no? No is right. As you get bigger, so too do your enemies, so there's no difference in how fights play out. You still just punch your way to success and perform the weakest double jump known to games, only now you're fighting tanks instead of men.

During a moment of enlightenment, Knack realizes that his ever-changing body can be composed of more diverse parts than just relics. Ice, wood, and other materials automatically get pulled into the vacuum of your body in certain levels, shifting your appearance from runic golem to elemental beast. But said changes are only skin deep. Sure, a flaming arrow may melt your icy heart, so you can lose your outer shell that serves as a shield, but there's no mechanical difference between normal Knack and his earthy counterpart. Still, Knack does occassionally introduce ideas that hint at a real evolution. For instance, in some levels, you have a crystalline body, which initializes Stealth Knack. It's finally time for some real variety, right? Not quite. With the tap of a button, Knack can walk through the laser beams that serve as a high-tech security system. But enemies can still see you, even though you're invisible. It's hard to stifle a laugh when the doctor says, "No more sneaking around" after an enemy shoots at you, as if sneaking was ever an option.

There are 13 chapters in Knack, and every one of them plays out in the same tired manner. You start out small, gradually build your size until you're huge, and then arbitrarily shrink back down when the chapter wraps up. There's always a convenient excuse for this transformation. How else could Knack fit in a biplane if he doesn't lose his precious relics? And then you start the whole cycle all over again. In the beginning of the eighth chapter, the doctor plainly states that you must grow as large as possible, as if we somehow missed the pattern that has been cemented from the onset.

If you're craving exploration, there are opportunities to veer slightly off the main path if you have sharp eyes. Weak walls can be knocked down to find extra relics and sunstones, along with collectible treasures that imbue Knack with new abilities. There are tons of collectibles strewn throughout Knack's expansive worlds, but these pieces are worthless on their own. If you're lucky enough to complete a set, you get a perk that gives you a passive ability. It wasn't until I reached the ninth chapter that I completed my first gadget, more than eight hours into my adventure. And what did I receive after all that effort? Enemies released a small amount of sunstone power when defeated. Don't expect these collectibles to inject the diversity Knack so desperately needs.

It's hard to stifle a laugh when the doctor says, "No more sneaking around" after an enemy shoots at you, as if sneaking was ever an option.

The most baffling part of Knack is its surprisingly high difficulty. Considering the cartoony artistic design and simple mechanics, you might assume that this game would be a cakewalk. But after you die a half-dozen times in the tutorial, that belief will be banished from your mind. When Knack is in his smallest form, he dies from just one or two attacks, and can stand only a couple more when he's bigger. So death comes frequently. If you're vigilant, you can avoid enemy advances by performing well-timed rolls, but even these should be used with caution. You're not invincible when rolling, so you can't abuse this maneuver. Now I love a good challenge, but dying is an annoyance in Knack because the combat sequences aren't interesting enough to play through once, let alone multiple times. There is a cooperative mode if you need a helping hand or want to offer one. Knack is as vulnerable as ever, but the second player controls Robo Knack who respawns after dying. Sadly, the action isn't any more fun when you're dragging a friend along for the ride.

Knack's downfall is that it focuses entirely on combat, but doesn't offer enough variety or depth within its system to compel you onward. Any early thoughts you may have that there must be more to the punch-punch-repeat action than meets the eye are banished once you plow through hours of the same basic sequences. And even Knack's few attempts at diversity are merely competent. The occasional platforming scenario lacks the joy of movement so necessary for jumping to be engaging, and the platform placement doesn't require any cleverness to surpass. There's not one element of Knack to rally around, to excite you. And without that special something, Knack crumbles just like its piecemeal protagonist.

View Comments (1034)
Back To Top
4
Poor
About GameSpot Reviews 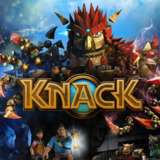 Colorful adventures are where Tom wishes he could spend just about all of his gaming time. Tom played through a finished build of the game and it took roughly 10 hours.