Injustice: Gods Among Us Review

Injustice provides a complex fighter with some unique twists, but is found wanting in features that have become commonplace in its contemporaries.

When it comes to superheroes-turned-street fighters, DC Comics' stable of superfriends have always received the short end of the stick. While Marvel enjoys the steady success of Capcom's legendary Vs. series, the likes of Justice League Task Force and Mortal Kombat vs. DC Universe have not done DC any favors. Injustice: Gods Among Us, the latest fighter from the house of Mortal Kombat, aims to break this combo with a fighting system that builds upon the lessons of MK, while also introducing a few new tricks. But for all its complexities, Injustice unfortunately falls short when compared to its contemporaries.

If you are familiar with Mortal Kombat, you will feel right at home in Injustice. Character movement has that same deliberate, staccato style that's distinct from the fighting genre's Japanese-developed counterparts. That style feeds into the satisfying weight and brutality of each attack, whether it's Bane breaking you over his knee or Hawkgirl taking her mace to your face. Controlling these characters feels powerful, and the destruction you bring upon your opponent and the environment add excitement to each fight.

While MK and Injustice have a similar feel, their underlying mechanics are very different. Injustice has three attack buttons and a special trait button. Whether it's flight, healing, or a simple strength boost, these traits are unique to each fighter and play into their particular abilities and histories. The distinctions are clearly apparent, and don't just boil down to slightly altered punches and kicks.

Clashes are another interesting mechanic. When activated, they instantly interrupt a combo, and then both players secretly spend an amount of their super meter. If the fighter who initiated the clash spends more, he regains health proportional to the amount spent; otherwise, he takes damage proportional to what his opponent spent. Clashes can be used only once per round, per character, and only if the initiator is down to his second health bar. The threat of a clash adds an interesting dynamic to the back half of a fight. It forces you to constantly reevaluate how much meter to save and spend based on what your opponent has stored.

While clashes are only a two-time threat, Injustice's interactive backgrounds are a constant hazard. Peppered throughout each stage are items--a missile here, a motorcycle there--for characters to use. Different characters use these items in different ways. Some use these objects as weapons to be smashed over an opponent's head, while others use them as springboards to quickly navigate the arena. These items are a fun way to augment your fighter's arsenal and take stage awareness to a new extreme. Knowing that a combo could put your opponent near a deadly item might make you think twice before launching your assault.

It's too bad that so many characters simply destroy these background objects. A stone tablet that Batman can spring off of to reach the other side of the screen, Superman just smashes. Superman--along with the game's other heavyweights--smashes almost everything he touches. In some stages, it is too easy to smash all of the interactive objects early on simply to deny your opponent their functions. This is especially troublesome for characters with limited mobility options who need these items to compensate for their shortcomings.

The story in Injustice--while grand in scope--is also full of shortcomings. This lengthy tale presents a world where Superman has reached his limit after being tricked into murdering his pregnant wife and unborn child, thereby triggering a nuclear bomb--which was linked to Lois' heartbeat--in the center of Metropolis. It is a premise so ridiculous it borders on parody, but it's presented in all seriousness. The cracks quickly begin to show as this narrative labors under the weight of finding new reasons for characters to stand around punching each other. By the end, you're left wondering how the game could treat this cornball story with such unblinking reverence.

If you're new to fighting games, you'll find Injustice's educational options disappointingly sparse. An extremely basic tutorial runs first-time fighters through the fundamentals, and that's it. There's a practice mode, but any information on fighting game theory or character-specific instructions is left to independent study. The S.T.A.R. Labs missions, Injustice's version of MK's challenge tower, offer some character-specific instruction, but are more of an enjoyable distraction than a way to prepare for real combat.

To further compound the confusion, other, lesser features are left completely unexplained. Tucked away in the controller settings menu are options for release check and alternate control. Both can significantly impact how you play, but you are on your own to figure out how. The largest omission lies in the frame data. This data provides useful insight into the properties of each move, but unless you know what startup frames and block advantage are, it's not going to do you much good. And, once again, the game offers zero insight.

Online, Injustice offers the basics of player and ranked matches, along with the option to practice online with a friend. Player match options let you fight one-on-one, in a king-of-the-hill style or a survival mode. Unfortunately, replay support is a glaring omission. While players in the same lobby can spectate matches, there is no way to record and replay other fights. Replays can offer fantastic insight for players of all skill levels on how to play their favorite fighters, but their absence further compounds Injustice's educational deficiencies. Matches against opponents within a three- or four-bar connection range run without serious delay. However, falling below this connection range can cause some noticeable lag between inputting a command and having it appear in the game.

Injustice: Gods Among Us is a hard-hitting fighter that plays to the hardcore crowd. Its creative use of background objects coupled with satisfying fighting mechanics make it both fun and distinct from it contemporaries. But for newer players, the minimal instruction modes and disappointing story provide little incentive for your sustained interest. And the absence of replay support is a loss for everyone involved. Injustice is an enjoyable fighter but as a whole, the package is found wanting.

View Comments (157)
Back To Top
7
Good
About GameSpot Reviews 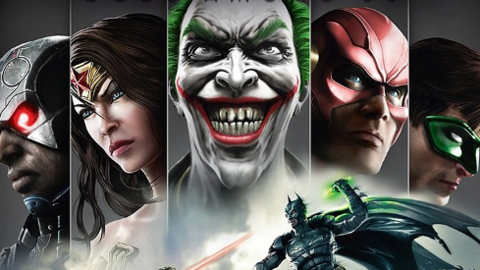 Injustice: Gods Among Us

Injustice: Gods Among Us is a new fighting game franchise from the creators of Mortal Kombat that introduces a deep, original story featuring a large cast of favorite DC Comics icons such as Batman, Harley Quinn, Solomon Grundy, Superman, The Flash, Wonder Woman and many others.