Mediocre packaging and emulation quirks aside, it's hard not to like Final Fantasy Anthology.

When Square re-released classic SNES Final Fantasy titles for the PlayStation in Japan, the more cynical minded accused the company of milking its core franchise; after all, the titles were repackaged with negligible gameplay enhancements and extras. But when Square announced the US release of Final Fantasy V and VI - combined as Final Fantasy Anthology - well, that's a horse of a different color, isn't it? After all, the series didn't hit it big in the US until Final Fantasy VII, and many gamers never played the Super Nintendo installments. Moreover, one of the titles, Final Fantasy V, is coming to the US for the first time ever. So how does the Anthology stack up? As a historical monument of two genre landmarks, it is fantastic; as two individual RPG titles, each is a masterpiece of gameplay and storytelling; but as a modern collection of classic titles, the package falls unfortunately short.

Before its arrival in the anthology, Final Fantasy V was announced and canceled for a US release no fewer than three times. The fourth announcement was the charm, however, and many gamers' favorite Final Fantasy has finally hit the States. So what was the big fuss about? Certainly not the storyline. Unlike the more "modern" Final Fantasies - VI, VII, and VIII - Final Fantasy V features paper-thin characters, a trite and clich&eacute;d plot, and hours of fetch quests uninterrupted by character development or plot twists. The endearingly poor translation doesn't help things, either; it reads like a cross between early-'90s shoddiness and late-'90s "attitude." Think Working Designs without the proofreading - or the humor - and you're close. Making matters worse is that since the game's original nonrelease in 1993, there have been two separate fan translations of the entire game - and both are vastly superior to Square's "official" effort. Yet despite the mediocrity of plot, dialogue, and everything else modern RPGs are so dependent on, there's something that keeps gamers coming back to Final Fantasy V time and time again: rock-solid gameplay.

Final Fantasy V delivers one of the series' most in-depth and detailed game systems: the job system. Each character can be assigned one of 22 possible jobs or classes. Choices range from traditional classes, like knights, wizards, lancers, and thieves, to more esoteric ones, such as chemists, dancers, sorcerers, and trainers. Each class has certain innate skills and abilities (ninjas can use two swords, thieves have high agility, wizards can cast their variety of magic, and so forth). Ability points earned from battle increase the job's level and you'll eventually gain secondary abilities. Each class can then "equip" a single earned ability. This flexibility can lead to powerful combinations: A knight can use the ninja's "equip two swords" ability and then wield a heavy sword in each hand. A monk can use the knight's "wear heavy armor" skill to become a defensive powerhouse. This level of flexibility and ability to customize is what has endeared the job system to many players.

Final Fantasy VI was many gamers' first entry to the world of traditional Japanese RPGs. Even today, its characters and storyline are a high mark for the entire genre. Final Fantasy VI marks the series' turn towards more mature storylines and well-developed characters; the super-deformed graphics mask an exceedingly well-formed story. Over 14 characters join your party - the most of any Final Fantasy game - and they have their own story, motivations, and side quests. Final Fantasy VI is an absolutely massive RPG, and even a skilled player will take 40 to 50 hours to uncover all of its secrets.Final Fantasy VI lacks the detailed system of Final Fantasy V but more than compensates with its large number of unique characters. Each party member has a special technique to use in battle. Sabin the bruiser has Street Fighter-style button combinations; Cyan has his sword techniques; Terra the half-Esper can morph into a more-powerful form, and so forth. You are encouraged to frequently switch party members and sample everything the characters have to offer.As mid- to late-generation 16-bit titles, these games' presentations have slightly suffered. The gameplay remains rock solid, but the graphics appear dated and old-fashioned. Players used to Final Fantasy VIII's six-head-tall characters may be initially put off by the SNES games' squat sprites; players drawn to Final Fantasy VII and VIII for the eye candy will be more than disappointed. Open-minded gamers who understand what they're getting into should have no trouble slipping into the retro-groove, however. Even today, the games stand as masterworks of 2D design.The music, amazingly, has only improved with time. Hearing series composer Nobuo Uematsu's masterworks is a revelation; that such orchestral majesty was wrought from the Super Nintendo's primitive sound hardware is mind shattering. Unfortunately, the emulation process has slightly garbled some of the instruments and sound effects; careful listeners can discern an overall tinniness not present in the SNES versions.In their haste to bring these classic titles to market, Square has skimped slightly on the presentation. Unlike most classic compilations, there is very little in the way of extras. Final Fantasy V and VI both feature a brief rendered introduction and ending, and Final Fantasy VI features an "omake" mode with a monster encyclopedia, battle history, and art gallery. The games themselves are untouched from their original SNES incarnations; aside from the bit of load time here and there, you might as well be playing the original cartridges. The one included extra is an OSV soundtrack of songs reportedly culled from a survey of Square Soft fans. Unfortunately, the survey results posted at Square's web site show that fans' votes were entirely ignored, and the music disc contains as many stinkers as it does glaring omissions.Mediocre packaging and emulation quirks aside, it's hard not to like Final Fantasy Anthology. Gamers get two of the deepest, greatest RPGs ever created for less than the price of a single new game - it's hard to argue with that sort of value. Whether you've waited five years for Final Fantasy V or just finished your first Final Fantasy, the Final Fantasy Anthology is sure to entertain. 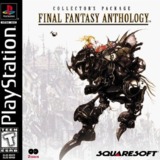