Death by Degrees tries to be a lot of different things, and it fails at all of them.

You know, Nina, if you needed the money, you could have just called us. We would have happily lent you some cash if it meant that you wouldn't have to work in shoddy, uninteresting games like Tekken's Nina Williams in: Death by Degrees. But no, the deed is done, and Namco's Tekken offshoot is a reality. Death by Degrees is a half-baked attempt to combine a combo-based fighting system with some light stealth and puzzle-solving. Unfortunately, no one aspect of the game is done especially well, and the end result will be unappealing to all but the most diehard fans of Tekken's blonde bombshell.

Nina's adventure opens on a cruise ship that is run by an underground organization. There's a fighting tournament happening on the ship, and Nina's poised to win it. But she's really there to do some covert work for a joint mission between the CIA and Britain's MI6. Two Brits are infiltrating the ship in an attempt to find...something. The game's never really too clear about what you're doing and why, but all you need to know is that things go wrong for your stealth MI6 associates, and you'll have to blow your cover and beat the heck out of a ton of different guards.

The Tekken series has turned out some of the best 3D fighting games around, so it's no surprise that Namco has attempted to bring over some of that fighting game flair here. But the fighting system is based off of hitting the right analog stick toward your enemy so you can attack in that direction. This system, used before in games like Rise to Honor, is capable of letting you take on multiple enemies at once, but it isn't up to the challenge of precision, fighting-game-like combat. The game gives you a handful of different maneuvers right off the bat (you'll be able to purchase more moves as you carry on), but simply mashing the analog stick in the direction of your nearest foe is really the only combat technique you'll need to know. Nina can equip firearms and melee weapons, but neither set of weapons is more effective than simply kicking bad guys in the face until they're dead.

Nina's other big attack is the critical strike. This special, high-damage attack brings up an X-ray view of the enemy you're attempting to cripple. Exposed soft spots glow red, and you need to move a cursor to the spot and push forward on the right stick. This then brings the game out of X-ray mode, where you'll see Nina do some sort of unimpressive-looking spin kick or other move. Then it goes back into X-ray vision, and you get to see the bones shatter. Some of these, like when you break an arm or a leg, look fine. But when you shatter someone's skull, the game shows a hokey, pulsating brain. Same deal with the ribs, which reveal a thumping heart behind them. What's worse is that after you get through the first few objectives and reach some tougher enemies, these attacks won't kill your enemy. So, instead, you're made to believe that a guy with no skull protecting his brain can still get up, fight well, and even take a shot or two to the head. The game isn't exactly striving for realism, but this still just seems silly.

When you aren't fighting, you'll spend a lot of time looking at your map and trying to figure out where to go next. Your objectives are spelled out pretty plainly, so you'll never question what you need to do next, even if the story doesn't give you an especially compelling reason to complete your task. But the map screen is sort of a mess, so getting from point A to point B isn't always the easiest thing in the world. The game has a Metal Gear-like security system, but instead of using numbered cards, you'll collect fingerprints with a print scanner, and each print has a security level associated with it. You'll then be able to use those scanned prints to unlock doors. The process of unlocking a door with the print scanner is as simple as hitting the X button, but you'll still have to watch Nina put the scanner up to the door, hit a button when a text message appears to let you know that the door is unlocked, and then watch her walk through. Little things like this add up over time and give the game a sluggish, stunted pace that sucks all the tension and suspense right out of it.

Death by Degrees seems like it's constantly pausing for a second to load something up. Every single thing you want to see on the menu has a brief, but noticeable load time associated with it. Load times for changing areas are also a lot longer than you'd expect from a PlayStation 2 game in this day and age.

Nina's game doesn't look bad, but it does have a slightly dated appearance. The humanoid models look decent, but don't move all that well, and much of the game's texture work is subpar. If you had to find a game to compare it to, visually, it sort of looks like Sammy's Spy Fiction, but with an overt breast-jiggle animation for Nina when she moves. The game's cutscenes are alright, but nowhere near the quality of the intro and endings commonly associated with the Tekken series. The game does have one clever visual trick, though, and that is when Nina gets into a big boss fight, she'll emerge from it with her clothes ripped and she'll be lightly scarred. This helps give the impression that the boss fights are tough, even though they're mostly pretty easy. Along the way, Nina will change into a few different outfits.

Bad voice acting and horrendously repetitive music are the stand-out segments of Death by Degrees' sound. The voice actors put on a weak show here, compounding the dry dialogue with lifeless, deadpan deliveries. The game attempts to use its music in a cinematic fashion by having it swell up when combat starts and fade back to a more subtle level when things are calm. But you'll hear much of the same music again and again, and even worse, the track restarts when you exit one room and enter another. So you'll hear the first 45 seconds of a music track again and again. The menu track's weak, palm-muted guitar line tries to scream "intrigue!"; but it fails miserably. Sound effects like gunshots and the cracking of bones are passable, but there's nothing notable about any of the effects.

Death by Degrees tries to be a lot of different things, and it fails at all of them. The adventure is reasonably lengthy, and you'll even unlock a few additional minigame modes, but the game simply isn't worth completing, even if you're the sort of Tekken aficionado that wants to see some character development in Nina. The best thing that can be said about Death by Degrees is that it comes with a playable demo of Tekken 5, though the demo is limited to one player and two characters, making it too short and shallow to make up for Nina's failure. 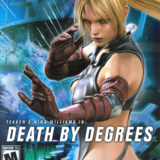 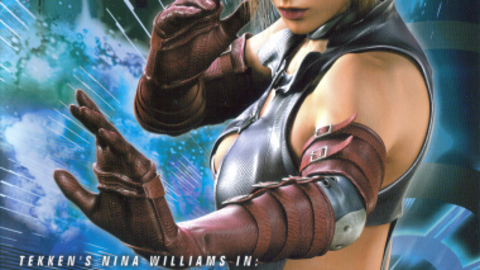 Tekken's assassin, Nina Williams, infiltrates a dangerous underground world as a voluptuous undercover operative. When Nina investigates a hi-tech weapon in the hands of a shadowy organization, she uncovers a world of nonstop danger and betrayal.