Does Brain Age actually make you smarter? We have no idea, but it's still an interesting puzzle game available at a budget price.

Since the heady days of arcade favorites such as Asteroids, Pac-Man, and Missile Command, people have claimed that video games can help sharpen your reflexes and keep you thinking fast. But there never seemed to be any hard science to back it up. Over 20 years later, Nintendo's releasing a product for the Nintendo DS that is squarely aimed at that hard science, making the claim that playing Brain Age: Train Your Brain in Minutes a Day can "make your brain feel fresh and sharp." Well, we're not scientists, so we can't necessarily prove or disprove that claim, but as a budget-priced game, Brain Age is strangely compelling, even though its very nature is brutally repetitive.

The focus of the game's educational aspect is that the activities on display are designed to activate your prefrontal cortex, the part of the brain that controls how you apply what you know. The theory is that by flexing this part of your dome with basic math problems and memorization, you can sharpen your intelligence. The game presents you with a series of different simple tasks that you are to perform daily. Your performance is stored in a profile and displayed via a series of graphs that quickly tell you how well you've been doing. Additionally, there's an overall test that determines your "brain age" based on a sampling of the brains of various people of various ages. The best score you can get is 20, signifying that your brain is as nimble as a 20-year-old. Well, a smart 20-year-old, anyway.

You play the game solely with the touch screen, and on top of that, you hold the DS sideways. Info appears on the main screen, and you answer questions with the touch screen. The tasks you're given are basic math and reading comprehension, with some memorization thrown in. You start out with calculations x20, which gives you 20 simple math problems to complete. From there, you get the harder version, which gives you 100 problems. You eventually get one that measures how quickly you can read, one that asks you to memorize the placement of numbers on a grid, one that asks you to quickly count how many syllables are in a phrase, and so on. There aren't a ton of different tests, but the game unlocks them over time, so you aren't given the opportunity to burn out on all of them right away. For the most part, they're interesting, and if you get into attempting to beat your own score (or the scores of another player that's using the same copy of the game), they can get sort of addictive.

Aside from the brain-training aspect of Brain Age, there's also a multiplayer mode that lets you get into a calculation battle against up to 15 other players using a single copy of the game. But the other additional draw is a lot more compelling than that. Brain Age comes with a substantial amount of sudoku puzzles. The addictive numbers-and-logic game is done very well here, putting the touch screen to use in an effective manner.

The touch screen and DS microphone make the whole game possible. It's a really slick way to play the game, but it's also reliant on your handwriting and ability to speak clearly. When you're rushing through math problems, it's easy to squiggle down something that the game will misinterpret. This is extremely frustrating, as you're penalized for mistakes. The voice recognition doesn't come into play very often, and you can bypass it entirely if you like, but we had trouble getting it to recognize certain words. Over time, you figure out exactly how the game wants you to write and speak and then adapt to it. For the most part, though, the recognition is pretty impressive, especially considering there's no calibration process involved.

All in all, Brain Age is a quirky and unique product that's worth taking a look at, largely thanks to its budget price. Whether or not it's improving your mind or just improving your ability to perform its specific tasks is ultimately unclear, but there's currently nothing else quite like it on the market, and fans of logic puzzles and other basic puzzle games should enjoy it quite a bit. 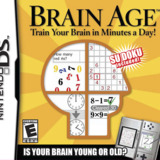 Brain Age: Train Your Brain in Minutes a Day!
Follow