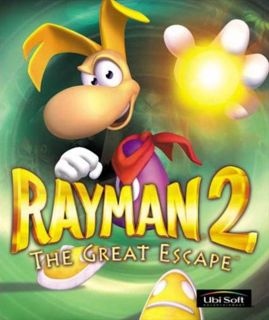 Boros is back! After a particularly miserable hiatus, a good video game tongue lashing may just be what he needs.

Boros here, and, you know, while I've already reviewed Rayman Origins, before that, I never really gave Rayman the light of day. I was a Nintendo kid growing up because of money restrictions, so I never had the chance to broaden my video game scope back then. While I did play the Rayman games, it wasn't really enough to form an actual opinion. You may ask yourself, "Why am I bringing this up?" Well, it's because recently, I had the chance to take a chance on Rayman 3D for the 3DS. I knew nothing of this game before I bought it, and have since played through it. I had no idea that it was a port of Rayman 2, even though remake sounds more like what this is. It was almost a complete train wreck... Almost. It's actually very weird, because the stuff it gets right, it f@%king bulls eyes, and the stuff it gets wrong makes the game seem like a s#!t spewing anal gusher. Also, it's about half and half on the excellence to bulls#!t ratio. Let's take a closer look to see what I mean.

Let's just go over the story real quick, because after Origins, I know the story doesn't matter too much. Rayman starts out captured by pirates but then is saved by his friend named Globox. Rayman then sets out to find a fairy named Ly, who is also a good friend of Rayman, so that he can regain his powers. One thing I noticed is that there is more character developement than in Origins, but it's that boring kind of developement from the N64 era, with generic characters run a muck. Rayman is just a tool, as in comparison to that high functioning autistic from Origins. The only thing giving them more developement is that they talk in this game, almost to the detrament of the game. While no one talked in Origins, I got more of a feel for their personalities because they stuck out so much. This kind of story developement just annoys me, and I'm glad that this kind of thing died EONS AGO!

Just a quick little aside for the graphics, and I don't usually mention them unless they really impress me, or are really a problem. Well, they're a problem here, because they look about 20 years old. From the akward transition between figuring out the full potential of the N64. You may say it's because of the new handheld, but that's no excuse because I've seen much better on this thing, so why couldn't they improve the graphics from the initial release?

Finally, let's talk about the gameplay which is the most important part. It plays like what the Legend of Kay SHOULD have been. If that's too metaphorical, then think of Ratchet & Clank if it had the pacing, movement control, and platforming of Mario 64. It's pretty slow paced and boring usually. Even the combat gets boring, because it doesn't throw enough enemies to make it a decent challenge. It feels like it belonged on the N64, and come to think of it, why didn't I see that this was a port? I've done mentioned how this feels like an N64 game in 3 different aspects, and I guess they didn't age well.

Plus, the ability to strafe one enemy just makes it too easy. In fact, I only died in this game when I either fell into a pit, or during the numerous vehicle sections.

Oh, god! Their back! F@%king vehicle sections! All of the bulls#!t! F@@%@%#$%#@$%#$K!! ...Yeah, I hate vehicle sections in action adventure games. They just feel f@%king shoehorned in games like this. It works in sandboxes because a bunch of things seemed shoehorned in, so it doesn't feel out of place. It also works in racing games (duh), but it doesn't work in anything else to me. However, this game did something impressive that no other game has ever done.

The vehicle sections in this game are just as bad if not worse than all of the other ones I've played. Clausterphobic environments filled with clutter, smacking into anything kills you, checkpoints way to far apart, this game is the works on bad vehicle sections. All, but one. There is one vehicle section in this game like no other. While it still has the instant death bulls#!t and the physics get really f@%king wonky at this part for some reason, you have complete freedom of range to move about in an actual environment, instead of a clausterphobic tunnel. I had a ton of fun just running around exploiting the physics glitches, and blowing things up. The only down side is that when I did try to figure out where to go, it was a pain, but it was fun while it lasted.

Also, the game came to life for me when the pirate ship chases you around, and you have to platform quickly or get blown to hell. This is when it comes to life for me, and it can be a little difficult, but it's so fun, I didn't notice the annoyance I was feeling. It invoked two feelings of fun and adrenaline at once, and while it's not nearly as awesome as the final chase in Origins, at least this game can come to life.

In conclusion, the game has a bunch of cool moments, but also has equal amounts of frustrating bulls#!t, and boring crap to say that this is a skipper. If you love Rayman, check it out, but it won't blow your socks off even then. I thought it was ok, plus I only had to pay $10 for it, and I almost got what I would call $10 worth of enjoyment out of it. So, it's not a bad value game.